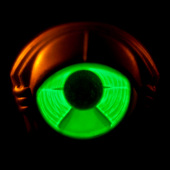 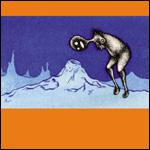 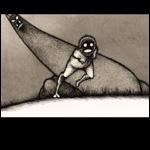 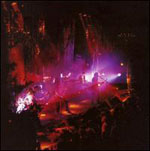 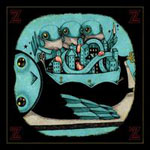 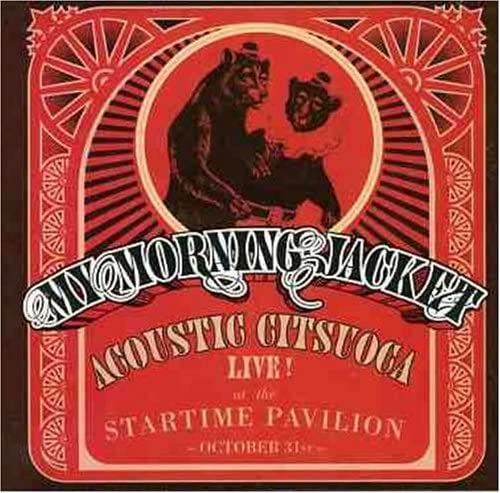 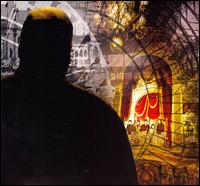 There’s always been something slightly…off about Jim James. Even during My Morning Jacket’s formative years—from the spooky, lonesome beginnings of Tennessee Fire (1999) through It Still Moves (2003)—his songs rarely ended up where you expected them to, and his lyrics veered from cryptic to romantic to goofy. Those who picked up the Chapter 1 and 2 (2004) demos/rarities package will no doubt also recall surreal covers of “Take My Breath Away,” “West End Girls,” and “Tyrone,” each rocking a ridiculous pop bent that has since won the band’s favor, bullying their folk and southern rock roots. (Think Elton John stealing Fleet Foxes’ lunch money. To smoke pot with Steely Dan. On Donovan’s lawn. Um…etc.) Point being: despite often being mislabeled as such, My Morning Jacket were never just a straight-laced folk-rock band, a la, oh, let’s say: America. Years ago we had to dig through EPs and singles for the truly bizarre portents of where they could possibly go, but turns out the crumbs had always been laid.

Those eccentricities finally took over on Z (2005), their first real 90 degree turn. They’d shifted both their line-up and approach to writing/recording, trading for new blood on guitar and keyboard, James’ grain-silo-reverb vocals replaced by an extreme close-up on his inner-Whitney Houston. The band was practically reborn with, well, whatever the hell they wanted: shameless pop, sappy ballads, Guitar Hero rawk, strobe-light-milking pop climaxes, carnival backdrops, a barely-recognizable Andrew Bird cameo (that’s him whistling out Dark Side of the Moon [1973] haunts on “It Beats 4 U”), all with rare focus. Plus: “Dondante,” that perpetual, thunderous cherry on top. It’s both a Grado-wearing stoner’s wet-dream and a potential hit at your next barbeque, granted no one there has a “thing” about dead baby jokes. New and (eventually) old fans rejoiced, and James couldn’t help but hit the ground running after Z‘s trust-fall: if his fans were eating up that record’s many conceits, why not really open things up and let everyone see his, uh, “naked part”?

Which brings us to Evil Urges: the band’s freakiest, most stylistically fragmented album yet. It’s a paean to lust and love, youth and fantasy, faith and sin. It’s ridiculous, juvenile, silly, sexy, and sweet, often all at the same time. It’s a rock record with a lot of canned strings; a disco record with blistering southern-rock guitars; a folk record with blatant nods to the Four Tops and Todd Rundgren. It is possibly the weirdest soft-pop record you will ever hear, and one of the only records of any genre to claim inspiration from both Sly Stone and Kermit the Frog. It even wears lace scarves and skeletal space boots: 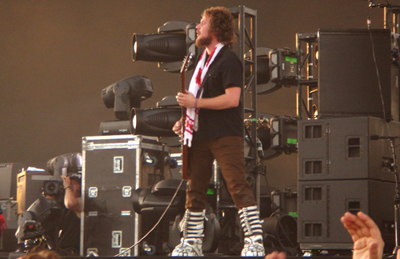 And it’s really, really good. Mostly it’s just an immensely fun record to listen to, immediate and easy to parse even if these thirteen songs (plus “Good Intentions,” for some reason; they must be highly superstitious) are unified solely by James’ fascination with love songs. It’s an album-defining focus that he cloaks himself in, kinda like that cape thing he wore on Conan (hiding a Flying-V, how cute), in turns lustful, idealistic, polite, desperate, spiritual, animalistic, sentimental, and awkwardly perverted. (...And, ok, apparently awkward perverts sometimes make questionable anorexia/Karen Carpenter references in the middle of their geek fantasies, and probably smell awful, but they’re—er, well…this one at least is harmless.)

The title track sets us up for the oddness to come: James-the-Loverman manages to keep his falsetto up with the big, soaring synthesizers and heavy strings, each devoured whole by a vicious minute-long breakdown, only to slither back out for a reprise of his just-fucking-go-with-it tenant: “Evil urges, baby they’re a part of human way / It ain’t evil baby, if it ain’t hurtin’ anybody.” As with Urges‘ bloated whole (at 55 minutes, shockingly still their fourth longest album), the song doesn’t exactly re-invent or transcend genre so much as just leap-frog them enough to keep things interesting. Something else those “Tyrone” and “Rocket Man” covers proved was how this band can interpret others’ work with ease, in every case making it their own—something which translates in key ways here, even if they’re copping a string of specific styles and artists instead of whole songs. So while you’ve probably heard most of this record’s quirks before, you’ve never heard them this playfully clusterfucked.

The most divisive of those fucked clusters is undoubtedly Prince-meets-ZZ Top-meets-the Muppets jam “Highly Suspicious.” It marks the band’s first nose-dive into (intentional) comedy, kinda like Brian Wilson’s “YOU’RE UNDER ARREST!”, except instead of a corny segue the punchline is the entire goddamn song. It’s an obvious and mostly charming gag that even James can’t help but giggle his way through, in no way deserving of the hate it has received. Besides, it’s the album’s sole Benny Hill moment, unless you count how “Sec Walkin”’s AM-pop minutiae echoes Bill Hicks’ classic Jim Fixx/”Who the fuck needs to write a book about running!?” bit: “Left leg / right leg / one leg at a time I keep on walkin’.” “I’m Amazed” and “Thank You Too!” offer reprieve; Goldstein sagely describes the latter as “the cheesiest ‘70s soft-rock ballad this side of Fleetwood Mac, therefore awesome,” and, despite those caked-on strings, it’s a moving reminder of how direct and amiable James can be when he’s not happyslapping us with groaners like “Now daddy’s got you home alone solving your crimes / Peanut butter pudding surprise!”

“Look at You” is similarly adorable, and as close as Evil Urges gets to country-gospel, with James-the-Preacherman laid spiritually bare (“We believe in your power, to lead without fear / Not above, in some tower, but here, right down here, with us in this world… / Let me follow you”) atop Carl Broemel’s gorgeous pedal-steel. Things pick back up with “Aluminum Park” and “Remnants,” the record’s crowbarred-in island of fist-pumping riff-rock, both in the concert-igniting vein of “One Big Holiday” and “Anytime.” (Here’s proof, but also, Okonokos [2006].) “Smokin’ From Shootin’” is the perfect counter-balance: James-the-Beardstroker gets caught up in self-reflection (“Who makes my decisions? / Who reads all your thoughts? / What makes us how we are?”), swooning to one great ‘70s soft-rock hook after another. It’s the album’s stand-out until “Touch Me I’m Going to Scream, Pt. 2” wafts in, all eight glorious minutes of soaring vocals, disco beats, reverb-heavy guitars, and flittering omnichord. It’s over-the-top and more than a little ridiculous, like so much of this record, but it’s chilling when James coos, “If you touch me / Well I just think I’ll scream / ‘cause it’s been so long / Since someone challenged me.” Even better: check how he flips the album-wide Christ imagery as coital mimicry (“Ooh my lord! / Ooh my lord! / Yeah! … This feeling it is wonderful! / Don’t you ever turn it off!”), how the song lasts roughly as long as the average shag (worldwide, according to Wikipedia [Scott and Peter spit on the ground]) and unfolds accordingly, right down to the fading, post-fuck heartbeat. It’s the only way they could have ended this record, peaking musically while also winking at us in the most unsubtle of ways, reminding us to take whatever the hell we just heard for what it is: an absurd, psyche-scraping, barely-above-dick-metaphors pop record about sex and morality called fucking Evil Urges. The only key to unlocking these schticky depths: crank that shit up.

My Morning Jacket has always been an evolving beast led by the unique vision of Jim James, but it wasn’t until Z that we truly got a sense of how fascinating and multifaceted a vision that might be. Evil Urges furthers the reveal with confident and imaginative strides, now with 100% less burning kitten jokes. True, it’s swaddled in all sorts of carefully processed sound and heavily tweaked moments—a questionable production choice, especially for this band, even more especially when it involves string sections straight outta “Nights in White Satin.” But they keep it (relatively) tasteful, making the most of the sheen. Backing vocals crop up in wonderful, unexpected ways, and with (good) headphones it can be overwhelming how tight this band really is, no matter what direction they’re heading in. So while their fifth record doesn’t come close to topping the emotional wallop of At Dawn (2001) and its doomed-no-matter-what sequencing keeps it from being as focused as Z, make no mistake: Jim James continues to push himself as a songwriter and vocalist, in more ways here than any MMJ album before it, and once again it turns out to be wildly compelling stuff.