1. Clear Eye Clouded Mind
2. Waiting for Something
3. When I Was Young
4. Jules and Jim
5. The Moon is Calling
6. Teenage Dreams
7. Looking Through
8. Let the Fight Do the Fighting
9. No Snow on the Mountain
10. The Future 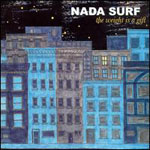 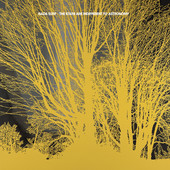 The Stars are Indifferent to Astronomy

The obvious thing about Nada Surf, known to anyone who likes them and attempts to share them with others, is that they lack any kind of easily commoditized allure—no mysterious aura here, no hipster cred, no working class rootsiness. This is a band out of the ’90s, which is only a time period to them, springing as they did from the bowels of ’90s modern rock radio, from a time when MTV’s Buzz Bin was starting to show its age. But despite the launch pad of a novelty one-hit wonder (1996’s “Popular”), Nada Surf has always kind of existed outside of both mainstream and indie cultures—basically a band your dad might like, but your dad’s never heard of them. Straight-up power-pop in the grand tradition of Big Star, Matthew Sweet, and Teenage Fanclub, they’re unflinchingly true to their sound in the face of an ever-changing pop landscape. They make melodic, heart-on-its-sleeve pop music; they’re not cool. And their career, spanning twenty-odd years and seven records, has been the stronger for it.

Nada Surf didn’t really mean anything to me until 2003 when I saw them play in a basement at the University of Minnesota and subsequently fell in love with their third album, Let Go (2002). Let Go remains the band’s best record, a bittersweet collection of moody pop songs about confusion and loss. This was really their coming out as a band, one whose tendency toward sweetness, toward anthems, could be undercut by a gently growing unrest and a murky darkness. Listen to songs like “Blizzard of ’77,” “Happy Kid,” and “Fruit Fly,” and you’ll know what I mean: it’s a rare band that can manage this combination of hopelessness and optimism, of both cleanliness and jangle-pop murk.

Which brings us to the band’s latest effort, ten years later, The Stars are Indifferent to Astronomy. It’s no Let Go. The three records released since then weren’t, either. But on those, as on this latest effort, there’s still that kernel of a great band: something in the often unusual lyrics, in singer/guitarist Matthew Caws’s pure, warm tenor, that makes these songs engaging despite a tendency toward homogeneity. An obvious theme on the record is getting older and ruminating on the past, not exactly a new angle for an aging rock band, but a wistful nostalgia bolsters the best songs on the record, like, first and foremost, “When I Was Young,” the only song on Stars that provides the dreamy chill of Let Go-era Nada Surf. “When I was young,” Caws sings, “I didn’t know if I was better off asleep or up / Now I’ve grown up / I wonder what was that world I was dreaming of?” It’s an odd refrain that manages to capture something very delicate and real. Instead of pining for lost youth, “When I Was Young” is ambivalent, a tone that elevates the album, even through its few clichéd moments.

Though “When I Was Young” is probably the best song on The Stars are Indifferent to Astronomy, the album keeps up a nice momentum, particularly on more upbeat tracks like “Jules and Jim” and “Teenage Dreams.” “Jules and Jim” is a pretty righteous power-pop number, Caws’s Chris Bell-esque voice at its most affecting, and “Teenage Dreams” is similarly tuneful, replete with another strange and memorable refrain: “Sometimes I ask the wrong question / And get the right answer / Moved to a tear by / A subway break-dancer.” The album drops off a bit midway, not losing its guitar-driven charms so much as relying on too many songs bouncy and forgettable. “The Moon is Calling” and “Looking Through” are two cases where the band could stand to rein in their epic leanings; it’s easy to imagine these songs fitting into a preview for Hollywood’s latest uplifting drama.

This kind of uncomplicated pop music is dangerous territory because it can easily become too smooth, glossy, and unspecific: an Everyband peddling universal feelings. Most of the time, though, Nada Surf avoid this trap by trading in specificities, often touchingly so, and treading on their way with a strong, melodic hook. Nada Surf have not reached outside their comfort zone with The Stars are Indifferent to Astronomy. But said comfort zone, in the bittersweet playground of power-pop, is still a place to revisit.