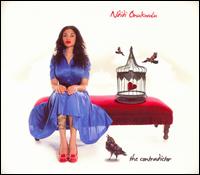 That was harsh. I didn’t mean that.

Wait. Did I mean that? Or, more to the point, was that harsh? I mean, is there anything wrong with being just a soul singer singing soul these days, sans remarkable band? Does such a staid designation doom one, as Oberst predicts, to be “shredded to ribbons beneath a microphone stand?” Onukwulu’s debut record The Contradictor is a tacit agreement that such a simple conceit may not be enough to cut it in the contemporary flooded market of pan-genre indie-studded cool. At press time, the reviewer hasn’t decided whether he agrees that single-mindedness is an artistic liability, but he will say this: if you’ve only got one punch in your repertoire it should land like a mule kick. If it doesn’t, you’re going to need to rope-a-dope a time or two.

See, the more one listens to promotional discs by aspiring acts of varying texture, genre, and quality, the more one is forced to opine on the difficulty—the damned simple improbability—of making a legitimately good record. The fundamental question changes from: “Does this band/act have something?” to “Does this band/act have the thing?” Often there is a tradeoff, conscious or not, between the potential power of singularity and the titillating effects of the variety show.

Ndidi Onukwulu definitely has something, she may even have the thing, but The Contradictor obfuscates this truth by attempting to convince the listener that she has Everything. Well, no one apart from Criss Angel has everything. Those who hold out that they do are overreaching, and as the reviewer undecided on the qualitative properties of aesthetic single mindedness, I’ve spun enough records to know that overreaching is a definite no-no.

The spectrum in the soul/folk paradigm runs closely along the line measuring an artist’s selectivity with which she chooses to deploy the raw power of the primary genre in which any song is steeped, letting it shine out uninterpreted between the cracks in their personal style. On the high end exists the lethally precise Nastasian school of thought where such bursts can be confined to a mere syllable, on the low end are the honking, crescendo-addicted J-Lo-esque, you know, “diva” types.

The overreach is typically a tool of the trade among latter day albums of the big-noise-small-talent set. And that’s what makes this album somewhat odd, because that is obviously not the where Onukwulu belongs. That is to say, the it that she does have is substantial. Her vocals on The Contradictor reveals that she is an oak-solid soul chanteuse with enough of a burnished brass spine at the center of her alto to not have to rely on the smoky “come hither” affectations of lesser genre mates—of which, Norah Jones is the closest referent. (In fact, the Canadian singer even looks a bit like Jones, but has a much sweeter name). There is enough of this brass spine for this album to hang its hat there.

It seems like much more of this material should exist in and thrive on the energy that hums through the album opener “SK Final” when the horns sidle up at the beginning of the first chorus. The band swings through the song breezily and Onukwulu sounds comfortable and confident belting out, “I’m not going to hurt over you again.” Instead, The Contradictor makes the debatable aforementioned determination that “brassy” is an adjective with a half-life of about two tracks, at which point less complimentary descriptors begin to be applied when the songs melt into each other, becoming nondescript. This is why the soul singer is intentionally shredded to less fulfilling ribbons beneath the microphone stand.

There is a logical motivation here: a rounded album, even one with a few errant stylistic experiments, is less likely to drag. I get it. The problem is that the collection of influences here come off more as calculated grabs at eclecticism than actual range. Songs like “Move Together” give the impression of soul-ified covers of previously written works from other genres, instead of original material written by Onukwulu. The contrasting authenticity of the gin joint burlesque of “Forever SZ” raises the question of what The Contradictor could have sounded like if Onukwulu had allowed herself to play more strongly toward the strength of her voice.

At the closing bell The Contradictor still emerges a victorious debut by decision. But Onukwulu’s muscular voice untethered by experimental constraints is the straight right that could have had this listener with his back on the canvas, staring up at blurred and circling lights wondering what the fuck just happened.

In a good way.