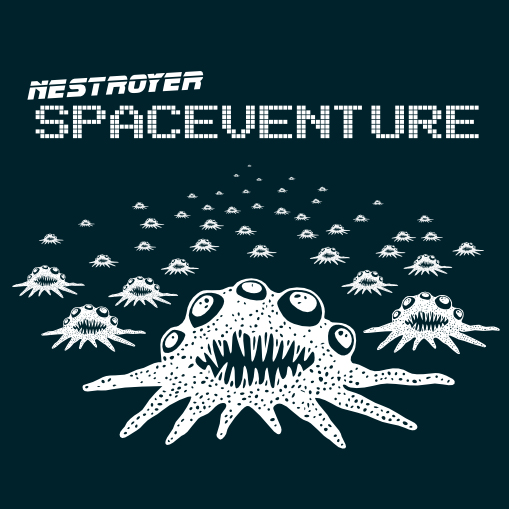 The Finns have been making dark headway in the wake of their recent Columbine situation, so here’s something to countermand those nasty rumours that their country’s only good for Santa and suicide. In fact, Finland has a dry but prevalent sense of humour, some of which gets channeled into this latest button-masher from Turku Atari warrior Nestroyer. A prolific blip-hop MC resembling Jemaine from Flight of the Conchords (tough break), he’s the latest in a procession of sleek nerds to be signed to CalmDownKidder, a little-known British netlabel run from the heart of the Midland’s Game Boy community. Good call, too, as there’s been something of a consensus that the chiptune fad’s in danger of losing its cool, blamed no doubt on some dodgy licensing decisions and the rise of Crystal Castles. Still, if you grew up ranking the Pac-Man games according to their associated soundtracks, then you’ll find Spaceventure is the shot in the arm this scene’s long required. And, Nestroyer can actually hold a tune while bringing the joypad to orgasm. How about that?

As with the other hitters in the 8-bit field, Spaceventure‘s frugal thirty minute running time does it no end of small favours. Genre projects like this also need a back-up knack, and it comes here in the form of an allusion to the concept album that Nestroyer can only unleash in a beta testing version. “No Inertia” may be in position seven of twelve in the running order but it’s definitely the preface of the story, opening with a kung fu amateur hour motif before coasting into a phaser shootout. The title track, on the other hand, is perhaps the program’s menu screen, warning anyone wishing to go further that they’ll be needing gallantry and very quick fingers.

If you’re rolling your eyes already, don’t be fooled into thinking Nestroyer’s just another shut-in trying to squeeze some fresh screeches out of his microchips. He writes rock sleaze scaled down for handheld stadiums, fierce as the toothy mutants assembled on the jpeg cover. While “Thermosaurus” is a song played on yellowing consoles, it’s still got a melody the Killers should be eyeing up to poach: four chords of schoolboy heartache—real schoolboys, with blackheads and anxiety and everything. If you think that’s a trick, wait till the sweet froth of “Engines On!” where pads chatter like speed freaks, invoking the feel of some grand psy-trance number reduced to a pocket-size speaker, or the moment twelve seconds into “Meet My Laser” when you realise Nestroyer’s successfully retconned New Order’s “True Faith” into the Double Dragon franchise. Those LCD hooks just keep on coming.

While the multiplayer campaigns of today can boast professional recording artists on their roster, it’s easy to forget how far an ear for a tune could carry even the most basic of synthesiser kits twenty years ago, back when the pixels needed a beat to do battle over. Try mixing “Wormhole” into your WipeOut HD playlist to feel the effects of pure time travel for yourself, or drink in the buccaneer swagger of “Space Pirates Ohoy!” There’s certainly an opera-like quality to Spaceventure—can you feel the different characters’ analogues coming through in the passion of their creator?—and the record as a whole is perfect for dividing any day into a series of acts/replayable bonus levels. I’m not a completist in the chiptune genre by any means (five albums absorbed to date), but Spaceventure is without doubt the most accomplished summary I’ve heard in the art of using dead technology as a standalone instrument. The relatively harsh percentage I’ve accorded it is more of a precaution than anything, as I don’t fancy getting flamed by an army of forumites all itching to brand me a n00b.