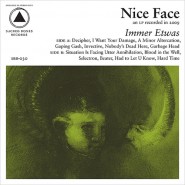 It’s a sign of the times that Nice Face’s short, catchy onslaughts of guitar noise are the peppiest thing on Sacred Bones instead of the most ominous thing on Asian Man: if not for the distorted vocals, one could practically skank along when the band breaks out the synth. Perhaps, then, that to which Immer Etwas points is a generational inscrutability, an unwillingness to either have or kill idols. An obnoxious attitude to hold, for sure, but what sets Nice Face’s steady, assaultive riffs apart from their attitudinal peers is that their punk swagger, if we may call it so, is a complex mirage. Like today’s hipster havens, bars and neighborhoods and living rooms full of tattooed, anti-something youth who can go months without seeing anybody who gives a shit, Nice Face embrace a rebellion past meaning, a subculture which has evolved into a culture parallel whatever it tried to once sneak under.

All of which means: is this some kind of musical gentrification? Mall rock you can listen to without your IQ dropping? Beyond Strummer and Lydon, who’ve struggled against such identification anyway, it all can seem a bit developmentally arrested. Fugazi still gets universal love, but I’ve never caught my friends who own all their albums actually listening to their humorless rants (usually just the part in Instrument where they call out the “ice cream eating motherfuckers”). It could even be said Crass’s dim bombast is indistinguishable from Green Day’s—that even the smartest and most fun bands are forced to maintain an angsty countercultural sheen like a vestigial tail if they want acceptance. But is the current tattooed, anti-something, post-everything moment a positive development for a genre that tends to be a high school pit stop?

Depends. The best moments here are ones like opening trio “Decipher,” “I Want Your Damage,” and “A Minor Altercation,” which whip by on an average of two minutes each, all precise chords and slinky basslines. A surface snottiness dissipates, part of that aforementioned mirage, a fake that’s better than the real thing; a tofu dog. On the other hand, in a repudiation of indie dilettantism, the worst songs are the experimental interludes, where the drum machine gets dialed down over less-than-airtight chord structures; where the synth takes over for the unbreakable guitar. Like their hardcore brethren Fucked Up, Nice Face succeed when they mix genre gore with confident insularity, feigning just enough ignorance to let their smart bits hit hard. The one-word chorus of “Invective” takes the rhetorical effectiveness of Operation Ivy, adds the cleverness of Fugazi, and subtracts the self-importance—I mean, they’re shouting the word “invective” as opposed to actual invective—this is pushing so much further than irony.

Like half the indieverse, all crawling in Ariel Pink’s icky dust, the hooks here take a couple listens to sink in under the record’s distortion. But they’re there, as are multiple concise, brilliant guitar solos. The walking organ on “Hard Time” does the garage-revival thing behind a convincingly gruff face and a deep groove, the synth freaking out like minute twelve of “Sister Ray.” “Gonna give you hard time!” singer Ian Magee shouts cryptically, all badassery on the surface, multiple meanings submerged in near-nonsense.

Nice Face is cockiness without fronting, a gospel of dirty, chanted melodies pulled from under the twin bed into the master bedroom without making a big deal about it. One could practically say they’re bringing it back to the unselfconscious swagger Iggy epitomized, but being as smart as they are distant, a product of a new cultural moment. Immer Etwas means “always something” in German, and like the album, and like this moment, the phrase is familiar and foreign, meaningless and loaded, weighted with portent and quick to blow away. Which can only be a good sign.