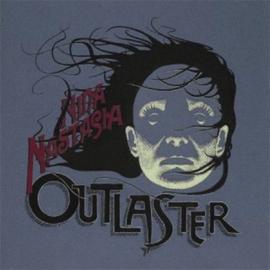 It’s hard to describe what exactly it is that makes Nina Nastasia so utterly compelling in a way that 99% of singer-songwriters, especially those strapping acoustic guitars, are not. When I try, I find myself using phrases rarely associated with music I like anywhere near as much as hers, like “folk songs that emphasize acoustic guitar” and “technically good recordings.” Of course, Nastasia’s music never been that simple, as she and her collaborators choose to work in extremes; 2006’s On Leaving and 2007’s collaboration with Jim White You Follow Me emphasize minimal arrangements, and 2002’s The Blackened Air exists on the opposite end of the spectrum.

Even with chamber orchestra arrangements from Paul Bryan, Outlaster leaves far more unsaid than said, rendering each and every detail vital. Yet this is also Nastasia’s most welcoming and approachable collection of songs in some time, if not across her entire discography—an utterly rewarding, inexhaustible listen. If these songs were not tremendous, this album would be a technical triumph. Nastasia has always worked with partner/musical director Kennan Gudjonsson and engineer Steve Albini; here, again, Nastasia’s voice has room to be both stark and commanding, and more importantly every ornamentation—every drum hit, every string passage, every low-frequency noise that pops up from time to time—isn’t just audible but sounds integral. Songs like “This Familiar Way” and “What’s Out There” don’t simply have quiet-loud-quiet constructions, they swell and contract around the space between notes.

Smartly, single “Cry, Cry, Baby” opens the album with its most straightforward moment, both musically and lyrically. The orchestra plays its most conventional accompanying role here, adding weight to Nastasia’s melancholic vocal melodies in the song’s bridge. “You’re a Holy Man,” meanwhile, quotes the oft-parodied William Shatner-starring Twilight Zone episode “Nightmare at 20,000 Feet”: “Friend, I fear the thing is surely on the wing,” she sings in its chorus, where individual notes try to provide relief from whatever it is that’s threatening to consume it. On “You Can Take Your Time,” the string arrangement provides both counterpoint and reinforcement of her sympathetic, supportive melodies.

Yet the arrangements don’t truly shine until the two songs at the album’s dark center, “This Familiar Way” and “What’s Out There.” The former expands rapidly into a slightly detuned, viciously-sung tango in which almost all of the action takes place in the instrumental; Nastasia’s presence almost bookends the song, leaving its anger and almost threatened violence unsaid but unavoidable. “What’s Out There” takes the opposite approach, and the singer and the song match each other melody-for-melody, mutually grandiose and austere. They are urgent, aggressive, and push Nastasia into territory either new or unexplored since The Blackened Air and expanded upon here.

Like I said, articulating the power of Nina Nastasia’s songs is difficult. One can assume that there’s an intense process of writing and revising at work, which she’s pretty much confirmed in interviews, and that probably has something to do with how she can have the impact she has with so little. Obviously, her collaborators are hugely talented people, so that’s also a factor. But the whole is something so far beyond its parts—her work seems to express certain truths that seem completely beyond words, beyond dialogue, beyond the songs about dialogues she so frequently writes, beyond anyone else working within this genre. In his review of On Leaving, Christopher Alexander said in reference to her back catalogue, “Some of our readers view this site as a consumer guide. If so, then please: buy all of [her] albums as soon as possible. And, while you’re out, buy this one, too.” This stands.