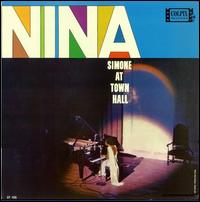 Nina Simone’s career had taken many twists and turns. The kind of artist who attracts long lists of categories (blues, gospel, R&B, pop, and on and on), Simone was a renaissance woman with innovative, classic entries into many of the major genres of her time. For my money, the jazz stuff is the best, though I don’t have any analytical push to back that up. This is an old favourite in the squishiest sense: it’s a long time, worn-blankey, personal favourite of mine, and when I’m feeling low I put on At Town Hall just to feel a little lower.

Maybe we all romanticize our own sadness sometimes, but when a song as gentle and pretty and sad as “I Don’t Want Him Anymore” is playing, it’s hard not to believe the myth. It’s the story of a lover who insists she is fine releasing her beloved to another, because she never really loved him anyway. There’s an intro of tumbling piano and tender insistence, and then, among slowly descending chords, she protests too much: “I could never make him happy / All I ever wanted to do was / [enter bass and brushes] Run my fingers through his curly locks.” It’s all a lie, but nobly told, and in that voice. That wide, thick-honeyed voice.

Despite being pound-for-pound the best straight-up jazz release in Simone’s catalogue, At Town Hall is strangely underrated. Lists of her signature tunes—“I Loves You Porgy,” “My Baby Just Cares For Me,” etc.—neglect the top flight fare here, like the hard swinging “Exactly Like You” or the deep, rumbling burn of “The Other Woman.” Simone even enters the old folk song “Black Is The Color of My True Loves Hair”—here given a vocal performance of impossibly subtlety—into the standard jazz repertoire without getting too much notice. Nevertheless, these tracks have the tight backing and titanic emotional force of the best Nina Simone, if not the best of her era.

Recorded partially live and partially in the studio, At Town Hall does suffer from a bit of the patchiness of Simone’s early albums. It’s strange that both an instrumental and vocal version of “Summertime” are included (or, depending on how you look at it, that Simone’s take has an intro longer than the song itself), and “Return Home” is an unfocused Afro-Cuban interlude. Yet even amongst these distractions, “Wild is the Wind” and Billie Holiday’s “Fine and Mellow” serve up Simone’s soulful jazz with formidable gusto. Her piano is expansive and thrilling without being overwrought, and the rhythm section is pitch perfect throughout. On balance, At Town Hall is an album of underrated classics, filled with stunning performances and one of the finest voices in the history of jazz. It’s all heartbreak gorgeously rendered, and while the few upbeat moments offer some reprieve, Simone’s staggering ballads sing the glory of love imperfect and love lost. That might sound like a bummer, but, in bad times and good, this record has held me soft in its arms.