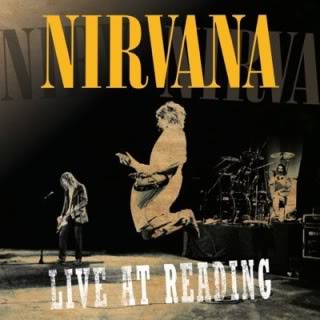 The backstory is there for anyone who wants it: when Kurt Cobain is wheeled onto Reading’s stage, it is mere days after the birth of his daughter, the completion of his latest heroin detox, and the start of an imbroglio with Los Angeles Family Services, who’ve rendered baby Frances Bean away from family Cobain. He had contemplated suicide only the day before (if Michael Azerrad’s account in Come As You Are is to be believed). Renowned journalist Everett True pushes Cobain’s chair, and the gesture is construed as an ironic jab at Cobain’s druggy reputation. He makes a great show of pulling himself up by the mic stand, sings the first line of Bette Midler’s “The Rose,” and then collapses. As shown on Live! Tonight! Sold Out!, the prostrate Cobain then leaps off the floor, in angelic slow-motion, and proceeds to blow the roof off the joint.

It was great theater, even if history would prove that there was more than an element of truth behind the foofaraw. Cobain meant to lampoon his image in order to reclaim his vitality, but in twenty months that too would run out. The band had not played a live show in two months; this could have been an unholy bloodbath. Instead, the night’s set is blistering, funny, and exhilarating, and on stage Cobain asserts control over both his demons and music. “Sliver” may be a raw, heartbreaking distillation of a childhood in divorce, but he refuses to let it overwhelm him, whimsically singing the lyrics at opposite extremes of his range. “Smells Like Teen Spirit” attracted the baser elements of his audience, and did so quickly enough to overwhelm him. The band came to loathe the song, but here he acknowledges the source of its power with a winking, hilariously awful reprise of Boston’s “More Than a Feeling” (sadly this cover, along with Krist Novoselic’s and Dave Grohl’s vocals—one dares not abuse the word “singing”—are omitted from the CD), and intentionally garbles his own song’s guitar solo. They cover “The Money Will Roll Right In,” a self-deprecating nod from the Punk Rock 101. The requisite end-of-show demolition derby is capped off by a taste of, of all things, “The Star-Spangled Banner.” Rather than demolish the guitar, he hands it to an audience member.

But these are the grace notes. Live at Reading proves the corporeal force of the Cobain catalog: no wonder slam-dancing and the band were synonymous. By now it’s clear that the achievement of Nevermind (1991)—and assorted songs from that period, such as “Aneurysm,” “Been a Son,” and the aforementioned “Sliver,” all ecstatically assayed here—was Cobain’s ability to meld Beatle-esque, even twee pop sensibilities with the dynamism inherent in punk, indie, and classic rock. The man himself would tell you the secret was only “loud guitars,” but such a vision would be impossible without a monster rhythm section. Novoselic and Grohl are with him every step of the way at Reading, and the results are blinding: “Come as You Are,” shorn of studio tricks, loses its insularity without any of its tightness; “All Apologies” lacks the lyrical polish of the finished version, but nothing else, and is presented here as a set of waves cresting and crashing; “Lithium,” aided by its crowd sing-along, is nothing less than the promise of rock music fully realized: that for three minutes the right melody over the right chords at the right volume (to hell with the right words, all it takes is a hollered, elongated “yeah,” and the hairs on the back of one’s neck stand at attention; and seriously fuck this dude and his suicide, if his music didn’t help him, it fucking helped ME) can bring transcendence and communion.

It’s tempting to think the band left it all on the stage at Reading. While With the Lights Out (along with the clutch of Outcesticide bootlegs) presents an interesting insight into the band’s creative process, that’s all it is: interesting. The market for The Greatest Rough Drafts of Nirvana directly overlaps with the one for Cobain’s journals, and while there are moments of humor, grace, and brilliance, there are too few glimpses of the band’s viscera. It’s also worth reflecting on Cobain’s digitization in the Guitar Hero video games, a move which caused no small umbrage among the band’s fans and surviving members (and widow). Live at Reading is a corrective to all that, a reminder that nothing so trivial could ever sully music as irreducible as this.