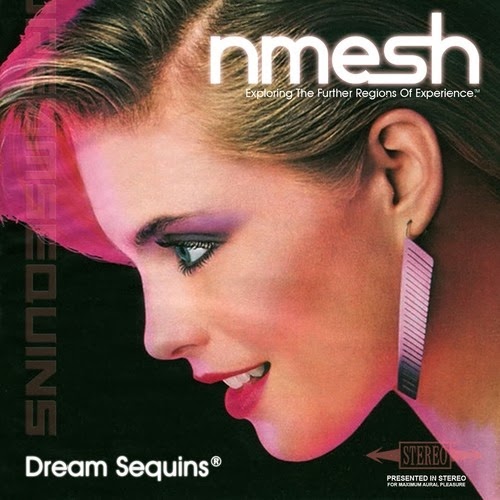 Man, shit just keeps getting weirder, doesn’t it? If you spend a great deal of your existence on the internet (and if you’re reading this review of a vaporwave album on Cokemachineglow.com, chances are you do), you understand the bizarre unreality of the Twitter-verse, how news cycles du-jour run their course before they’re replaced by something equally transient as all the hubs of the internet desperately churn out content until together they form a great, dull din, like the auditorium in the “Band Geeks” episode of Spongebob where everyone’s unabashedly just going “blah, blah, blah.” So here’s this Nmesh album—a curated collage of ‘80s commercials, ancient Youtube clips, dream philosophy, sports broadcasts, saleswomen totally jazzed on Avon, and other weird media shit ripe for an Everything is Terrible recut—clicking on that visceral level that causes music writers, yours truly included, to toss around buzzwords like “zeitgeist.” Because, look, if we’re being honest, the zeitgeist of 2014 is fucking weird.

Not coincidentally, the zeitgeist of 2014 is also “You.” A moment in the second half of Dream Sequins® assures “This is a story about you as you are led through an adventure in your own mind.” Dream Sequins® is the vaporwave nightmare d’année and also something of a state-of-the-genre address. Strange how a genre barely out of its infancy can have a retrospective, but Dream Sequins® feels like a culmination of its various touchstones. It builds the total narcissistic immersion created in albums like Floral Shoppe (2011)—it’s no coincidence that the iconic “It’s all in your head” lyric from that record is echoed by an academic in this one. It turns modernity’s constant stream of media into a hazy trip, like the dream your subconscious would produce if you fell asleep with a radio, television, and looping DVD menu all playing at the same time. Pieces of the din are isolated, de-contextualized, and allowed to bleed in to each other, forming something hellish and seductive, gorgeous and a little terrifying, comfortable nostalgia spat back grotesque and caricatured. “This is a story about you” where nothing is trustworthy or logically sound. It’s ego-death via pop culture, a bizarre landscape constructed from the digital and analog ruins of the immediate past. Best to just get lost in it, because shit is…well, you get it by now.

Dream Sequins® most closely resembles Daniel Lopatin’s Ecco Jams (2010) with its slowed, androgynous vocals and firm stance in uncanny valley, but it also recalls the best Vektroid material in how it liberally chops adult contemporary and library music and even pushes into house territory with “Climbing the Corporate Ladder.” This makes for a genuinely engaging listen, as the foundation holding Dream Sequins® together is constantly shifting. In “Rainforest Suite v1.3,” a percussive, jungle vibe gives way to a vintage Mr. Potato Head commercial, and the juxtaposition makes the latter oddly terrifying. Later, radio nonsense suddenly clicks brilliantly into a sparkling celebration of Avon that isn’t nearly as ironic as it sounds. Dream Sequins® deftly negotiates vaporwave’s tongue-in-cheek relationship to capitalism, skewering its machinations while isolating the idealism needed to make it run. When the Avon track finishes with a chorus of “Avon, you make me…smile!”, the artifice behind the sell is obvious, but damn if it isn’t a little bit appealing—how wonderful it would be if some mascara could solve my problems for five fucking minutes.

This is the trick that makes Dream Sequins® such a compelling record: it creates an atmosphere of a found-footage-dream-journey without sacrificing honest-to-god tunes, and ends up striking the perfect balance between being heady and intuitive. “Climbing the Corporate Ladder” and “ΛVΘN™ NiteMare Liquid Mascara” are genuinely hypnotic tracks that make capitalist devilry deliciously seductive: you dance to them while simultaneously contemplating your part in the corporate machine. Dream Sequins® actively works to hypnotize you, even going so far as to kick off with a “You find yourself getting tired” bit at the beginning, and then indulging you in media familiar, comforting, and hip. However, when these media are stripped of context the things that make them comforting become a bit gruesome, a bit sad. You love Mr. Potato Head because of a catchy jingle with a cute kid. Avon’s just the product of these impossibly friendly women who just talk mascara all day and probably never shit. It’s all idealism shown through a funhouse-mirror lens. And for it, Dream Sequins® is mesmerizing. It’s a perfect marriage of politics and music.

Vaporwave is a remarkable product of the 2010s in how hyper-accelerated and fervent its arc has been as a phenomenon; in the span of four years, it’s gone through explosion, backlash, death, and revival. Even more intriguing is the intensity of the genre’s gesticulation ostensibly taking place within an extremely miniscule faction of the internet (read: people who read Tiny Mix Tapes). Its politics have both been argued academically and dismissed as bullshit by artists within the genre. Saint Pepsi made dance music out of it and incited vitriolic comparisons to Skrillex. The line between being a sincere pastiche and a purely ironic gag is constantly tread by an internet fan base that I’d wager has ceased to tell the difference between the two. So when Nmesh ends Dream Sequins® with a chop-up of Anthony Fantano tripping over himself trying to make sense of Floral Shoppe, it’s both the funniest thing and an oddly perfect summation of where vaporwave is right now. It’s a joke for people in the know and a massive break in the fourth wall, yet it doesn’t really feel out of character for what the album’s trying to do. The world Dream Sequins® reflects is a little broken, a little weird, where nothing holds meaning for very long before being gobbled up by the postmodern condition and decontextualized as another piece of media to be mashed together with the next one. By mocking Fantano in this way, Nmesh illustrates how far Fantano and critics like him are behind this idea. Tough to blame them though; to succumb to the idea that one’s work is just another, tiny ping in the great din of the internet…that shit’s more than a little weird. It’s actively terrifying.