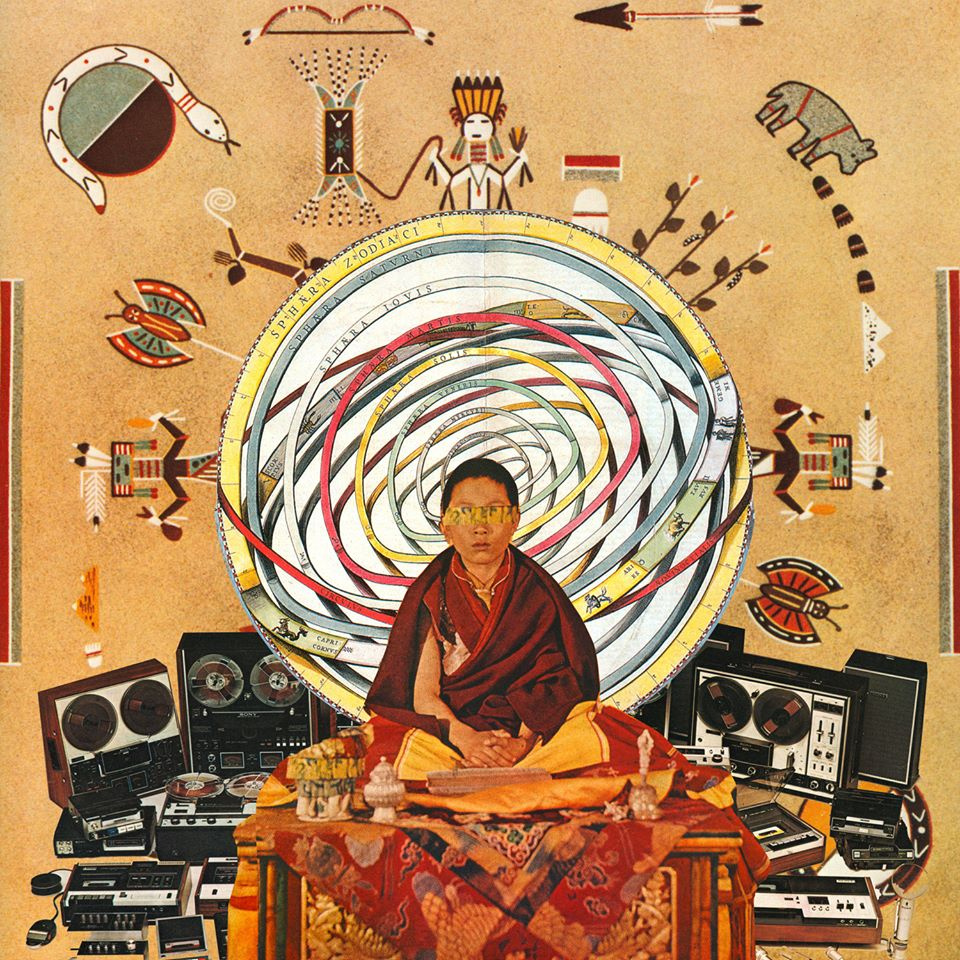 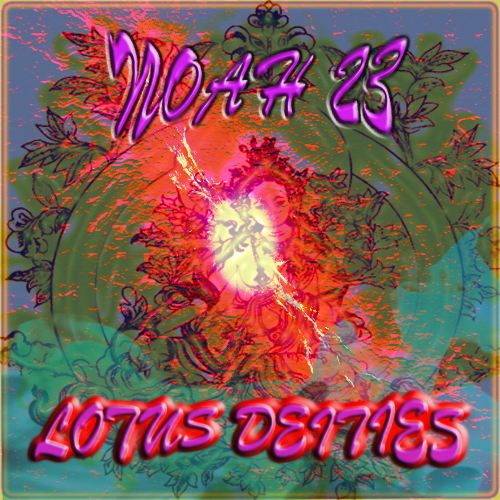 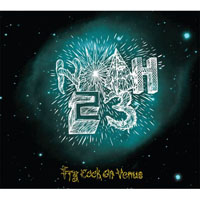 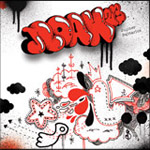 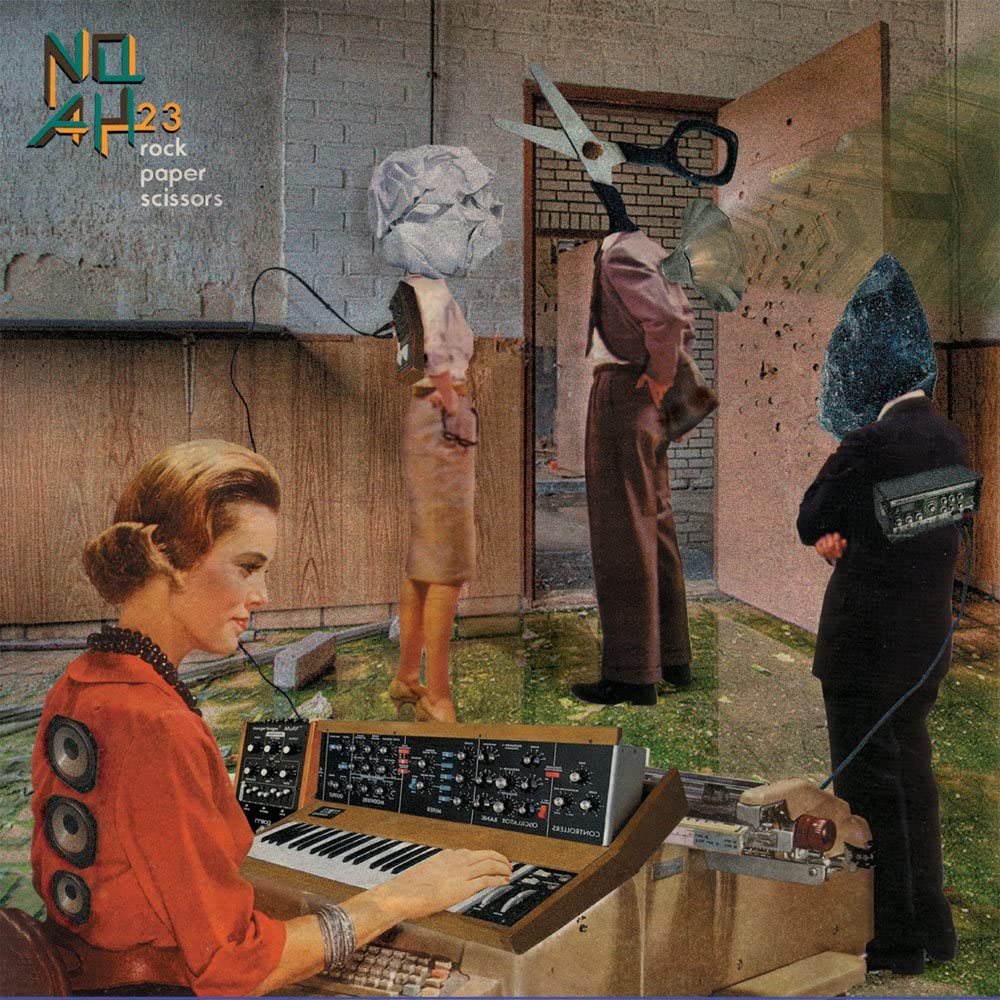 “Hail Mary, Hail Mary Mary Mary…” Guess the beat. Sunday I somehow found myself standing by the side of a road in Ohio with a rosary group in top zeal and passing cars honking. The blank hot yellow-white of the sun pasted to my shut eyelids, the recitation and the ambient noise began to bleed holy blood into each other. “Mary, full of grace” worming in through my ear like a mind-control slug and invoking the image of Catalina Sandino Moreno preparing to receive the cocaine Eucharist, I decided to take a mental stab at the immaculate conception; mind sufficiently boggled and shamed, I found the sound of car’s tires as divine as the prayer. One car stopped; my consciousness latched on to the bilious music oozing from its speakers; I congealed its fluids and heard, of course, “A Milli.” The rosary fell neatly on top. In the right state of mind even Catholicism can sound like a freestyle.

This anecdote essentially illustrates the point of Rock Paper Scissors, Noah23’s current foray into the highs and lows of pseudo-cerebral word processing, if you want to call it a “point.” Maybe more like a “speck,” or, “a speck of dust on a speck of a dust in a little swirl in like a larger swirl that’s just one little speck in like a fucking huge, gigantic ocean” as the cleverly sped-up voicemail that closes out this record might suggest. To dot my i and cross my t’s so as not to spell “llls”: the universe is endlessly big and complicated even down to the micro-fraction that we perceive of it—to cope it is subjectively rendered simple, visceral, and unequivocal. The slightest prod at the borders of that blind security touches a deep blue-black of ambiguity and doubt; and in that transgression language becomes the communicant of things that aren’t meant to be understood, becomes a conveyor belt of emotion and concept with no framework but the movement. Kubrick and Tarkovsky made some movies out of this same shit, but where those technical giants were struck and striking with wonder and awe, Noah’s a technical prankster caught on tape chortling. Never before have I encountered a rapper whose whole swag is to make fun of you, himself, and everything else for being infinitesimal.

As his most pop record Rock Paper Scissors might not be the best example, except don’t call it his most “pop,” call it his most “everything” record with a guest list featuring Cadence Weapon, Epic, K-the-I, Gregory Pepper, Delectable, Demune, Wormhole, Athena, Ceschi, Josh Martinez, a Cokemachineglow writer, and the other half of Canada, too. This is still “pop,” though, in the sense that there are hooks and melodies galore with giddy mistakes framed and validated by sublime moments. But it’s not pop in its multifarious density. That there’s 23 tracks seems inevitable, Noah the conspiracy believer and ultimate rap purveyor of arbitrary order. Textually, word is bond. As the album phase-shifts between alternate realities of classic hip-hop (“True Romance”), free association (“Gothic Cathedral”), French rap (“Ils Persistent”), the Jim Guthrie-esque (“Torn Again,” featuring Jim Guthrie), and, like, fucking “Steal My Sunshine” (“Moon Landing”), Noah’s unique persona remains the only constant. He is a wide-eyed, wide-mouthed non-prophet. His robe is made of poems he didn’t mean to write.

Noah’s preserved his earlier self, the child eager to digest the world’s open and neverending book, and gives that self the thumbs up while the poor kid gapes back at what it’s become, a maniacal Salviacolyte overwhelmed by the immensity of “other.” Near the end of a torrential interview with Ugsmag Noah talks about his belief that the world will end in 2012 but when pushed as to what he’ll say if nothing happens in 2012 he laughs and says, “Nothing will happen; to me 2012 is an idea,” and then goes on chuckling as he talks about the “Black Phoenix of antimatter rising from the depths of this crumbling, archaic history.” And that’s the difference between what Noah does and what Sole and K-the-I do in their earnest slam poetry verses on “Tragic Comedy” (for which Thur Deephrey’s beat sounds like the new Portishead record should’ve sounded): Noah’s grinning while his peers are straight-lipped or snarling.

Truthfully, 2002’s Quicksand was and is the peak of dude’s insane genius, a dark whirlpool cloud-encircled pinnacle of nerd rap that pushes abstract to the end of its line and then off the edge into snerking dementia. Which was incredibly fresh if not exactly heart-warming. And I can quote you any number of indelible lines (“check the junglelistic jibber-jah”) from that aughty classic but the only one that rings with clarity would probably be “I’ve done acid three times in the last two weeks / So you might say, I’m on top of my game.”

Noah’s new method of destroying coherence isn’t just intersong, it’s inter-Album. It’s Interzone. Opener “Hungry” is about how Noah is the rap adjective “hungry” but then blows up the slang definition into absurdity, concluding that he’s “Bill Burroughs on the breaks.” Throughout the record Noah plays more than ever with hip-hop and pop cliches, reveling in the devaluation of meaning by vomiting up conventional lyrical constructs and exposing how they bear little more import than when he talks about golden horseshoes or “kissing the blistering winds of Dirty South.” The ratio of songs that make sense to songs that don’t is higher than ever for Noah—50:50, which is damn high when before it was 0:100. But how much sense do those songs really make in context? This here’s a world where the surly girl-baiting of “Half-Drunk” is sandwiched between the chiming aphorisms of “Pinball” (“Life is like a pinball game / Your money just goes down the drain / It’s fun, I guess I can’t complain”) and the meth-trip escapades of “Crystal Palace,” where it sounds like Lord Kufu found the arcade with the pinball game and rigged a Galaga machine to chop and squeeze an old-school Yeezy sample. And then “Wisdom Teeth” delivers the incarnation of Hold Steady circa 2046, where a senile Craig Finn fronts a band of even more senile robots. The first verse of “Olfactory Memorial” recalls childhood memories and the second posits synchronicity-based time theories intercut with terse statements like “in kindergarten I tied my shoelaces together and the fire alarm went” and “I listen to the Fat Boys.”

Beyond the stark contrast of styles and semi-sense with nonsense, however, are the moments of clarity that occur throughout the record; these are startling and carry a poignant weight that has no real precedent in Noah’s discography except for some choice lines from “Petit Mort” off 2004’s Jupiter Sajitarius. Half-opaque though it is, “Olfactory Memorial” throws out a few vagaries that bolster closer “Fame” into something really interesting—synchronicity means man’s one shining moment, that “fifteen minutes of fame” that everyone gets, could also function as actualization if only realized as such. It doesn’t hurt that Noah actually does sound actualized as shit over Madadam’s gleaming, lucid dream beat, moving seamlessly from grandiose afterlife imagery to a smug summation: “And I’m silent in breath / And calm as the night / I’m so fly, I’m so fresh / I’m so bomb on the mic.” Judgment Day doesn’t matter, the earth transformed into a ball of confusion that “is music to all.” And then Noah says death (“the gun in your hand”) “ain’t nothing but peace.” But he still acknowledges the tragedies inherent to a finite mind. The album’s undeniable centerpiece is “Faded,” Daniel Johnston sample (“your picture is still on my wall”) and sparkling synths setting the stage for a doomed battle against merciless Time, Noah unleashing a slew of gut-punch lines that climax with “I never would have thought that I never would have thought about a lot of things I thought that I never would’ve forgot.” With the second verse producer Ceschi doesn’t quite match Noah’s effort, but that’s okay, your soul’s already been sweetly crushed. These clarion themes serve to throw a slivered shaft of light down on the swirling morass that surrounds them.

Rock Paper Scissors reaches this new plateau for its struggling auteur simply because its goals feel more defined even if those goals are mostly the almost Taoist goal of expressing that goals are futile. That we’re all just playing the fun, wasteful, dangerous games talked about on “Pinball” or “Black Ball” or “Toy Story” (“turn your Jenga into 9/11”) and those games are microcosms of the music of the spheres. That human language is another such microcosm and Noah’s chosen plaything; as a carrier of information in the Age of TMI, language becomes a channel by which Noah funnels data overload into sheer momentum. The texture is captivating, pores and ripples on an undulating rush of syntax and embryonic hooks. With big help from Staplemouth “Dead End Game” begins as a barrage of anxious apocalyptic messages until it blurs into pure form, into anti-message, until the apocalypse becomes just another sick flow over an ill beat. In his continued quest to exploit the ephemeral, touch the infinite (inappropriately), and create a new application for criticspeak’s “universal” while dolling up weirdo hip-hop as radio pop, Noah23 grabs at numerous disparate ambitions at once—in gross artistic excess—and then ends on a wise grace note, letting everything slip through his fingers like sand while spitting the eulogy: “Same difference.” The entire manifesto is a Tower of Babel that falls and rebuilds itself in an accelerating cycle until eventually it’s rising and falling at the same time.

Want to know the real reason that paper beats rock? You can write on paper. Noah realizes that, even if everything is chaos or unknowable or magnanimously nothing, language is an act of creation. This is how God created, after all. And what kind of game is rock paper scissors, anyways? Arbitrary words and symbols used to make trifle decisions, to establish and abolish hierarchies with a simple three count. As a title it’s the most meaningfully meaningless in Noah’s oeuvre, apt since it names his most meaninglessly meaningful album. This philosophy has always been true of Noah’s work, perhaps even more true, if that makes sense (which I hope it doesn’t). But by spreading himself thin with this record’s eclecticism and hedged bets at success, Noah as an aesthetic entity becomes a little more transparent, giving us a glimpse at the cogs beneath. With this hint of a nudge Noah opens up the Pandora’s Box on his conceptual wasteland, inviting you to have a peep at the risk of losing your mind. He’s already on the other side, laughing and rolling dice. Here metaphor is the naked emperor, simultaneously revered and ridiculed. Words become quantum packets of light, inscrutable yet brilliant and ordered according to what feels like some unquestionable, instinctive law. Rhythm is just a parody of melody. A parrot of melody. Breath is steam. Thought is a stream. Shit flows like a riptide. Slip ‘n slide. Splits the house like apartment apartheid. So: