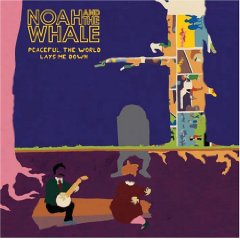 Noah and the Whale

Peaceful, The World Lays Me Down

So Peaceful, The World Lays Me Down commences with a dancing acoustic guitar and some handclaps, which give way to a hurried Charlie Fink (lead singer, not the greeting card dude) reciting in a beautifully arid tone: “Last night I dreamt we were inseparably entwined / One piece of rope made out of two pieces of vine,” and you know where this is headed. Fink protests 30 seconds later “I’m not trying to write a love song,” but he’s full of shit. This is— as you’d expect it to be—a folksy incarnation of the Magnetic Fields, sweet in its sincerity, sardonic in its undertones. Much like the Dodos earlier this year, Fink and his comrades craft a record culled from the well-worn themes and spare parts of other acts within the “indie” sphere, constructing a pleasantly familiar room adorned with photographs of Robert Smith and a Will Oldham record playing quietly in the corner. But such familiarity (derivativeness, in harsher language) presents the obstacles Noah and the Whale face: while a term like “derivative” can be softened with “good, though,” there seems a certain ceiling for an album that recalls so many obvious touchstones.

Which is a shame, really, because Charlie Fink’s vocals are sublime—deep and hopeful in the most inarticulate, wonderful way. They overwhelm his occasional songwriting gaffes, propelling them into some arena of ambiguity. The penultimate track “Mary” is a music box waltz featuring a handful of lines that would, in the context of weaker tenors, seem trite and overly sentimental (“She tried to kiss me and I said don’t bother / You know we don’t really love one another”), but Fink delivers it stonefaced with an assuredness that makes it my favorite song in a slew of pretty good ones. Still embarrassing to play in company, though.

All of this is embarrassing. Like, caught-masturbating-in-front-of-a-pretty-girl embarrassing. It’s sort of how if Seth Rogen poses nude, it’s funny; if Ethan Hawke bears himself, it’s sexy and provocative; if Corey Feldman shows himself off, it’s unintentionally funny because you know he thinks he’s being sexy, but he’s really just a schmuck. Charlie Fink does the same thing, exposing himself in full, and it’s rather indiscernible as to which category he belongs. I mean, there has to be an element of self-awareness when Fink describes the vacuousness of his heart in detail; some humor intended in such brazen vulnerability. But Fink straps his cards to his vacant chest with three layers of duct tape, leaving us to our own interpretations.

Regardless, this is a fine collection of maudlin love songs, tender couplets wedged between steady strumming, spare percussion, and some lovely fiddle sections. While I’ve made a lot of Fink’s vocals, the arrangements that house his musings aid in the construction of an antiquated, worn-in sound. Peaceful, The World Lays Me Down really does invoke visions of quaint Adirondack cabins in its simplicity and, yes, in the mahogany-rich tones of Fink. It’s an unremarkable record upon initial inspection, but the key here is immersion (headphones and candles help), and if allowed to buy into Noah And The Whale’s mirthless, pretty document, one can discover some resonantly brilliant moments. There is a juncture in “Give A Little Love” when the piano steps down a few octaves, and Fink pushes his sincerity to its breaking point, his voice so thick it nearly solidifies, reassuring, “Let my love surround you like an ether / In everything that you do.” In this moment all pre-qualifications are discarded, all forebears rendered irrelevant, and all oxygen removed from the listener’s lungs. It is a palpably beautiful moment, one that begs to be relived repeatedly. Perhaps most important, it is bereft of ambiguity, something heart-breakingly explicit, quietly indicating the purpose of this sad, little mess of a record.

Not that it eradicates all doubt: doubt that at least some of this isn’t tongue-in-cheek, doubt that something this sappy can possibly be this good. But I’m as positive as possible that Noah and the Whale’s debut really is good and that there’s enough potential here to create something positively electric, as either Fink’s questionably present humor expands itself or he crafts more Darnielle-esque metaphors as glee-inducing as likening his love to an ether. Earnestness is so damningly difficult to nail down, but Fink and his cohorts come as close as anything this year, displaying an aptness for cloying love songs minus the puppy dog eyes.