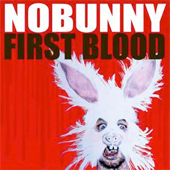 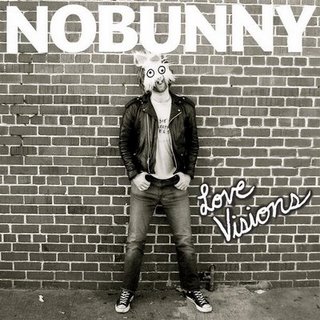 So that sleeve’s calling for attention. You’ve seen it all before, right?

Not to ignore how the joke is wrapped up in a gay old bunny mask and left to frighten the hell out of anyone who popped in this place just to lounge. Because, yeah, dude is in a costume and is filching The Ramones (1976) and is pretty sourly thumbing it to Jay Reatard, who probably, y’know, is a whole lotta angry anyway. Nobunny’s about the love; live, he gets naked. Naked is how a lot of people nowadays live. (I mean, sure, who cares, why not.) Nobunny is also not a real person, just like Ziggy Stardust never existed, and his record has probably sold nothing as it continues to be hard to find in any material form.

But the songs themselves—freak not, these are songs—are great. Flipping, jaunty, beery things. Anthems with true heart and overdriven spirit. Handstand music: Love Visions is just what its title suggests. It’s one guy cartwheeling through punk rock, as much in thrall with the noise he’s making as whatever ideal he’s tuning towards. Love being, of course, that broad subject and occasional retreat for all kinds of nonsense and excuse. Visions being visions. Which, if we make a few reasonable assumptions about the value of retro-rock in a climate that increasingly values retro-rock for its new tradition, as opposed to the forward-thinking elan that might (who knows) actually get us somewhere, could get one to believe that a record like this would get boring fast. No one wants to hear another rock album, I hear you. Few people just want to hear some doof wax about Love.

Thankfully, this is an album played straight. It has the kinda of-itself purity that punk hawks spend whole lives totalling; something true and genuine and which, as keys crash into “Nobunny Loves You,” feels rigorous and elementally inflexible. Call it power-of-pop, I’ll call it fucking irresistible. Love Visions makes fast with the hooks and comes on with the cheery know-all of a perfect genre exercise. It’s a rock’n’roll boner; it’s scuzz with a point; it’s coruscating on some heavy shit. It’s like 20 minutes long. The shortest track is called “Don’t Know, Don’t Care.” You get the idea.

This Nobunny guy probably understands what people want to hear when they want to hear simple songs about love. So when “Not That Good” opens with maybe the sharpest lines of last year (“Called you up on the telephone / You were last on my list but at least you were home”) it’s to say, more or less—hey there, it’s ok, I get how you’re feeling, k. By the time the last chorus is blurted, and the buzz of the guitars have smacked out, there’s little but the need to play the whole thing again. Same goes for “Tina Goes to Work,” the claptrap “Church Mouse,” “I Am A Girlfriend,” basically every track here.

And in “Chuck Berry Holiday,” the record’s most open invocation, Nobunny grovels up a paean to neediness that’s gonna suit enough people fine. The crazed catch in his voice is what lends the track its heart; like the rest of Love Visions, there’s the sense of therapy and the sense of regret, as if these songs have been tucked away to gather resonance for years. So, only now, given the appropriate maturity and hindsight, can this guy rip into it all with the balls-out affection that this material calls for. Like someone fallen on hard times handed a retrospective on how to get a break; Nobunny crashes this record, caterwauls, cracks, and treats everything in general with an estimation and love that moves past the ramshackle and fashionably amateur. There’s an honesty here that can’t be faked.

Love Visions works because of that honesty. It openly engages the listener into not giving a toss about time, place or context for as long as it lasts. I think that’s special. The drum machine’s pretty sick, too.