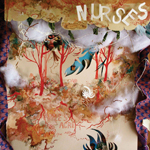 For all the talk of contemporary disengagement from music—you know: how our MP3s lack the grounding context of a physical record, because no longer do we give a shit about album art, lyric booklets, etc.—it sure is easy to get hung up on the little details. I suppose it’s intuitive. With costless dissemination glutting harddrives, flippant dismissal is simply a byproduct of efficient listening. How can one be expected to wade through the shit (of which there is, frankly, so much) if the shit cannot be identified, labeled, and vilified for its most superficial markers? I understand this process. I participate in it. I skim press releases for phrases like “genre-blurring” or “textural sound”; I scoff when bands write “nobody” in their Sounds Like column on Myspace; I have, and will again, make fun of Dan Deacon’s beard. There is no shame in that.

Yet the process, however advantageous, yields unfortunate casualties. Disregard for Nurses would be one such error. Nurses seem unfortunately destined for neglect by any music fan who has little tolerance for sandal-clad hippies with big beards and woodblocks. I generally consider myself such a person, in fact, though it’s true that I’m able to look past Akron/Family’s moldy ponchos and Devendra Banhart’s…well, Devandra Banhart himself. And like Banhart, Nurses must contend with the reality that people will be aware of press photos, anecdotal blurbs, and all the other vague review-ready detritus that goes along with idiosyncrasy. Nurses will be pigeonholed as freak-folk, but that is misleading and a disservice. Apple’s Acres is decidedly shambolic, but any identifiable traces of traditional folk rock are employed in service of something richer, warmer, and grand.

It may be that Nurses are simply too ambitious to be confined to the narrow parameters of freak-folk. It’s apparent from opener “Technicolor” that sparsity is only a misdirect: like Grizzly Bear, with whom they have a lot in common, Nurses’ feigned frailty lends eventual climaxes a kind of understated weight. Their asceticism gives an impression of the band as fairly unassuming, when in fact Apple’s Acre tends toward just the opposite: their attention to detail, brought into stark relief against a whitewashed background of folky minimalism, is refreshingly striking. This is a bedroom project, and it certainly feels like it, but lacking the physical means to match the apparent grandiosity of their vision has forced Nurses to simply make the most of what they’ve got. Necessarily restricted and restrained, their extravagances never feel excessive or indulgent.

Despite lead vocalist Aaron Chapman’s Mangum-y warble, Apple’s Acre is largely characterized by bright, breezy effervescence. “Caterpillar Playground,” built around an infectious if slightly precious whistle hook, charms without dipping into sentimentality; the title track’s cascading piano is jovial and spry; and “Bright Ideas” capitalizes on the propulsive folk-rock bravado that made “Fools” such a hit for the Dodos last summer. But it’s on lead single “Manatarms,” when John Bowers and James Mitchell join in for vocal harmonies, where Nurses really shine. “Manatarms” seems at first like an underdeveloped “Brothersport,” but its relative austerity gives nurses take on the convention the means to smartly sidestep Animal Collective’s jam-band digression. Stripped down and gutted of excess, Nurses’ trips through Merriweather Post Pavilion territory present familiar forms and tropes with atypical clarity.

These are indeed lean, frugal, and unforgiving times. There’s too much damn music, and quick dismissal seems the only reasonable course of action. We don’t have tolerance for the extravagant or the effete, nothing precious or pretentious, only sensible artists with sensible facial hair. And so Nurses are an indulgence few can afford. This is not the carefree Clinton era, nor the smarmy times of Bush Jr.—we’re smack dab in “Yes We Can” county, getting through a rough time together, and Nurses are a psychedelic freak-folk trio from Portland with ridiculous facial hair. But Apple’s Acre is also very, very good. Make an exception, just this once, for the hippies.