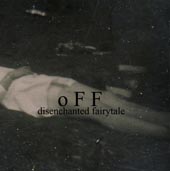 Accustomed to EPs being attractively brief, I’ve sampled this, the teensie-tiniest of EPs of supposed allegiance to Clan Destine Records, that place where that thing called “witch house” roams free. Just a hair over seven minutes, o F F’s Disenchanted Fairytale consists of four tracks total, the longest of which: a waif-ish two minutes and twenty seconds even. Like one of those painfully petite, bony people walking down the street, where I—in no hyperbolic way—wonder where they are storing their organs, this EP contains in its wick-thin frame a surprising lot of meaty, soulful R&B innards. With languorous, drenched beats and rich vocals, it ceases to feel anywhere near as anorexic as its track lengths, hazy black-and-white album art, and witch house descriptor would lead me to presume.

As measly as the EP length itself, measlier is any info one can gather on the band. o F F is Simon Guzylack, who also DJs as Gay Mormon Kissing Club and curates exhibits at CocoRosie’s art space, Mad Vicky’s Tea Gallery in Paris. Seemingly bent on obscurity, Disenchanted Fairytale is doled out by ClanDestine in a limited 50 cassettes. Meanwhile, the digital EP, fortunately, is available for purchase via Recorder’s bandcamp). That’s about it. Godspeed in Googling that shit.

“1995” opens the EP with slightly sloppy, wet drops of light, pathos-building piano chords, and equally wispy, equally echo-y vocals that seem to hit their expiration date over and over. These bits begin to turn into ponderous off-color tones, hitting a sudden disharmony. The EP’s airiness then turns on a dime toward deeply sultry, androgynous lows with rounded, indolent tones on “slowdowndowndown” (appropriately enough). Think Tracy Chapman or Antony & the Johnsons with a sudden (and awesome) hipness to Auto-tune, and think about these artists amidst a roomful of more ambient-noise distortion and what sounds increasingly, through the following tracks, like the blurred electro-equivalent of a rainstick.

Moving into an unexpected shuffle-and-slide rhythm, “brokenpartstogether”’s bass reverberates deeply; it sounds like someone poking randomly at synthesizer keys while Auto-tuned vocals are brought ever-closer to their true dancefloor potential. For about a minute. A beautifully, gloomily concocted moment, it passes all too soon, dissipating into tissue-thin layers of echo. Most especially, it’s the track that leaves an appreciable sense of something left wanting.

Closing track “missthemway” bears the EP’s longest length and its darkest vocals yet. Reaching the absolute bottom of the baritone range, the voices are almost too lush to function beneath the contrastingly weightless claps of rhythm. A touching use of piano, as in the opening track, surfaces. In this final instance, fleshing the song out with a calming mid-tone and reassuring backbone—instead of returning to the heartstring-yanking notes of yearning on which the album began—carries Fairytale to a comfortable (if a little morose) retire.

While the heart wants a follow-up to extend and finish what the previous songs got started, the EP is a unique experience and a uniquely filling addition to my undernourished concept of witch house. If you’ve been seeking a taste of what ClanD estine’s got brewing, Disenchanted Fairytale is both one of the daintiest of tonguings and, however petite, a simultaneous stick-to-your-ribs, sumptuous sampler platter of the label’s more soulful side. And if you’re just looking to Auto-tune the witch house, well, it pretty much satiates that, too.