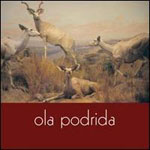 The songs of Ola Podrida are almost weightless. Like a falling leaf in autumn or Forrest Gump's gust-dizzied feather, this music is breeze-blown and paper-light. The band's self-titled debut eases down the road Will Oldham once sang of, smooth and ambling. Across much of the band's self-titled debut, the only hint of earth is singer/songwriter David Wingo's voice. More cracked and rough-hewn than Iron & Wine's Sam Beam, when Wingo eases into similar, breathy falsettos, it's with world-weariness rather than Beam's usual insistence. For the most part, Wingo is content to lay back, his singing in the center of soft-focus songs blanketed in shakers and double-tracked acoustic guitars playing well-worn chord progressions.

Wingo is a film composer with a few movies under his belt (including director David Jordan Green's All The Real Girls and this year's Snow Angels), so it's no surprise that he's able to capture an aesthetic on his debut under the Podrida moniker. The album starts with the fantastically pretty one-two punch of "The New Science" and "Jordanna," both of which betray another similarity to Beam in their guitar work. The lead guitars of each song pick out a lick and sit on it, a good trick that, without getting too repetitive, pulls you into the songs' hypnosis. These are among the most distinctively melodic tracks on the record; for the most part, this is a quiet, gentle folk album that fails to call particular attention to its songwriting, but Wingo's mastery of the sound is hard to deny.

Electric guitars and cymbal crashes attempt to rain fire down on "Cindy," about a third of the way into the album, but the rough chords barely sear through a mix that keeps Wingo's voice on top. Curiously, "Photo Booth" (not a Death Cab cover) double-tracks him and hard-pans to either side; it's an old singer/songwriter trick but one that, coming unexpectedly, ends up distracting from an otherwise pleasant song. He returns to the middle on "Run Off the Road," and the album slips into comfort again. To be fair, there's variation beyond that. The more upbeat "Lost and Found" concludes in Byrds territory, and the solo piano "Pour Me Another" bears a striking resemblance to the Cat Power classic "Colors and the Kids." If you can wake them from the sleepy instrumentation, the lyrics are there: "You wake me up, still dark outside / Something about an open door / something about cold feet / think you're asking me to turn up the heat" adds a current of worry to the otherwise tender "Photo Booth" with its double entendre.

Even so, these are songs for summer afternoons, for lemonade and nostalgia. Podrida's take on relatively lush, shaker-egg folk is the same as Mojave 3's -- warm, pleasant and indistinctive. But this is the album's greatest strength: it captures a mood and genre and, goals accomplished, sits back and enjoys the ride. These may be songs you'll swear you've heard before, but they're not worse off for it. "I don't know if there's a point to it all, but I sure loved hearing your voice," Wingo sings on "Jordanna," and he's half-right.