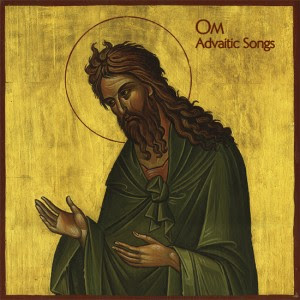 It would be a pretty easy introduction to Om’s newest LP, Advaitic Songs, to say that it has no problem inducing a mood that’s typically dependent on chemical intervention. Granted, that’s a pretty easy way to introduce any of the material released by former Sleep rhythm section-ists Al Cisneros and Chris Hakius between that band’s dissolution and Om’s last, most repentant paean, God Is Good (2009). But I feel like I’d be doing these dudes a pretty grievous disservice to simply leave it at that, because Advaitic Songs is a monolithic, confident binding-together of all of the sacred pages the group has piled up thus far into a holy mountain of post-stoner gospel manuscripts. Setting off on a crusade down the dusty pilgrim’s pathways of Advaitic Songs, which were first truly embraced on God Is Good, Cisneros and his disciples (which for live purposes and to my ultimate satisfaction now include Chicago experimental stalwart Robert A. A. Lowe of the 90 Day Men and Lichens) seem to have been sincerely touched by spirits that once only stood in as cartoonish imagery and—as Al sneers a little self-deprecatingly these days—simple “pot trappings.”

Don’t get me wrong: I’m as instinctively attracted to the phrase “pot trappings” as any liberal white kid who survived high school in a small town, and I love Sleep, maybe more than I’m supposed to. But Advaitic Songs seems in every way to mark the point where even Cisneros himself realizes that Om has finally emerged from under the shadow of its own stoner legacy, revealed rather gloriously as a horse of a completely different color, creed, and context. Al has respect for both facets of his own creative identity and here his struggle with drawing that dividing line seems to have come to a graceful close. Playing no small part is newcomer drummer Emil Amos, of Portland’s like-minded ethereal headbangers Grails (to say the least of Amos’s prestigious history), and if the fan-buzz surrounding Advaitic Songs is of any telling appraisal, this is the record that’s earned Amos the title of accepted alumnus. In one particular fan forum, I heard Amos’ enrapturing, funereal pounding very accurately described as “the sound of someone hammering the nails into your coffin.”

To use that description to touch more generally on one of the most distinguishing aspects of Advaitic Songs: the visceral effectiveness of Amos’s ritual death-march is almost never dependent on volume. So it is with the record as a whole, which proves again and again how Om are consistently some of the most trustworthy candidates for making something meaningful out of the cliché reduction that heaviness isn’t really about volume or nihilistic detachment. Half of the record is fucking classical strings, for Christ’s sake. But I’d be hard pressed to find a single string arrangement here that doesn’t also read perfectly in my mind as blissfully heavier-than-thou riffing more than true to the fuzzed-out stoner pedigree floating overhead. Hell, even the most old-fashioned bass-n-drums face-melter on the record, “State of Non-Return,” is ultimately a perfect, linear demonstration of how to transform Sabbath into Schubert. I had to play it through a few times just to believe how well the two sides of the song work together without even acknowledging the sordid underworld where less considerate string arrangements are most often shoehorned into the context of metal.

The female chant that opens the record on “Addis” immediately gives me the early-morning stares and doesn’t let that one spot on my wall get any less interesting for about six solid minutes. In only the opening moments of its droning note and the rising chorus of a traditional Arabic chant, “Sinai,” as grandly as any of Sleep’s epic processions, conjures the image of a Hashshashin army cascading violently through the golden gates of some glowing afterlife. The gut-rumbling cellos that twine around “Haqq al-Yaqin” are actually playing the exact tune that Pontius Pilate had on his iPod headphones when Jesus walked to Calvary. This I’m fucking sure of.

In the end, Advaitic Songs is simultaneously an invigorating challenge to the pervasive ignorance about metal’s “authenticity”—an exciting, active debate that’s been making metal wonderfully inviting territory for newcomers in the last few years—and a moving sacrifice to the obvious, timeless truths about metal’s rooting in many totally uncool traditions, like classical and sacred music. A refined sense of composition and palette saturates and expands the depth and clarity of Om’s visions, but also finds them considerate of what is necessary at every moment so as not to sacrifice the uniquely minimal sense of heaviness for which the band’s known. It seems worth mentioning that it’s not so much an expansion, which would seem to betray Om’s characteristic sense of meditation, as it is a honing of everything the band has been evangelizing, particularly since things got downright jeezy-creezy on God Is Good.

Advaitic Songs makes it endlessly clear to me how much more good came from Al’s time in the holy land than 2008’s great Live in Jerusalem. The guy we started worshipping way back when, our wake-n-baked Marty McFly silhouetted in mid-headbang before a glowing green altar of amplifier death, has emerged from some acetic headtrip as the rightful Moses of metal, and I’m more than obliged to see where the exodus leads. Om certainly absorb religious images from every corner of the Old World with a certain reckless abandon, but despite a wandering path that would find most lost in appropriative disrespect, it all seems to melt effortlessly together into the band’s unique tapestry of the void. Simply wandering pilgrims in an ancient cosmopolitan land where spiritual traditions war and merge like sand in the wind, Om sing summoning songs to tell their own story. Here’s hoping it keeps getting better—but just in case, here’s also more than kinda hoping that Advaitic Songs ends up being the soundtrack to the apocalypse.