1. Atabat (a style of sung folk poetry)
2. Lansob Sherek (I Will Make A Trap)
3. Shift Al Mani (I Saw Her)
4. La Sidounak Sayyada (I’ll Prevent The Hunters From Hunting You)
5. Jamila (Beautiful Woman)
6. Qalub An Naas (People’s Hearts)
7. Laqtuf Ward Min Khaddak (I Will Pick A Flower From Your Cheek)
8. Kaset Hanzal (Drinking From The Glass Of Bitterness) 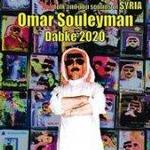 Dabke, a popular music and dance style in the Middle East, means “stomping of the feet” in Arabic. Taking its name from a time-honored technique used to compact dirt while building a house, dabke‘s fantastical keyboard lines, swooping string arrangements, and bombastic beats serve as the soundtrack for impressive group dances at joyous parties and weddings. The eight tracks on Omar Souleyman’s Dabke 2020 (Folk and Pop Sounds of Syria), released to coincide with a recent European tour, are frantic and scrappy compared to mainstream dabke hits. Even Souleyman’s own 2004 chart-topper “Khataba” boasts of significantly glossier production values. But for their low-budget feel, the songs here stomp that much harder.

Omar Souleyman, one of Syria’s most famous singers, exudes coolness and mystery, always appearing in his trademark getup: black mustache, red-and-white checked kaffiyeh, dark sunglasses. (Adding to the mystique, Mahmoud Harbi, who writes much of Souleyman’s lovelorn verses, is said to often stand next to him during performances and whisper poetry into his ear.) Very little is known about Souleyman in Europe and North America, and much of what we do know has been probably culled solely from Sublime Frequencies’ press releases and the interesting liner notes of Highway to Hassake, a fantastic compilation of some of Souleyman’s hits put together by Mark Gergis and released in 2007. A geek like me will scoff at the 46-word blurb on the info sheet that comes in Dabke 2020‘s cardboard packaging, but all curious English speakers need to know is that Souleyman and his band throw down some of the fastest, most ass-kicking party music that side of the Mediterranean Sea.

While overblown house tracks by the likes of Bad Boy Bill are perhaps the closest American analogue to the explosively romantic dabke produced in Beirut, the tunes compiled on Dabke 2020—which were previously released in Syria on cassette tapes over the years since 1999—is more comparable to the oppressive hardcore techno of R&S Records. The compilation opens with ominous buzuk noodling and roughly hewn crooning on “Atabat,” which segues seamlessly into a brutal six-minute keyboard jam, “Lansob Sherek (I Will Make A Trap),” that features the relentless popping of an Iraqi zenbur drum. “La Sidounak Sayyada (I’ll Prevent The Hunters From Hunting You),” with a wheezing, stop-and-go keyboard motif set over a four-to-the-floor stomp, has the feel of one of Paul Elstak’s fun-loving gabber tracks. On the other hand, “Kaset Hanzal (Drinking From The Glass Of Bitterness)” closes the CD on a meditative groove driven by a repeating piano arpeggio. Barely clocking in at 40 minutes, the eight tunes mostly follow the same pattern—over driving beats on drum machines and hand drums, Souleyman answers phase-shifted keyboard lines and mesmerizing riffs on traditional stringed instruments with raspy verses and hyping exultations. As one might expect, this makes for great party fodder.

Dabke 2020 is a skimpy release, especially considering that Souleyman is said to have released upwards of 500 cassette tapes of live and studio recordings in his home country since 1994. Those who haven’t heard Souleyman before are better off starting with Highway to Hassake, but the serious fans won’t want to miss this. If the two Sublime Frequencies compilations just aren’t enough, however, the local Middle Eastern store might have some great cassettes for sale. Simply mention Souleyman’s outfit and the clerk will know who you’re talking about.