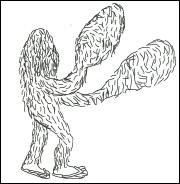 If Dntel and Mouse on Mars could, uh, electronically copulate, chances are the result would sound something like the awkwardly named Ommm. Which means that, yeah, Testing the Equipment is excellent.

There's a kind of deceptive innocence to Ommm. Its adorable four-track samples and sweet synthetic tones would have you believe it's a cute little project made out of a sunny day and lots of weed. But then it becomes increasingly apparent that there are many layers, hidden tones, and entirely superb programming at work to meld the glitches, swoons, and often fantastic beatmaking that Edmund Davie carefully selects for each one of the album's pieces. For every "cute" Nintendo sound that makes an appearance on Testing the Equipment Davie slips in twice as many beat knicknacks and tonal modulations. Sometimes the fruition of his efforts are more brief experiments than fully fleshed out suites, but they serve as apt transitions and breaks from his sometimes hysterical energy and verve.

Take "IMAX," which gushes rapid fire beats to the tune of toy piano chords and squelching bleeps. If you listen just to the song's percussive patterns, you can unearth droves of manipulations, tweaking, and breakage that boggle the mind - and when you consider that it still manages a melody in the midst of all its pitter-patter, the song becomes triply impressive. The glut of bass beats that burst from "EMAC" undergird hyperactive repeating synth patterns that Davie periodically fucks with for the sake of progression and variation.

But beyond this kind of inventive glitch-ADD, Testing the Equipment demands attention for the breadth of Davie's sonic palette. Whereas an act like Mouse on Mars often falls prey to a stylistic pigeonhole, Davie comfortably embraces several threads of glitch (laptop, tonal, pop, beat-oriented, IDM) and weaves those threads into an exhilarating, emotionally variegated programming patchwork. The blithe opening synth play of "Cave Air Foci" (click to hear) gives way to pensive keyboard chords placed in somber space - until Davie gently, artfully brings back elements of its opening sunniness to layer the song with remarkable depth of feeling.

Davie throws in an off-color chord change in "Equiformal Clique" to warp its initial pleasant sounding synth yawns into an ominous light, further accentuating its not-quite-rightness small tonal discords. The song's minimalist bending and warping communicates angst and unease better than whole orchestras of whining minor chord strings. Davie does all this while effortlessly switching stylistic feet. Hot off the bouncing tail of the Mouse on Mars-ian "IMAX," he cools down with a tease of Fenneszian or Eluvium-type tonal experimentation on "All Day Template." He even goes Dntel-style on "Elementary Particles" without flinching, twisting delicate harmonies into disturbing murks of dissonance.

It's hard to pinpoint where this acuity of spatial and tonal judgment comes from, but one might speculate that it may have something to do with Davie's improvised noise-group background (he worked with madman Shigeru Ikeda, and "Good Weather" is a nod in that direction). Perhaps Davie wanted a break from overwhelming sound. Perhaps he wanted more space for his orchestration to breathe. Whatever the reason, the fact that Davie's first foray into electronic music is so good, and the fact that it can pull together so many fruitful directions, is reason to hope he stays with his current interests. If Davie's just testing the equipment now, who knows what kind of genius he'll come up with later.