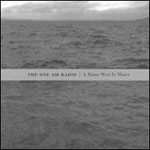 The One AM Radio: A Name Writ in Water 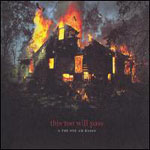 This Too Will Pass

Hrishikesh Hirway knows his aesthetic. The cover of This Too Will Pass, his third full-length as the One AM Radio, depicts a house on fire; the liner notes are filled with black-and-white photographs of silent, abandoned scenes. The album itself continues in much the same vein as 2004’s masterful A Name Writ in Water. It’s composed of carefully-positioned acoustic and electric guitars, upright bass, drums, horns, violins, electronic touches and finally, Hirway’s voice -- a tender instrument unto itself. The songs are atmospheric, subdued and exploratory, as likely to stick to a patient verse/chorus/verse structure as they are to transition a half-song into an instrumental passage. They are, inarguably, One AM Radio songs.

As writer, arranger, performer and recordist of the bulk of his music, Hirway has grown into a studio -- or at least a Pro Tools -- vet. The work’s paid off. The album has immaculate sonics; the dry, mostly non-reverberating style makes for a crisp headphones experience. The One AM Radio occupies a singular niche: not electronic-oriented enough to be paired with Four Tet or Caribou, but too sharp and tech-savvy to put next to Iron & Wine. The closest touchstones are the defunct, unacknowledged Sea Snakes and groups like Sub Pop’s Holopaw. But no one has made so much effort to carve out a sound: the soft, insistently strummed acoustic guitars, the gently lingering electric notes filtered through pedals, the swelling harmony vocals that appear most effectively on closer “Where I’m Headed,” all immediately identifiable One AM Radio trademarks. And, like Iron & Wine’s Sam Beam, Hirway’s voice is an iceberg -- whispery and slight initially, but a staggering power rests beneath the surface.

The album starts off in sinister fashion with “The Harvest,” evoking the airy chords of Espers and setting the mood for a solitary, often paranoid album. “You never told anyone!” Hirway’s falsetto accuses, the first in a number of broken promises and unsolved mysteries. “In The Time We’ve Got” swirls together ahh-ing vocal tracks between verses and unleashes a stomping drum set on what should be an anthemic chorus. It’s close, but one dazzling fill before settling into a rhythm would’ve made the song really take off. On second-half tracks “Your Name” and “Where I’m Headed,” Hirway nails it: “Your Name” shivers through two bleak acoustic minutes accompanied by mournful horns, while “Where I’m Headed” is a slow ballad made strange and contemplative by the electric aura surrounding its simple guitar-and-voice center.

A Name Writ in Water was a near masterpiece, and This Too Will Pass falls just short. “The Echoing Airports,” despite its lyrics of loss, sounds awkwardly saccharine; “Mercury” also breaks the mood with a major key melody. Nothing wrong with a little levity, but for a musician whose central motifs are autumn, running away and near-death experiences (“Cast Away” on this album and “Lucky” on Name, both powerful narratives of the sublime), it’s ill-fitting. Hirway works best in subtlety, but “Fires” opens dramatically with horns, voices and cymbal-riding drums crying impending doom.

“You’ve changed so much so fast,” Hirway sings on “Lest I Forget.” The One AM Radio has changed for both better and worse over the last few years, and the result is a strong album with some growing pains. Over the last half-decade, the songwriter has developed a fascinating, distinctive style. Now, let’s hope he’s here for the long haul.