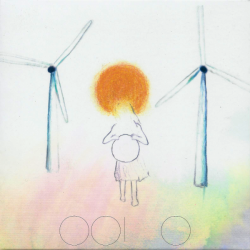 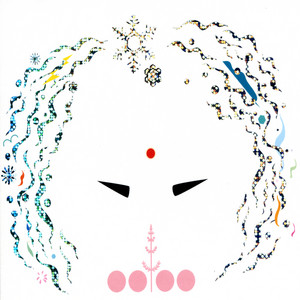 Given the way the Boredoms loom large, that the Boredoms’ drummer Yoshimi’s other swirl/dot-matrix face slap/band can function at all is amazing, but that’s not even the end of it. OOIOO (either a binary ode to the computer age, or the complete reduction of girl group aesthetic to its own binary expressive “ooh-ee-ooh”) have advantages over the Boredoms that might not be readily apparent when trying to separate the behemoth from the shadow (the shadow often the darker of the two). Where Eye’s studio-gauze blends the chaotic genre implosion that is the Boredom’s stock-in-trade to a sun-glint divinity circle, OOIOO are able to flit from style to style without having their foundations collapse (or, if they do, it’s normally the band doing it, rather than the production). This emphasis on musicianship also funnels through the arrangements; OOIOO often sound like an uneven stack of plates, where each instrument is working its way into place, rather than embedded in an unfettered onslaught of righteous Boredoms’ magic. In other words, while the Boredoms started punk and became capital “m” Music impossible to qualify, OOIOO takes the Boredoms’ approach and makes it far more punk.

And if that means less epiphanies, so be it, because the wake of Vision Creation Newsun (2001) has been fairly stale, and Yoshimi seems to realize that if every little thing is a glory note people will stop getting excited. Taiga draws the lines first penned by Kila Kila Kila (2004) further, with more proficiency and ease, and following the lead of tracks like “on mani” and “emeralddragonfly,” the songs on Taiga lithely join the experimental with pop potential, consistently muscling between full throttle avant-gardisms and unabashed pop synthesis. Those who found the intro to Kila Kila Kila too excruciating and the mostly-hit-but-when-miss-miss-wide track listings of Feather Float (2001) and Gold and Green (2005 stateside, but Japan-only release in 2002) will be happy to know that Taiga solves both problems, and all of its tracks are kila kila killer.

“Uma” gets by on charm alone, scrolling wicked high school cheers over damaged drumming (courtesy of newest OOIOO AI) and featuring the only melodic use of a gym whistle I can think of. At various points synth debris (low drones, wicked baroque breaks) alter the tone of the piece, but the basic motif stays rumbly, dipping into North America’s fetish for Japanese schoolgirls and returning the objectification as a message signed, “Dude, Tarantino! You’re the punchline.” Rattling bones achieved, OOIOO turns to muscles, tendons, and spines, slicking out “kms” with harsh, almost-dissonant two-note guitar harmonies between Yoshimi and Kayan as Aya is all bass slides underneath. Bongos usher in a tempo for the track, and then everything drops out except for bass, and then AI comes crashing back in, opening up the original Crimson-esque melody as a free jazz riff, and the band proceeds to wank some straight Eric Dolphy shit like it’s second hat. I don’t even mind the close-to-Ono vocals over top; it’s sort of like Nina Simone singing after stubbing her toe. And then AI heralds another change, the bongo re-enters pawing a heavily flanged guitar, and the band rocks some fierce Grateful Dead-meets-This-Heat-in-a-deserted-alley-and-This-Heat-obviously-wins fantasies, right before a flurry of electronics enter to compete with AI for face time.

“Kms” drizzles into the Black Dice Beaches and Canyons (2002) vibe of “uja,” all steel pans (courtesy of guest Tonchi) and knotted percussion and stray synth spirals, but Yoshimi mixes neat Mothers of Invention Freak Out! (1966) accents (notably, the severely acoustic piano line that sounds positively out of space next to the normalized synthetic textures everywhere else) and lovely vocal nuances that sound like the Animal Collective stopped by for a visit. And then the whole track dissolves in a synth blurp, and suddenly we get “uja” rephrased as El-P backing Prince, and the cheesy synths and moogs are employed delicately and perfectly as AI rocks the toms and Aya plays one of those hypnotic bass grooves more appropriate for jazz but hilarious and poignant here. The track ends with everybody chanting “oh, uh oh,” as the steel drums and synths return, fading into the drum rolls and delayed accordion that usher in “grs.” The steel percussion becomes a lilting accompaniment as Yoshimi sings overtop, eventually joined in harmony by Kayan and Aya. The slow, deliberate pacing makes for a beautiful transition into “ats,” which has Aya throwing bass notes into between organ chimes and under the continued vocal harmonies of all three singers. A guitar squeaks in the background; AI keeps time on bongos while a marimba begins to dance in the background. Yoshimi lobs an Umma Gumma-era Rick Wright solo into the mix, all three women ascend each others vocals—“ra / Ra / RA!”—until AI flips the switch, and the band rocks out, hinting at the psychedelic work of Agitation Free.

Multi-part “sai” begins as a strange guitar duet between Kayan and Yoshimi. Aya and AI enter as anchors, dropping elastic bass and toms and hats to ground the vibrant axe work of their bandmates. This is the closest we get to Yoshimi actually singing a song, and she delivers, fluctuating between harsh, clipped anger and soft close-harmony. When the other instruments drop out, leaving only AI’s toms and the three vocalists, we get one of those classic Yoshimi vocal moments that so benefited the Boredoms. And then, of course, the song completely changes direction, adopting shimmery percussion, a stilted bass line accented with harsh guitar harmonics, and a severely effects-laden guitar melody that drives the rest right into a double-time vocal interlocution by Yoshimi before returning to the slower riff—except Aya is playing every note in her riff now—this time with vocals. The track takes its time, loping through keyboard solos and a clever bit where Yoshimi Patton’s her voice against a decaying synth line as AI throws heavy toms in the upper left channel, and then—and, please, everybody sigh along with the band—we enter the first real rock section of the album. Well…as rock as OOIOO gets, anyway. Raise pinky and index fingers and tap along for the couple of minutes you get before feedback dissolves the outburst in a wash and we return to a reinvigorated rendition of the opening riffs. And what better way to follow this behemoth than with another cheer squad intervention, this time boasting the “Hey Mickey” handclap riff played on what sounds like oil barrels and sweat? Neat manipulated vocal samples rotate in the background, and eventually a flute squabbles with a motorcycle engine as Yoshimi really lets her pitch run wild. It’s a great contrast to “uma”; while that track seems coy and willing to be in on the joke, “umo” is just angry, lashing out at everything in its vicinity.

Taiga saves the best for last as “ioa” lashes a pretty vocal melody to a raft made of pretty guitar riffs and drum eruptions before stop-starting into a half-time version of itself, replacing the frantic plucking with an incredibly funky bassline and abundant acoustic percussion as Yoshimi and Kayan deliberately and randomly hit notes off the original riff but still in key. As Kayan shifts to a funk riff herself, Yoshimi moogs out, old school hip-hop claps enter the mix, and the whole track veers off into something all your favorite jam bands would just fucking die to be able to produce, and then it’s just…over. And even with the false ending, it’s unnervingly satisfying, and the silence becomes just as integral to OOIOO’s approach as their beautiful noise.

I’ve mentioned a lot of bands here, and I don’t want to suggest that OOIOO is in any way derivative. Rather, they succeed where a lot of other bands of their ilk fail. They pull off Mr. Bungle moments without the frustrating self-importance of Mr. Bungle (“look at what we’re doing!”). They manage prog-homage without falling into the prog-homage trap of sounding like your record collection consists entirely of King Crimson and Slayer. They jam with purpose, instead of veering into self-congratulatory musical rants. They work through the same themes as the Boredoms without making every moment transcendental, and it comes off not as a failure to achieve those heights but rather a statement of purpose: if the Boredoms play out like a friend suddenly getting stigmata, OOIOO is the aftershock, when they reveal to you in secret that it was all a premeditated act. OOIOO isn’t the magic show; it’s the explanation of how the tricks work. As much as convening with the sun is nice, Taiga allows us to see the grandiose conations of simple everyday frustrations and humor, by virtue of being more immediate, more vital, and more…well…human than the Boredoms have been in years. And that’s important too, because the Boredoms are human, and on Taiga, OOIOO shows at least one of them making phenomenal music that’s a little less bloodless.