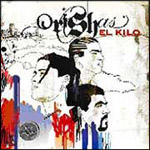 Tweet
Talking about Orishas without bringing up issues of historical significance can be tricky. Back in 2000, the Cuban expatriates released A Lo Cubano which, while certainly not the first of its kind, was quite possibly the best Spanish-language rap album ever released (how’s that for a broad statement?). Orishas married afro-cuban jazz rhythms with hip-hop sensibilities, and the results were nothing short of nuclear hot. The follow-up, 2003’s excellent Emigrante didn’t get nearly as much press, but ultimately may be a more interesting album.

Now, following the same zero-press attention approach as Emigrante, comes El Kilo. I’m sure that if my grasp of music theory, latin jazz, and the Parisian music scene that Orishas live in was stronger, I could better appreciate the subtler changes that have been made for El Kilo. As it stands, I’m left listening to an album that, while not hugely innovative (with the exception of some interesting percussion), still manages to capture that same deep funk of their previous work and shows no sign of flagging from Orishas.

It helps any album to start on a track as deeply hip as “Naci Orishas.” With some brilliant and uncharacteristically skittish drumming, the track bumps through a half-hearted piano line and all-out funk horn section, letting all three Orishas get a chance to rip up the track. They take it in the opposite direction with the down-tempo “Distinto,” which would just sort of slide by if not for the near-perfect southern funk chorus.

The rest of the album matches up, and though the MCs never falter, and the beats are always hotter than just about anything in the American mainstream, at first the album just doesn’t quite have the immediacy of A Lo Cubano or the clear mastery of Emigrante. I was tempted to write off El Kilo as another victim of creative stagnation, but given a chance, it actually stands up quite well to the first two albums.

First, the beats here have improved. Tracks like “Naci Orishas” and “Tumbando y Dando” show a willingness to experiment with new percussive elements, and while most of the other tracks fall back onto familiar synths, they’ve filled out, leaving bass lines fat and the beats deep. The instrumentation, while also nothing new (there’s nothing as immediately creative as the backwards looping beat of “Que Bola?” from Emigrante) proves once again that afro-cuban instrumentation and hip-hop are a match made in heaven.

Second, track by track, El Kilo is remarkably consistent, with plenty of hooks thrown in where you don’t see them coming. The huge bass groove with the coda to “Elegante,” the insane chorus of “Que se Bote,” the jumpy electronica element of “Stress,” the morphing dancehall reggaeton beat of “Quien te Dijo”: it’s these little touches that set the album apart.

El Kilo may not be a huge step forward for Orishas, and probably isn’t moving rap to the next level. You should check out TTC’s Bâtards Sensibles if you want a genuinely forward-thinking rap album. But, at the end of the day, I’d still be reaching for El Kilo; it’s hard to turn down the deep funk, afro-Cuban rhythms and strong MC skills here. This proves, once again, that you can avoid saving rap and still sound fresh.