Other Records by OutKast 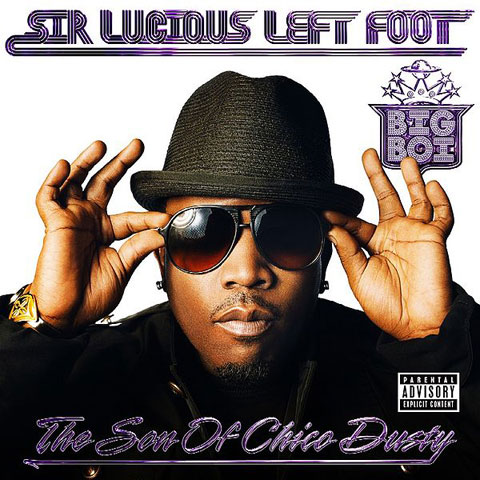 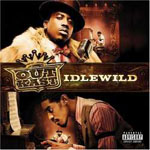 In the movie Idlewild there’s a scene where Trumpy (Terrence Howard) harasses Percival (Andre 3000), bellowing that he’s tired of hearing the piano ditty that Percival’s working on. Percival informs Trumpy that Rooster (Big Boi) told him he could play whatever he wanted. It’s easy to see that the film equates Trumpy with the keep-it-real haters, that much of Percival’s storyline exists as a justification for Andre 3000’s increasingly “eccentric” aspirations, that we’re to accept that Big Boi is just as supportive of Andre 3000 as Rooster is of his childhood friend. Beyond crushing on Paula Patton, the main hook of the movie is connecting its players to its makers. Rooster/Big Boi is an affable pimp who scuffles with commercialism while juggling family problems and the occasional reminder of religious bearing; Percival/Andre is introspective and full of repressed lust for both women and his own dreams. Percival helps Big Boi succeed. Rooster keeps Andre on the ground. Perhaps the grace note for the avid OutKast follower is when Rooster tells Percival that he needs to take the music he’s chest-clenching and share it with the world -- that people need to hear his brand of art. It’s a sweet sentiment that, in its way, sheds a new light on the duo’s discography, as well as the record at hand. Despite all its misguided excess, the album Idlewild is kept upright through that desire to give.

Most recently, OutKast have given us two albums for the price of one, and it could be that the film’s script is footnoting that particular “generosity” or attempting to rewrite its history. Regardless, if we’re gonna draw parallels to any previous OutKast record, let’s bypass Speakerboxxx/The Love Below (2003) and instead draw them to Stankonia (2000). Structurally, Idle and Stank are identical, kicking the door down with a gut-rattling pop explosion (“Mighty O”; “Gasoline Dreams”) and fizzling out into self-parody over an excruciating runtime. It’s just that instead of fusing Prince’s rock side with P-Funk’s jazz side with Dr. Dre’s thug side -- as Stankonia famously did -- Idlewild’s sources of inspiration are inherently less interesting: Neptunes/Spears pop, neo-soul, fucking ragtime. Where Stankonia was nerve gas in Chocolate City, Idlewild is opium at the lindy-hop. That’s not necessarily damning: Andre 3000 can pull off anything, including orange suspenders, and “Idlewild Blues” is almost convincing as a swamp-stomp for this suave Age. Making show-tunes sound passable, though, is a shallow triumph; the stretch of masturbatory neo-soul that closes the album belongs nowhere, except maybe on a period flick soundtrack, which this supposedly is. The shit gets complicated out of critical affairs when, in various interviews, Dre and Big Boi insist that we take Idlewild as the next OutKast record; since many already cough over the split LP taboo and point to Stankonia as the last OutKast record, there’s a lot of uncertainty about accepting this present multimedia invite.

The reticence is born of reverence: an OutKast record is (should be) something holy, an emergence of devastating efficiency through unbridled creativity. Aquemini (1998) is one of the greatest hip-hop records of all time for completely different reasons than the other greatest hip-hop records of all time, and that’s because OutKast aren’t just some rappers over some producers’ beats -- they are their own aesthetic, their own school. OutKast deal in something which no one else has; they deal in OutKast. The power of identity is something which they’ve been teaching hip-hop, by example, for the past decade. But now it’s becoming clear that trying to be OutKast is a lot harder than just being OutKast ever was. Still, the show must go on. It could be that this filmic extrapolation of the OutKast state is more definitely meta than most movie pundits would recognize or give credit for.

Idlewild was being planned and shot in the bipolar wake of Speakerboxxx/The Love Below, and that album’s presence is far more strongly felt than the film’s actual soundtrack. “Bowtie” and “Rooster” are the backing to some energetic scenes of “swop” (“swing + hip-hop” term coined by Hinton Battle, film’s dance choreographer); stunning remakes of “Take Off Your Cool” and “She Lives in My Lap” provide impetus to key moments in the Percival storyline, which was likely written around those songs to begin with. As far as tracks from Idlewild the album, though, it’s just “Makes No Sense At All” and “Mutron Angel” and a few other snippets that flit by more as music cues than “hills are alive” hits. “The Mighty O” isn’t even on the damn credits. The flick flipbooks its way through sex scenes, action sequences, camera gimmicks, animated details, and Macy Gray outfits with the aplomb of OutKast’s charisma but little of their zen. Idlewild the movie is less a musical than it is a disorganized (if fun) romp with some nifty new Speakerboxxx/The Love Below music videos attached; Idlewild the album is less a soundtrack than it is one of those “inspired by the movie” deals, in this case almost coincidentally made by the same people responsible for that movie.

With that said, this “soundtrack” -- and, yes, we’re putting that fucker in quotation marks -- is deft, flawed, entertaining, thrilling, and disappointing, often at the same time. Front-running single “Morris Brown” is probably the best marching band jam to enter the top 40, but where the fuck is Big Boi? Twirling his baton in front of the band in a brief cameo (the crowd goes wild), then ducking out behind the fat tuba player to let Scar croon for two goddamn minutes. It’s an irresistible hook, certainly, tugging the listener down like so much groupie, but at least “The Way You Move” had a few raps, a few puns, a midget joke. On “Morris Brown,” like the movie and album from which it was culled, Big Boi just seems to be filling in the gaps between each mammoth, CGI-enhanced setpiece. There are no true main characters, after all, in a musical; Joseph’s huge, but his Technicolor Dream Coat is huger. An OutKast fan doesn’t care about this extraneous, big production shit. An OutKast fan’s happy home is somewhere snug between Andre’s alien leer and Big Boi’s tarantula flow, Organized Noize crushing drums beneath.

This OutKast fan -- hypothetical, of course, no one we know -- has set his Kast to the first three records, the fourth and fifth as interesting, listenable missteps. By all measurable qualifications, this is a pretty “true” OutKast fan: conversant with the catalogue, observant of their progressive refinements, despondent toward their eventual overreach. There are legions, though, for whom “Rosa Parks” is the starting point and “Hey Ya” the destination; in a lot of ways, Idlewild is for these people. If the transition from rousing, funky hip-hop to slick, propulsive pop sacrifices nothing for the listener, the listener will probably be thrilled with this vaudeville -- for the first half, at least. Therein lies shimmering school-boy smarm like “N2U,” painfully eloquent Aquemini throwback “Chronomentrophobia,” and the incandescent nostalgia of “The Train.” After placid, rap-rotary beaut “Hollywood Divorce,” the record wobbles between unsuccessful and intolerable, coming up for air only with back-to-back late-album highlights “In Your Dreams” and “PJ & Rooster.” Which means that, on this twenty-five track album, there are ten good tracks. Eleven if you don’t mind Snoop Dogg.

At times, the problem seems as simple as a lack of concentration. The aforementioned “Chronomentrophobia” goes through the trouble of a spoken word intro, building into a searing, melancholy, string-laden hook, collapsing back hushed for Andre’s rap (gasp), which lasts for forty thrilling seconds (sigh), and then the track cuts out just when we’re ready for another chorus as victory lap and six more raps from the rest of the posse, and maybe a hype Cee-Lo cameo or a vocoder solo or something. But none of that happens. It’s just two minutes long, and even in that state it’s some of the hottest shit on the album, regardless of whether you set your thermometer by hip-hop or pop. What makes this shameful isn’t that they don’t flaunt the song’s triumph; it’s that, with stellar music like this under their belt, they relish such attention on jazz-hand jack-shit like “Call the Law” and the sluggish choir-warp of “Mutron Angel.” The former, like the majority of the tracks here, doesn’t even appear in the movie and so has little excuse for existing. Without a show- accompanying them, these are just -tunes, and OutKast do not make tunes. OutKast make OutKast songs. Also known as “the fucking jams.”

It can feel, at times, that the whole is now just the sum of its parts, and that the refined chemistry that unified and rushed vibrant through Aquemini, all the way up to its title, has been sacrificed for, like, Terrence Howard’s moustache and whatever has to come with it. The OutKast fan is left with a compressed, indestructible lust for the release of 10 the Hard Way, their rumored actual-rap album, not their actual not-rap album that is this thing. Idlewild, then, cuts a conflicted shape, a difficult wedge in a hallowed, multifarious discography. It finds our leaders wandering too far off the map to be followed. But -- and this is the important fact, and it’s not a matter of reconciliation, nor of wishing for better luck next time -- they’re still leading. As to where, though, who the hell knows at this point, or, more importantly, does anyone care any more (and should they)? This album’s sprawl answers a few questions (What do OutKast do next? Can they make a mediocre record?), but then begs a few more hundred. Like, should the new Jay-Z record contain saloon piano solos? Of course not. But maybe the new Jay-Z can flip an Idlewild saloon piano solo into something that’s actually fresh.

After some tragic, morbid shit goes down, the film’s oddly upbeat ending is still unwittingly ominous, separating the two luminaries into the spheres for which their real-life counterparts seem headed: Big Boi kicking back in a white house with about twenty kids, Andre scatting and tap-dancing. But in that moment where Rooster’s telling Percival that the world needs what they’ve got, it’s hard not to buy into it, and maybe it’s because deep down we already believe pretty zealously, even now, in the importance of OutKast. We love them for their striving to give us music that pleases while expanding the boundaries of what pleases -- enlightening through the way in which it excites. So when Dre assures the press that things are still tight, it’s not something on which to piss a mickey of pessimism. It’s something to cling to, risking delusion. Even a fat-with-filler, inspired-by-our-uninspired-movie album like Idlewild shows why we should hope.