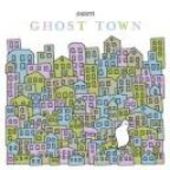 Mike Kinsella doesn’t mince words. Which is to say that he’s a songwriter who finds little value in allegory or flowery imagery when he owns such a convincing arsenal of blunt honesty. Whether he’s bemoaning those who come out to his shows as “the idiots in the back” (“Curtain Call”) or detailing the vices of colleagues he despises (“Bad News”), Kinsella’s body of work under the Owen moniker often steers the introspection entitled to singer-songwriters toward a therapeutic extreme. For the first half of the ’00s, Kinsella’s muse bounced between romantic betrayal and self-righteous self-pity; he typically starred as the victim and recorded these albums at his mother’s house. You’re probably starting to get the picture.

Nonetheless, Owen has amassed a humble career by telling it how it is, and it works because that unflinching honesty which bandages his bad days also unravels Kinsella’s vast emotional core. Ghost Town mostly busies itself with the latter task. The Chicago-based musician’s keen ear for tender arrangements has rarely found such a match, muse-wise, as when Kinsella executes the father/daughter coming-of-age lullaby “Mother’s Milk Breath.” Owen’s vocal delivery managed to poeticize plain speech even back when he was singling out random bar girls to score with (on “Poor Souls,” from 2002’s No Good for No One Now), so it’s hardly surprising to hear how disarmingly his timbre sits upon balladry that deals with anything other than him being an asshole.

Luckily, as his focus on formative heartbreak has slowly graduated to the trials of marriage and children, Owen’s catalog has likewise matured in sound. Supplementing his once stark acoustic foundations and intricate electric guitar flourishes are lush accompaniments—like the heart-string tugging orchestral bits underlying “Too Many Moons” and “An Animal”—that rendered New Leaves (2009) such an upgrade from prior efforts. As well as deepening the dramatic stakes, Ghost Town offers fresh bite with a dissonance that takes center-stage in “No Place Like Home”‘s peppered guitar work and “I Believe”’s defiant, kick-drum riddled climax.

Keep in mind: these are Owen-styled rock songs, in essence his sad-sack acoustic fare boosted to mid-tempo with extra feedback. Still, Ghost Town‘s poles present a curious divide for Kinsella to walk following the perfectly measured and orchestrated New Leaves. Gone is that album’s wistful nostalgia and unhurried tree-ring counting; here, Owen has illustrated a scene greater than his ego, one that jostles between faith and resignation with regards to loved ones, family, friends, and the greater sociopolitical headaches we consider rites of passage.

In what stands as perhaps his sole allegory, the “ghost town” Owen sketches out over these nine tracks is just bittersweet reality; the expectation and eventual hope that whatever house and people we leave on the way to the office (or, say, week one of a two-week tour) will be changeless when we return. “I’m home and somehow while I was gone,” he sings on “The Armoire.” “This house I’d left for dead had lingered on.” Despite singing “I’ve a thirst for skirts and hell to raise” a few songs later, Kinsella now accepts the cozy shackles of his lifestyle with a minimum of begrudging sentiment. And if it’s within that claustrophobic, anti rock-star environment that brings Owen his songwriting transcendence, the irony certainly isn’t lost on him.