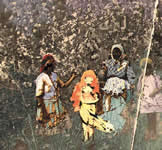 The everything-but-the-kitchen-sink approach to instrumentation is typically associated with lo-fi aesthetics. Paavoharju are out to change that. Even more than the fantastic Yhä Hämärää (2005), Laulu Laakson Kukista translates the homespun psych-folk that distinguishes the Fonal label into near-epic, shockingly lush strokes of impressionist pop. Here also is everything that lies in between classical orchestration and musique concrete; the music of Paavoharju constantly expands and contracts in ways which are humble, majestic, and just out-and-out phenomenal. The fact that the band happens to be part of a mysterious Finnish commune of devout Christians is probably dwelt on too much in reviews, but it’s pertinent in at least one way: how else do you explain something so labored over and yet so earnest and void of pretension, except to say that the band’s channeling something greater than themselves? Suffice it to say speculation about what exactly makes this band so vivid and unlike anything else out there at the moment is bound to produce hypotheses of questionable substance and more than a little delirium, but bear with me—this music is more than worth it.

Comparisons to other music are as inevitable as they are insufficient; there’s any number of maverick acts out there that I could compare Paavoharju to. But that comparison would only work to describe a sense of shared ground with other bands that use any and all means to achieve a specific sound. Rather, I’d hazard to say that Paavoharju are one of the first bands to fully incorporate what found-sound masters like Philip Jeck have developed into a pop framework. Which is to say that Laulu Laakson Kukista sounds like fragments of a thousand pop records, but rather than assembling them into a drifting ambient landscape like Jeck the band build these fragments back into pop songs. Now, they don’t try and pass it off as straightforward pop; they allow all the static, disembodied voices and samples, and lost/undiscovered choral etudes to organically coalesce into silken, marmoreal slices of transcendence, and then they allow them to break apart again. For example, the fact that “Kevätrumpu” carries melodies that wouldn’t be out of place on an Annie or Róisín Murphy single is astounding in itself; the fact that the static and backwards AM radio samples are always poised around its Röyksopp-esque production in an almost subliminal way is something like a miracle. The modus operandi of this album, besides attempting to unite virtually every contemporary strain of Scandinavian music from Peter Bjorn & John to Kemialliset Ystävät, could be to show how much even the slickest pop will someday become an artifact.

Still, the fact that it’s not—that this is the premeditated, controlled work of a specific group of people (even if the details and credits are somewhat hazy)—is what casts this beast beyond the realm of accidental masterpieces. Leena Uotila’s voice is central, or at least as central as it’s possible to be in a sonic universe where everything is ephemeral, and she sings in crystal-clear soprano, offering up the strange persistence of clarity amidst the blooming chaos of nature. Some of the more pop-oriented tracks feel like lost torch songs, blasting through the fury of static and crumbling instruments as if they needed to announce themselves with unabashed grandeur before they drown in the noise. This quality is equally evident on the tracks where whoever handles the male vocals sings, especially “Uskallan”: opening and closing with the cut-up sound of a baby gasping for air, the track builds into a disco-rhythm with synths alternately smooth and static-drenched threatening to consume the vocals halfway through.

The melodies are astounding on their own—even if you don’t speak Finnish—but far more important is how the band refuses to take them for granted. Outside of the disco-pop of “Uskallan” and “Kevätrumpu,” melody is treated in a similar way to Alejandra & Aeron’s documentary/folk field recording Bousha Blue Blazes (2003): melodies are employed as a means of evoking another time and place, and considering how much of Laulu Laakson Kukista picks through Romantic and Baroque relics, it succeeds brilliantly. Of course, in the spirit of an album which constantly refuses to be pinned down, this is only half the story: sometimes the band breaks through with something so immediate and bracing it’s hard to believe it sits perfectly alongside the album’s restless experimentation. “Italialaisella Laivalla” is instructive in this regard: it starts as a simple folk song with gentle guitar-picking and vocals but then begins to introduce menacing electronics and bows scraping against strings erratically. But this dark shroud is only hinted at; the song breaks off into an outro of slow, carnivalesque French accordion. It sounds like something that should be too suffocating in its wealth of ideas to be evocative, but somehow in combination it creates something listless and urgent at the same time, like The Catcher in the Rye.

If there’s any relationship between Paavoharju and other contemporary Christian music, it lies in the fact that both tend to completely ignore all sense of “fashionable” melody in favour of something achingly naïve and immediate. There are also the traditional choral arrangements of piano/organ/vocals on tracks like “Sumuvirsi” and “Kirkonväki”; these melodies reflect Bach and a long tradition of church music moreso than anything current. The latter track also happens to feature some demented, horribly distorted and slowed-down voices, though oddly they only add to the reverence of the track as a whole.

Which brings me to my one point of contention, or at least confusion. The band makes a point of stating their Christian beliefs in what little publicity they offer and even state in their website’s 10-point primer that they’re “against the use of drugs.” Far be it from me to challenge the band’s beliefs, and I can even understand to a certain extent the latter point—when Agaetis Bryjun (1999) dropped Sigur Rós made a point of disavowing any relationship between their music and narcotics and perhaps Paavoharju have a similar agenda—but it seems that as a perceptual experience Laulu Laakson Kukista is too open to decry any method that one might use to approach it, drugs included. And while much of its strength lies in its sense of sober precision, it’s a long cry from asceticism. Maybe I need to understand the Finnish lyrics to comprehend the band’s spiritual convictions, and yet when I listen to them I can’t help but feel something that transcends any specific religion: something that involves purity and innocence, and darkness and light and struggle. Perhaps it’s proof that an artist’s statement always betrays the intentions of the artist, as all these emotional triggers will combine in different ways for every listener. Maybe that’s the real spiritual value of the album: rather than impress their personal convictions, the band acts as a conduit for all these forces to combine and radiate like a prism.