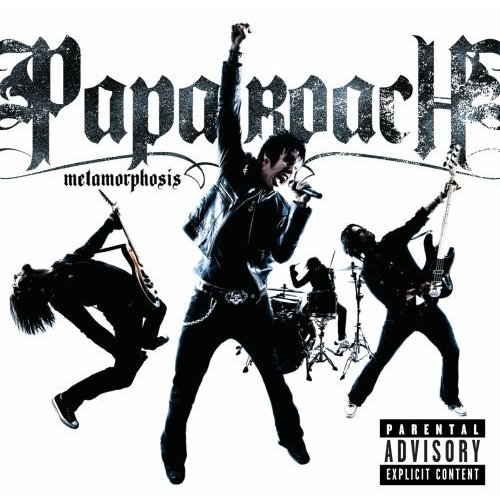 Even at over twenty years distance, hair metal is difficult to understand. Contemporary metal has long since turned its back on its embarrassing forerunner, much of it is so overtly poppy that its claims to be heavy or hardcore or menacing are clearly ridiculous. The overwhelming campiness of it all—the sweat, the neon glam, the power ballads, the titles written in Times New Dangerous—is so hilarious that ironically rocking out has become a North American past time, and yet I can’t tell whether it’s funny because Poison, Enuff Z’Nuff, and Queensryche really seriously blew it, or whether we just aren’t imaginative enough to reconstruct the context in which Kelly Keagy was a sexy, sensitive bad-ass.

I can extend no such mercy to Papa Roach, who have introduced Metamorphosis to the world via the first single “Hollywood Whore.” Perhaps in twenty years people will be laughing at nu metal, modern alternative, corporate rock, or whatever Nickelbacky stuff is called now, but right now, this close, Papa Roach reflects back to us the worst parts of ourselves. In “Hollywood Whore,” Papa Roach’s imagined listener raises a gleeful fist whilst Jacoby Shaddix sings, “You’re so lame, you’re such a bore / I wanna kick your teeth in.” The envisaged amalgam of everyone from Britney Spears and Lindsey Lohan to Courtney Love has problems with drugs, alcohol, fame, and plastic surgery, but in Shaddix’s eyes her main problem is that she’s an immodest woman, and the dripping-with-disdain spoken farewell (“Ha-ha-ha / Don’t let the door hit ya where the good lord split ya honey / Ha-ha-ha”) is the second time the violence in calling her “whore” becomes explicit. That the single barely charted is the only silver lining here. Let’s hope it’s because we’re better than this.

Not much better is “I Almost Told You That I Loved You,” where Shaddix does the “I love your sex” thing with none of the sleaze or silliness of Bon Scott. If being “fun” is the supposed redeeming feature of songs about blow jobs, and all Papa Roach have for us is “I say the damnedest things when you’re on top of me” and “I hate to say it but it has to be said / You look so fragile as I fuck with your head,” then things are pretty grim.

But then out of the dark comes “Lifeline,” the big hit single, and suddenly everything works. The lyrics shift into “vague statements about psychological trauma and/or relationships” mode, the hooks are fat, and the arrangement is downright inspired. (James Michael—producer, organist, and non-Roach—shares a songwriting credit here and on a handful of songs, and one wonders how big his influence was.) The main lead guitar riff is interesting enough—it subdivides two beats into three, three, and two—without being proggy, and provides a knowing rhythmic and harmonic contrast as it stays still while the band enters with shifting chords and a straight beat. This isn’t rocket science, but it is just the shot in the arm that Papa Roach’s bland radio rock needs, and by the time Shaddix enters we’re ready for his Sunset Blvd melody. Guitarist Jerry Horton is on fire throughout, with descending and ascending transitions and changes in strumming that add propulsion to a staid structure. Even the bridge and breakdown are bang-on, and as drummer Tony Palermo switches to snare on all four beats in the outro I know that if every Roach song were this good I’d be proud to call it the resurgence of radio rock.

“Had Enough,” with its attempt at anthemic politics, is an immediate letdown. The rest of the latter half of the album lumbers along with forgettable distorto-riffs and half-screams. The spangly compression that serves them so well on “Lifeline” weighs heavily on songs with one tenth the melodic appeal. Papa Roach would do well to deal in more extremes, explore their metal leanings or their gestures toward ballads with more intensity. Instead, samey mid-tempo rockers abound. “March Out of the Darkness” is the best of the rest, with a ballad feel off the top and a solid chorus switching things up a bit, but it’s a short respite from the parade of banality that rounds out the album. All the shrieking bluster and power-chord wankery notwithstanding, it’s so tough to care about these also-rans that at the end of a long listen you mostly just want to put your head down for a little nap.

Recording a big radio single isn’t easy, and I count many one-hit-wonders among artists I love. Were this album just “Lifeline” and a bunch of lifeless drivel, it would satisfy Clear Channel and their label, and go some way to relieving the tedium that reigns in nu rawk. Rather than simply boring, however, Metamorphosis annoys, scares, and disgusts. With one bright, surprising exception, the songs here either make a terrible impression or they make none at all.