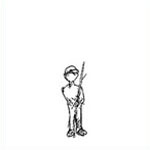 And here I thought the days of exuberant indie-rock were over. Forget Wolf Parade (too stunted by that production) or The Arcade Fire (too self-consciously angst-ridden) – the early part of the new millennium was a gold mine for quirky, lo-fi indie bands, with The Shins’ Oh, Inverted World and Grandaddy’s The Sophtware Slump leading the charge. Then The Shins cleaned up their act, Grandaddy threw out their high-concept sci-fi, and The Flaming Lips followed up a five-star life-destroying work of studio splendor with an unambitious stinker about pink robots. Beulah made an album about break-ups and broke up. The best thing to happen to the genre lately was last year’s reformation of Olivia Tremor Control, who put on a handful of gloriously exultant live shows. Then, out of the blue, came Paper Airplanes.

This is the way indie-rock is supposed to sound: a jumbled-up rollercoaster of sonic arguments that manage to agree just long enough to remember the chorus. The beginning of “The Fences” evokes a more fantastical Built To Spill before the rough edge of singer Marcus Stoesz’s voice begins to reveal itself; while not quite rough enough to compete with any wolf bands, the music of Paper Airplanes is not lacking in weight or heft. What it is, is the work of a band with too many good ideas to let them go to waste.

“Julius” dallies with math-rock guitars before contenting itself with a rock-out chorus suspended over a heavy string section. The instrumental “Boyhood” gets all Jim Guthrie on us, paralleling the violins and the guitars before introducing a series of percussion finales. The strings are a major part of the album, adding a more serious tone that contrasts with the jubilance of songs such as the banjo-inflected “Appalachia,” and the arrangements are consistently (and successfully) surprising. “Curious Phantasm” is a second-half stunner, opening with an infectious guitar line and following up the first chorus with an even catchier hook. The penultimate “Coronation Day” turns up the distortion and raw-throated vocals before settling into a comforting, almost dirge-like refrain that lasts until the drums make a triumphant return.

It’s been a few years since anyone in the indie-rock genre has really made a record that fused fearless arrangements with accessible songwriting so adeptly, and so the Paper Airplanes are a tiny revelation. If you’re realizing how much you miss this stuff – or you’re just getting sick of hearing about the Fiery Furnaces all the damn time – Boyhood is the perfect place to jump back in.