Other Records by Parenthetical Girls 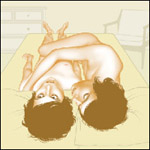 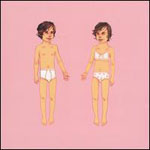 Editor’s note: Do not use gimmick 417 except in case of absolute fucking emergency.

This album (which is actually just an EP, played twice, once the way the band originally released it [to lackluster sales] and now freshly remixed [by Jamie Stewart (among others), no less (from Xiu Xiu)] in hopes of boosting sales) is an odd little thing (like most EPs, really [see also: Sunset Rubdown review (edit: too self-reflexive?)]), not so much because it fails to deliver a complete, satisfying listening experience but because of the thin, slivery way in which it does. Most tracks seem built around a simple melody (like the blossoming refrain of “Inspirational Shortpants” [better (like most tracks here) on the Xiu Xiu side (benefiting from a squelched squalor on the bassline)]), but even when the melodies do find a denouement (through tuba, chimes, cymbal crashes, whispery vox, etc. [et cetera]), the final arrangement is always a bit unorthodox in a way that undermines the whole enterprise (in a good way, though [like, it circumvents expectations while delivering on a promise that you may not’ve heard it make]).

Take, for example, the original version of “Here’s to Forgetting” (which the label has been kind enough to let us host [thanks, Zac (sorry I’m not good at returning emails)], along with another fantastic track [that I plan to address later (but we’ll see how that goes [this gimmick is draining])]). Download it (now, motherfucker). Notice the humming thrush that begins the song, the skittering tempo, the (dare I say it) techno influence on the unchecked downbeat emphasis. The track grows in warmth until it’s lulled to sleep by two iterations of melancholy bass whirrs (that kinda sound like the Postal Service [an album I still like (what?)]), but it’s the slow collapse of the rhythm section (starting at the 1:55 mark) that fulfills the flustery kiss of the beginning. “C-86 is Killing My Life (Xiu Xiu Mix),” meanwhile, is the other track we’ve got for download, but it’s not as indicative of the EP’s sound as “Forgetting” is. Still, it’s a highpoint (all circling shalalalas and mechanic production [think the Russian Futurists all woozy after drinking a bottle of cough syrup]), and (unlike “Forgetting”) it doesn’t fall apart, it simply disintegrates, it simply grinds to a halt (while the shalalalas keep going ad ininitum, indestructible [like angels? (pretentious metaphor)]).

All of which is apparently supposed to gear up anticipation for the upcoming Safe As Houses, which (if [and only if!] it can maintain the instrumental diversity and production polish of this release) may end up being a No Big Hair for the ages (edit: too self-reflexive again? Ask Scott) (or am I just being self-reflexive by asking if I’m being self-reflexive? [discuss later]). Erm, regardless, the album has the woozy vocals of Animal Collective, only ratcheted up with breathless boy/girl dynamics (watch them crash into each other on “Love Connection”), but with a sonic dexterity that AC wholly lacks (okay, most people won’t buy that, but I’m just not sure why AC exists [all this self-reflexive parenthetical bullshit is destroying my credibility (better to close them out and end this thing before I start talking about Jimmy Eat World [fuck, just did (this needs to end [abort abort])])])

This is a good EP. Download the mp3s. I look forward to the full-length. (sigh of relief)

Warning: Gimmick to be used once only, then destroyed