1. The Truth Behind All The Vogues She Sold
2. You Were Too Old For Me
3. We Made Our Way, We Amtrakked
4. Summer Is Almost Here
5. Glorious Ballad Of The Ignored
6. O Honey, We’re Ridiculous
7. Dearest Bernard Levine
8. Little Red Radio
9. Cherry Needs A Name
10. Cherry Tree
11. O My Cherry
12. Citizen’s Army Uniform 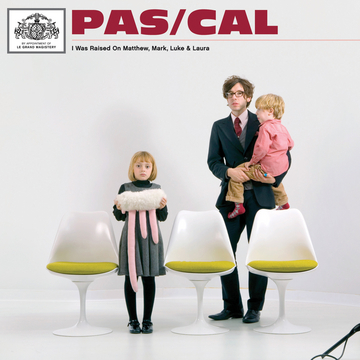 I Was Raised on Matthew, Mark, Luke and Laura

Unless you pay monthly dues to the Red Cardigan Brigade (represented on the Glow by the plucky Davids Greenwald and Ritter), you might justifiably think: do we need another band bent on making their most precious Belle & Sebastian pose while referencing the Beach Boys in their melodies and their song titles (sigh: 2003’s “The Bronze Beached Boys (Come On Let’s Go?)”)? Also: why the hell is Cokemachineglow reviewing this summery dewdrop of a record in October, when most of us sad saps north of the Tropic of Cancer are already bracing for winter to wrap her icy tendrils around our sweet, bobbing adam’s apples?

To answer the first question: you’re right, we don’t. But this is more than a scabby gunnysack of Brian Wilson carbon (dated?) copies. As for the second: PAS/CAL survived four Detroit winters to record this cold-weather salve. If there’s one thing they’ve learned, it’s that a few mojitos and a good imagination will solve most meteorological problems. So, let’s make no bones about it—PAS/CAL’s music is fey like the Lucksmiths or Stuart Murdoch’s slim, hairless forearms, but it’s also dense and baroque and bursting at the seams with anxious energy hurtling in five directions at once. I mean, if PAS/CAL are merely the sum of their worn-proudly-on-their-sleeves influences—XTC, Zumpano, the Kinks, Apples in Stereo, and yes, the Beach Boys and Belle & Sebastian—they mash and mingle their forebears with such gleeful panache that it’s hardly a problem.

An exercise in sustained drama, opener “The Truth Behind All The Vogues She Sold” tumbles through half a dozen shimmering arrangements book-ended by false stops and restarts. The two other members of I Was Raised on Matthew, Mark, Luke, and Laura‘s opening trifecta likewise bypass standard verse/chorus structures, instead threading together loosely related outros and codas and breakdowns with breakneck tempo changes. “We Made Our Way, We Amtrakked,” for instance, skips from Weezer (circa ’94) power riffs to a saloon piano-led Rolling Stones stomp to a whistling solo (seriously).

Which isn’t to say that simpler pleasures are hard to come by. “Summer Is Almost Here” has been sound-tracking beachfront property since 2005 (when it was originally released as a 12”). “The fashion of the season / Is to expose one’s soul through their clothes,” it blushes to swooning strings and handclaps. Another previously released track (this time from 2006’s Dear Sir EP), “Little Red Radio” rides a squealing organ like a Ford Charger with bald tires, ending in a gorgeous heap of fuzzed-out electric guitar and perfectly executed “ooo-ooos.”

Band leader Casimer Pascal’s lyrics, often chirped with an A.C. Newman-like slur, split the difference between lovesick innocence (“Everybody needs someone they can pray to, whao oh oh oh”) and sly lustfulness (“You can mess up her hair, show her small breasts”)…and we all know the type of vicious nun Catholic school connotation “lustfulness” carries. But note its relevance: unlike Murdoch and Co., Pascal (against the album title’s indications) doesn’t seem to be toting any (admittedly en-vogue) Catholic guilt here, which isn’t too surprising. After all, this is the guy who once sang to his lover, “Let’s spill it out on your brother’s bed.” (Sure, we’re not talking Jarvis Cocker levels of indecent fluid exchange, but still.)

If there’s a criticism to be leveled at I Was Raised On, it’s that perhaps the band spent a little too much time injecting its every nook and cranny with gooey caramelized filling. At times a queasy, post-LSD Beatles knock-off, and at others a poor(er) man’s Russian Futurists, the “Cherry” suite frets more about its own sonic embellishment than about cranking out a good tune. “Citizen’s Army Uniform,” on the other hand, displays excellent Unicorns-cum-New Pornos songwriting, but placed next to its earlier, slighter incarnation as “C.A.U. (Sans Muscle)” from the Dear Sir EP, it becomes clear that I Was Raised On could have benefited from more such moments of delicate simplicity. Spending years “perfecting” a pop record should include as much subtraction as it does addition, and some of the songs could stand to peel off a few layers.

Still, there are plenty of reasons for celebration here. With I Was Raised On, PAS/CAL has already done what indie-pop contemporaries Voxtrot couldn’t by recording an LP that delivers on the promise of three decent-to-great EPs. More than just a sign of good things to come, PAS/CAL’s debut stands tall alongside Headlights’ Some Racing, Some Stopping and the French Kicks’ Swimming as one of 2008’s most straightforwardly blissful indie pop records. And it comes with one of those miniature beach umbrellas (hold the band to it).