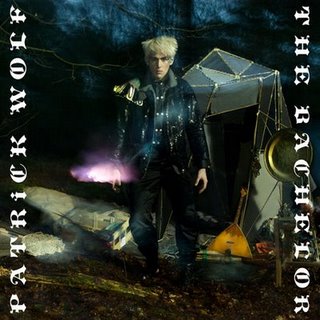 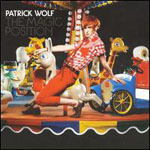 I was a slow convert to the macabre beauty of Patrick Wolf’s sophomore album Wind in the Wires (2005), but a convert nonetheless. It was a vampiric dichotomy of tremulant emotion and rigid control, theatrical posture and adolescent vulnerability, all with such an underlying cockiness that, on first listen, the album wasn’t as immediately likable as it was swaggering under the weight of its own pompous conceit. Only repeated listens uncovered the subtlety of songs like “The Libertine” and “The Weather” and the album’s storm cloud seriousness was finally revealed as part of an absorbingly complex stage figure as versed in Violator (1990) as his own diary. That the adjective “apocalyptic” was thrown around in reviews isn’t really that surprising: Patrick Wolf the teenager was continuously destroyed and built up again over the course of each manifesto of emerging individualism. By album’s end Patrick Wolf the man was born, and his next statement would be his first as an adult.

And, apparently, that adult is an annoying fuckwit. Wind in the Wires‘ follow up, The Magic Position, spreads that first listen, that initial alienation with Wolf’s pomposity, out even further and, over time, the album reveals less; in place of a brooding program of vitriolic introspection is pixie dust arrogance and waifish irritation. One might think I’m simply privileging the suffering of the artist a little too much, or hypocritically getting hung up on the shift in aesthetics that I’ve demanded elsewhere from other artists, but Wolf’s formula of broad-stroked lyricism translates differently to pseudo-twee: there’s simply no way that anyone can sing “To live, to learn, to love / in the major key” on a song as upbeat as the titular track, on which that line is hung, without it sounding like Alanis Morrisette’s particular brand of fortune cookie insight. And it doesn’t help that the song’s underlying sexuality (part of the iconic personality from which Wolf once drew the well water of his inspiration) is somehow overshadowed by his sudden transformation from black-clad prophet and bridge between folk and electronic to knee-high-sock donning kitsch enthusiast.

In places The Magic Position tries to return to its spookier matte: Marianne Faithfull’s guest spot on “Magpie” temporarily rekindles Wolf’s healthier dichotomies, the song’s atmospheric gild using a fairytale’s formula that newfound joy must always be counterbalanced with potential danger—a child’s world encapsulated in narrative. The embryonic “The Bluebell” / “Bluebells” suite manages to punch out of the album’s flimsily operatic structure and tie a couple of aesthetic ideas together, and the pump and grind of “Overture” is one of the better openers of the year, a recurring and engaging memory of that interstitial space between the major categories of electronic and organic, pop and opera, high and low art. Those dichotomies once fed directly back into Wolf himself: androgynous, oscillating, and vagueness were the rule of the day. The Magic Position is happier, and that kind of concrete shift acknowledges a solid starting point to begin with, retrospectively undoing good work. It would have been difficult to know what Wolf really was like having only Lycanthropy (2004) and Wind in the Wires to go on. The Magic Position does all the work for us, thus not giving the listener any credit at all.

For an album as technically adept as this one, it’s interesting that Wolf’s personality gets so clumsily in the way of his music. I was looking forward to seeing how he might continue the disintegration of his personality by putting yet more distance between it and his music as a shared concept. Instead we get a clearer look at Wolf, and, disappointingly, he’s still the little boy we thought we left behind a couple of years ago. Only now the boy isn’t shuddering and afraid, confronting through no choice of his own the man he is becoming. Now we have perpetual enchantment, without crisis, and no drive to the plot of this kid’s life.