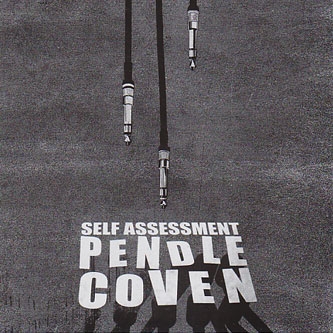 Seriously, how can you not adore Modern Love? The reincarnation of Pelicanneck Records has pulled some mighty fine strokes in its lifetime—poaching Claro Intelecto and wet-nursing Echospace’s crystal Coldest Season (2007)—so it gives me a glow to find they’ve harnessed those two greats’ power for their latest batch of dark warehouse menace. The voyages into dub techno continue with the debut from Pendle Coven, the house-share between Gary Howell and Miles Whittaker, movers from the Cottonopolis club scene. Like many of Modern Love’s high points it’s a record in a record in a record, with nine of the eleven tracks previously available as eBay-friendly waxes. Side by side in one seventy minute sitting, though, their power goes up like a picket line—no more latex gloves and butterfly pliers to slide the black slabs out of their gatefolds; just hit play and watch the plaster dance. You really don’t want to iTunes this shit unless you’re rigged to some serious boomers: when the beat turns in on “IAMNOMAN,” flitting like a giant hare’s heart rate, the street will believe Lewis Carroll’s next door with a Slam Man. You’re sparring with after-dark drum n bass here, something to spook out the last wave of doormen who’ve polished off the confiscated coke. Comedown ahoy; suddenly the wall-flowers are thorny.

Self Assessment‘s bleak and rumbling textures are something of a double-edged sword—they don’t get caught in the Möbius that ensnares a lot of deep techno, too clever for something like that. Rather than swear allegiance to tape delay and discontinued limited Rolands, the Coven prefer to drift, grey and powerful like the smell of cement as they dive into Manchester’s subconscious. There’s an industrial hangover enveloping the city—something that once was jungle, pads invoking pre-NME Warp—but it’s matched by portions of light, bouncing everywhere in time with the arctic plumes. “Chord Calculus” is seven minutes of what sounds like ringtones of the gods, white steam rolling to a sleepy throb, while the energetic “Optimal” is your very own level of Little Big Planet that’s equal parts Detroit and Deansgate. Yes, the bionic Basic Channel that these boys play around with boasts some harmonious tones when it wants to, going double aspect in the “too cool to dance brother but fuck me those beats” direction. It’s an uneven rally but the crowd comes together, marking Self Assessment as some kind of milestone in dub techno: it’s not often that subgenres collide this healthily. You even get a tiny bit of Type to start off on with “Aged Drone”‘s glass migraine scraping round a test signal, and the hidden fade of “Exigen” reflecting SETI interference off the plains of out-there Australia. I’m serious.

I’m serious: two words that the dub/warehouse crossover always needed to secure itself sponsorship. People really party to this chug and rumble, all this ultra-low sophisticated throbbing? I’m serious, and Self Assessment tattoos the two words to itself with the nerve of a gem setter, going from foggy knots of champagne fizz to dark stalagmites in a single stroke. Old hats can slither to its tiny timed clicks; newcomers will take to its cloudy oomph like a snorkeler. Anyone’s who’s ever lived in the capital and wondered where hangars figure in the heartbeat should get acquainted with Pendle Coven pronto. You don’t tire out the grinders in boiler suits with the threat of a three-day week. Machinists will always run the city.