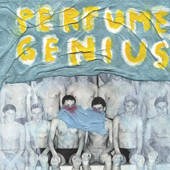 Put Your Back N 2 It

In the last several years, Seattle has come considerably closer to exorcising the ghosts of grunge and post-grunge, as distinct strains of Pacific Northwest folk and hip-hop have begun to find international audiences by way of the populist successes of artists like Fleet Foxes, the Head and the Heart, and Macklemore, among many others. Though other bands in the city and its surrounding areas are by no means denying its existence (for evidence of this, note that local band M. Women’s Faithful is one of the most popular records tagged “grunge” on Bandcamp), the musicians and labels who grew up around it in some way or another have all but deserted it totally, and with good reason; in the wake of Nickelback, no reasonable young person could possibly aspire to ape the bands that led to their success.

Yet Perfume Genius’ Michael Hadreas, despite writing and recording songs that could be labeled “folk,” can’t be lumped in with the city’s locals. On his 2010 debut, Learning, Hadreas recorded painfully spare songs with strikingly effective details, peppering stories of abuse and the first steps toward recovery with mentions of stolen mouthwash and Joy Division cassettes made by predatory teachers. The fact that he made them primarily on a rickety upright piano and supposedly through a digital headset intended to be used while playing EverQuest, accompanied selectively by no-budget keyboard drones for atmosphere, only amplified their potency. With Put Your Back N 2 It, its followup, Hadreas sounds considerably more confident, as he trades the isolation of his mother’s house in Seattle’s suburbs for studios and larger arrangements. He also changes up his songwriting, fixating less on how individuals hurt themselves and each other to instead speak in more general terms about pain and healing, a move that works remarkably well given that its predecessor was a triumph of confession.

Though album opener “Awol Marine” initially sounds like a continuation from where his debut left off, with a bruised piano melody making up its first moments, the song quickly makes clear that Hadreas’ goals aren’t quite the same this time around; his vocals emerge further back in the mix between a wall of fake strings and the sound of a voice breathing in and out of sequence before a wall of noise swallows the entire production. It immediately leads into “Normal Song,” a sparse guitar-and-voice treatment in which his vocals are front and center. “No violence / no matter how bad / can darken the heart / or tear it apart,” he sings at the end of one of his verses, but rather than let the song explode into a huge chorus or a moment of release, he instead simply cuts the figure and the song off entirely, disarming the potential triteness of platitudes by leaving much of his work’s tension largely unresolved. Since he so rarely grants resolution, when he goes for it, as he does in the repeated lines at the end of “Dark Parts,” they gain power through scarcity.

And when Hadreas fully embraces his new surroundings, he yields his greatest developments. On “No Tear,” “17,” and the stunning “Hood,” his expanded chamber pop arrangements and his vocal performances practically recall those of Antony Hegarty’s, yet never seem derivative despite the potential for overlap. Unlike Hegarty, whose work explored gender identity on and the environment, Hadreas, who is openly gay, rarely speaks of transformation or anything beyond the here and now, is focused on much more immediate concerns, like whether or not he’ll ever be able to hold a lover’s hand “on a crowded street,” as he sings in “All Waters,” and survival—both for himself and others—undercut by countless moments of desperation.

Though his work is texturally interesting, it never romanticizes the trauma it puts on display or ironically celebrates aspects of it. For all its seriousness, it’s the absence of big moments and Hadreas’ refusal to give in to easy outs that make what he does so compelling. While it’s all but expected for bedroom musicians to expand their palettes when presented with opportunities to do so, that this expansion repurposes Hadreas’ writing so totally and unpredictably reveals many new aspects of the songwriter is a striking and welcome thing.