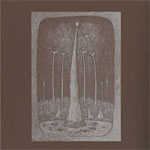 Scream At the Jackdaw, Make Him Stop

Let’s be perfectly honest, let’s all of us be blunt: this stuff requires patience. I mean, this stuff has an easy enough veneer. Six songs skulk through promises of folk, and all the ingredients are there. Hushed vocals, pulled further back into acoustic guitar arpeggios by softer female vocals, put little effort into breaking key or cutting up the calm. In slides a bed of harmonium and viola. Instead, the fervor of Peril Hill’s debut is in the mythos of their lyrics. Working in coiled-up swaths of anachronisms and arcane dirges, the pace of Scream At the Jackdaw, Make Him Stop allows Marc Gardner’s stories to unwrap into plain, epic horror.

So, this is patience of the constant grimace kind. We’re talking about patience in transparent blue bottles stored for age above the cabinets in your kitchen. This patience shreds your throat and your insides so exquisitely that getting better just isn’t yet an option. Jackdaw is slow. More than slow, it slithers.

Opener “Siren” --- although “opener” is a difficult term because the album acts more like a long, dark lullabye --- is a quiet ode to the mythological creatures of its title, awe-struck by the natural magic in their music. Gardner calls the Sirens’ song “divinity” and whispers:

And bellies filled with fledgling birds
That picked and pecked the sailor’s chest.
And they bewitched were lead to rocks
Where mothering birds would make their nest.

The six passages follow similar lyrical construction, usually wrought in couplets or four line stanzas with exchanging end rhyme. Syllables per line never go much longer than eight, and choruses are a rarity to decipher from the flow. Mostly, Peril Hill’s words are carried on plodding acoustic guitar that, like in “Siren,” is crowed by scrappy banjo and deep, multi-tracked strings. Troubled by the inklings of grander arrangements, the songs trade pop anything for an old weathered rhythm too meticulous and, well, too patient to expect anything less than total arrest of the listener. If the melodies weren’t so wooden and brown, the mix could almost be called glacial. But, as sleepy as it is, Peril Hill’s folk is pregnant with impulse and ecstasy... dependent on that stuff, really.

“It Will Be Your Undoing” has another lick of incredible lyrics, sung alongside Fiona Kennedy’s half-hearted hum:

This will be your undoing.
Siphon off all the black blood inside.
We want you here like we want a storm.
Dust off the cans of insecticide.

Sure, Jackdaw is horribly rife with portent and the blackest of moods, but its characters are acutely aware of the dissolution of everything around them. Decay is the only consolation here; the Sirens will eventually be defeated, funerals will lose their congregations, and ashes tossed over the side of a boat will drown. In fact, the album itself winds logically to “Clarion Call’s” last phrase, “Maybe we’ll leave the place we went to die”: the Sirens sing of an oppressive, dissolving natural order, a funeral then chokes the living, a man later casts the ashes of “the woman [he’d] loved all [his] years” into the sea, and we're left to imagine families that never existed in the hopeful nomadic tale of a gypsy band of fathers, mothers, and children.

What is less apparent than the eloquent words I’ve so easily butchered by copying out of context (okay, I’ll admit it, I transcribed the whole deal; they’re that great) is the sway of the songs’ crumbling progression. “Regalia,” the only song besides “Clarion” that has a truly discernible chorus, paces a mildly staccato acoustic line with dirty, repetitive moments of strings. Gardner's dusty croon is like Will Oldham’s, only not prone to crack. In “Vapours in August,” a banjo, at its fullest, creates a tiny melody that’s barely scoured by the obligatory guitar. When the banjo loses gumption, Jon Marshall's harmonium grows louder, violas mix, and Gardner begins to suffocate. He knocks a slight beat into the body of his instrument to fight back. Although Marshall's contributions with the harmonium are muted at best, his former collaborations with Kennedy in the ill-fated Deerpark translate nicely here, with Gardner.

The tone of it all ends up a tired acceptance. The players find their places, do their part, and back off. Here and there, when something overstays its welcome, as in “Siren’s” refusal to end or in “Clarion Call’s” chugging conclusion, the wait can be grating. Now that will try anyone’s patience.

But, while we’re being frank… I haven’t been so delicately moved by an album since David Thomas Broughton’s The Complete Guide to Insufficiency (2005). Like that sweet piece of work, Scream At the Jackdaw, Make Him Stop is exhausting fare. Cannibalistic, yes, and it takes some time to watch your body nibbled so thoughtfully. Could be flat out boring. But it’s been a good year so far. You know, two movements and all.