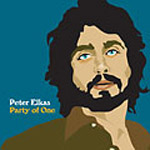 Montreal's Local Rabbits were one of the best bands Canada's east coast had seen since mentors Sloan were last seen strutting the streets of Halifax instead of trading places as perma-fixtures in the back of Toronto's Lee's Palace. No lie, they were Great: not only had they toured and backed the magnificent Neko Case for some time, they'd released three terrific albums (not counting the Super Duper EP/BK's Down single, etc.) in their own right: 1996's You Can't Touch This, 1998's Basic Concept and, what is very much believed to be their swan song, 2002's This Is It Here We Go.

Now, you probably see the words "swan song" and "they were great" in there and figure it's not worthwhile to even dig into the Rabbits' not-so-extensive back catalogue, but you'd be disastrously wrong; not only were they more diverse and interesting than more recognized east coast acts like Super Friendz, the song-writing team of Ben Gunning and Peter Elkas were ridiculously consistent, toying with their singular combination of pop, funk and indie-rock like no other group before them. Great introductory cuts litter each album: "Missing Out," "At Least You Got the Cake," "Never Had to Fight," "(Sally Ann's) Style Denial," "(She Said) You're Such a Stupid Idiot," "High School Hierarchy." Take your pick.

It's little surprise that Elkas has gone on to record on his own after the Rabbits' demise, but without the long-standing chemistry of his ex-group (the Rabbits were founded at age fourteen), serious questions of his ability to carry an entire album start to arise. After all, Gunning had written the lion's share of Here We Go's best tracks: "At Least You Got the Cake," "The Lights Turn On," "Purple & Grey," "Drag Out the Barrel." Which, besides making his own upcoming Beigy Blur (recorded, like Party, by Don Kerr at Canadian institution the Gas Station) all the more exciting, puts an awful lot of pressure on Elkas to prove his own abilities here. It's hard enough getting people in this country to listen when you don't shit your pants when they're paying attention (the Rabbits had a respectable following up here), let alone trying to win them back after-the-fact. Just ask Matt Good.

Elkas isn't one to go half-assed, though, and Party is ultimately stronger than many will figure him capable of. "Ultimately" being the key word here: outside of a series of instant highlights ("In My Den," "Build a Harmony," "Only You," "Still A Flame")--and despite Elkas' parasitic personality and unmistakable Ron Sexmith/Joel Plaskett vocal timbre--many of these songs are less immediate than your average Rabbits track. "Stepping Stone," "Everybody Works" (a romanticized ode to loving your job that Bob Kemmis would have killed to write) and "Gone, It's Gone" lack the ingeniously over-the-top hook of "Never Had to Fight," but after some initial disappointment, each starts to come together--a verse here ("Gone"), a chorus there ("Skipping Stone") that outweigh the record's several temporary lulls.

"In My Den" is an outstanding R&B/pop/rock hybrid, delivered with the preciseness of the Rabbits' best; the prolonged guitar solo is especially welcome, and a couple of its hooks are as immediate as pretty much anything from The Slow Wonder (save, perhaps, "The Town Halo"). He pulls out an odd "Tender"-era Damon Albarn/faux-Prince swagger for "I See Fine," and gives "Den" some serious competition with "Build A Harmony:" a particularly potent blend of an upbeat "Poured All That I Got" and a Sam Roberts bastardization of the Band (check the chorus, it'll sound less ridiculous). Hell, he even tosses off a Marvin Gaye homage that makes Remy Shand's should-be-punishable-by-death prefab R&B-isms even more lazy: "Turn Out the Lights" goes all or nothing, keeping the tempo uniform and stripping any modern undertones or self-confidence in his pleas to keep his relationship from collapsing. Like Here We Go's adult contemporary/funk mash-up "Pass It To You," that he kept this from being a disaster is remarkable. The melody? Not so much.

Elkas described the Local Rabbits as being "a walking party," and his solo album's title isn't lost those that get his self-depreciating sense of humour. Gunning added an essential variety to all of the Local Rabbits albums that is sorely missing here, just as Elkas will be missed on his record, but Elkas' party of one is, for the most part, solid. So forget all that "not as good as the Rabbits" bullshit above: the sheer amount of styles sucked into Elkas' repertoire here is commendable in and of itself, but even more incredible is his ability to make the singular whole of Party's influences convincingly essential. Sure, it doesn't have that extra spark that made someone like Jeff Buckley an artist who'd get obsessed over, but when Elkas hits his stride, there's truly nothing else quite like it.