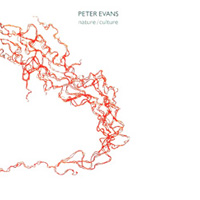 I can’t compete with this as far as a survey of Peter Evans’ technical and conceptual accomplishments is concerned, not to mention pure geeked-out fawning thinly veiled by academic rigor, leading the author to go balls-deep and decide Evans represents nothing less than the “cultivation and refinement of an exhaustive and totalizing virtuosity.” I don’t disagree necessarily, though there is something about that rhetoric that makes it almost impossible to disagree, as if the virtues of the album were self-evident and irrefutable.

I do want to focus on one slightly less august statement that the author makes: “the moment anything is possible is the moment we stop caring.” For all it accomplishes, it’s equally inspiring to think how much Nature/Culture, a virtuosic solo trumpet record with electronics, could have been an unrecognizable, anonymous mess. There have been other prominent jazz instrument + electronics solo artists—C. Spencer Yeh’s violin work comes to mind—but it’s hard to think of an example where electronic manipulation doesn’t essentially mask or blur the physicality of the instrument. What Evans hints at, at the very least, is a kind of Iron Man Evan Parker, able to coax an unparalleled amount of “wrong” sounds out of his instrument, but capable of using external effects as a natural extension of his own body.

And yet it’s not even really accurate to call it an electronic record, except insofar as Evans is equally concerned with texture as he is with the actual notes. It’s almost impossible to believe that the first disc of studio recordings was played entirely without effects: the closest he comes to studio manipulation is with the overdubs on “Five” (five trumpets, presumably), a gorgeous Deep Listening-style drone that sounds like a minimalist version of “Alice” from the last Sunn O))) album. Evans escapes the pitfalls of the style mainly because you can actually feel his breathing and it sounds like the whole thing could dissolve into chaos at any moment. Take note, bedroom ambient cassette artists: “meditative” and “sedative” are not the same thing.

The rest of that opening disc is conducted, presumably, entirely with just his horns, mouthpieces, vocal utterances, various mutes, and creative placement of mics. And yes, as many of us CMG avant-garde fans have reiterated, we don’t give extra points automatically to “Look Ma, no hands”-style virtuosity, but a large part of the appeal (at least for me) of solo performances is the way they wrestle with limitations, not to mention the intimacy involved in a solitary individual working out the possibilities of an instrument in real time. More sophisticated solo electronic artists, for all their strengths, usually lack that vulnerability. Even in a live setting, they typically have an infinite number of presets or pre-recorded sounds to draw on.

But maybe “struggle” or “unsophisticated” are the wrong words to use. After all, we’re talking about a guy who can sustain pedal tones on a piccolo trumpet, or play within a huge range using the wrong mouthpiece. Whose circular breathing makes me want to play this in an oxygen tent just to compensate. Evans is only 28, a good generation-and-a-half younger than Parker (which is fascinating both because Parker has had this much time to refine his craft and because it’s kind of startling that, as far as I know, no other trumpet player has come along in the past four decades that could serve as his brass equivalent), but already he seems to bring a lifetime worth of refinement to his performance. He raises the incidental sounds of the horn to the level of an art-form as versatile as the traditional methods of playing. On “Micro” the air barely escapes the horn, creating all kinds of fissures and overtones. I’d say it sounds like a dying breath, except that it proves to just be the warm-up for the 18-minute “Macro,” where a truly frantic display of circular breathing techniques builds off of a constant low rumble, often sounding like multiple instruments at once.

This isn’t for the faint of heart. Tracks like “Macro” remind me of Prurient in the way they go on way longer than they need to and find some strange, claustrophobic middle-ground between vulnerability and impenetrability. There are easier moments to sit through though: “Full” is a blast, Evans spitting and grunting behind the horn, sounding like a brass version of Yamatsuka Eye. “Jazz” really is jazz of a sort, a rare moment when he allows his trumpet to resonate (using some really effective mic placement) and a good illustration of how much control he actually has over his instrument. None of these titles lie, in fact: “The Chamber” allows very little light, effectively simulating what it’s like to be inside of a trumpet with someone playing it.

The second disc consists mainly of a continuous improvisation and is, I suppose, rawer than the first one insofar as it doesn’t have quite the massive tonal alterations. There are still some incredible moments of defamiliarization: halfway through “a,” presumably by way of light breathing and a volume pedal, he somehow makes his horn sound like a distant drum kit. “b” continues in the same percussive vein, creating a haunting but surprisingly full sound out of clacking keys and amplifier feedback. Towards the midway point of the piece, Evans even allows himself something that could be called “lyrical,” in all its shapeshifting energy. Culture may have inspired him to reinvigorate a genre in which it often seems like everything has already been said, but that indescribable way he approaches the limitations of his instrument and manages to find realms of expressive possibilities within them is pure nature.