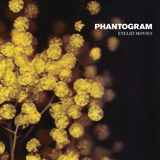 Phantogram is an electro-pop duo from Saratoga Springs, New York that recorded their Barsuk debut, Eyelid Movies, in a barn in the woods, or something, but they sound closer to an electro-pop duo seemingly borne from the very pre-historical firmament where electro and pop first fused. They’re an archetype so successful in embracing that there’s is little time between realizing this band exists and seeing a free download card for “Mouthful of Diamonds” on the counter at Starbucks. As Saul Williams once intoned to a crowd waiting to hear the Mars Volta play, as soon as an idea is thought it’s instantaneously, physically manifest, at least for an era where an archetypal electro-pop duo from nowhere upstate New York is quickly signed to Barsuk and before releasing a debut or given much promotion at all is exposed to millions of people otherwise never mindful, and pleasantly so, of art-school dropouts and their barn-reared, hip-hop-revering electro-pop duos. Think somewhere in the gene pool between High Places and the Kills: a youthful female vocal with good skin and awesome bangs is buffeted by an oceanic pastiche of shoegaze, R&B, indie rock, house, and folk while she buffets the same with a dead, unwavering stare, forever lonely and cynical despite the crowd of sound lapping at her. This exists for you to have a crush on.

Half of it, at least—the other half consists wholly of Josh Carter singing. He’s the guitarist, beatmaker; Sarah Barthel plays keyboards and is the other person who sings. The dichotomy’s pretty brainless, especially when one side embodies the record’s most digestible, exciting aspects and the other doesn’t…do that. Josh is the Eyelid Movies‘ de facto villain: from “Turn It Off” on, his voice is the opposite of everything Barthel’s accomplishes, his portions of steeply regimented pop structures all blaring and in your face where hers are soothing; his the scrape and wound, hers the suddenly cool unction wiped generously over. While this dynamic can serve, in action, to lift up Barthel’s voice to almost angelic heights, at times Carter seems to waste some interesting arrangements and pregnant moments in the beats he’s put together, distracting from how compelling they can be while dwelling over their technical flaws. “Running From The Cops” flips belly up as soon as he comes in, the tension built by the buzzing pall with which the track opens made comical by his jellyfish cadence. Its beat’s already a pretty garish display of how Phantogram can sometimes mistake loudness for depth in the mix, but Carter occupies the rest of the track with almost bratty filler, making the whole four minutes come off like unconsummated heavy petting. It’s not a bad song, just a monotonously tense one.

In fact, most of Eyelid Movies thrives on the tension between Barthel and Carter, except one never gets the impression they’re opposing poles in a romantic imbroglio (or that they’re even aware of each other), but that these two are fundamentally and irrevocably different, and that is all they are. Their lyrics are solitary, self-centered, bleak, and passive—never warm, personable, or tender. “As far as I can see,” Barthel bemoans, “nobody loves me,” a jittery mess of honeyed phonemes happily pocking the synth beneath her. Like a way more palatable Xiu Xiu, Phantogram masks ridiculously overbearing, self-involved emotions with cheeky pop detritus; the only way we can really react is by clinging to the pretty parts lest the others swallow us up.

But in practice and in total, Eyelid Movies isn’t a contrarian or particularly abrasive debut—it’s entirely likable, paced well and efficiently, dishing out a little something for everybody but never seemingly exhausted by this task. “All Dried Up” threads vaguely spooky Wendy-Carlos-brand synth striations into a Popeye’s forearm of a climax, and then another, and another, Barthel in step effortlessly. Opening duo “Mouthful of Diamonds” and “When I’m Small” follow a similar cadence, Barthel’s voice always the ignition before any contained explosion, but upon first hearing them they’re immediately satisfying, familiar, even totally alike but obviously capable of encouraging hundreds of iterations as equally stirring. There’s this moment with 50 seconds left in “When I’m Small” when Barthel confesses, “I’d rather die / Than to be with you,” and the song blasts open, the background gilded with what could be Carter’s guitar or Barthel’s falsetto squeezed like distended silly putty, irreparably, into a squeal. It’s all goosebumps, a logical, rewarding conclusion to anxious beats and teasing vocals and self-pity.

And this is how everything plays out over the course of Eyelid Movies: tension is built and tension is relieved and then a new tension is built and rinsed away and repeated. There’s nothing sexual about this, nothing romantic; mostly this is animalistic, like a kitten forgetting within seconds that you just pushed it off your lap for being annoying so it tries to climb back up again. But that kitten is really fucking cute and it’s obnoxious tendencies, though ingrained in its kitten-ness, only emphasize the cuteness, which means you can feel OK enjoying, maybe one day loving, something so carefully crafted by the higher powers in the universe to work so concisely, so ineffably, to make you love it. This is also the case for fruit smoothies with pomegranate in them.