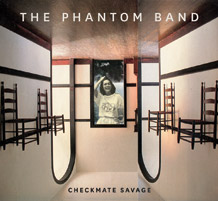 It was a shitty afternoon last Thursday, just right for watching Batman Forever. “Has it come to this?” I thought, even contemplating the latest Streets CD in an attempt to run from boredom. A full weekend of overtime was looming and here I was stuck to Val Kilmer’s nipples, watching them biff! and kapow! with Jim Carrey before burning snake eyes in my flatscreen. Luckily, one noble supervillain came knocking in the shape of a box from Chemikal Underground: those toothy lairds of beaten confessions whose releases feel like parachuted power-ups. You want rations, ammo, the hairspray you can use to make blast-cannons? A cake full of fake moustaches and some C-4 disguised as Hubba Bubba? Christ, you’ve got a big stomach. Luckily, the Phantom Band have got all the carvery skills to fill it, laying a table with such a deep feast scaffolding is required just to get past the starter. Their debut will slake you eleven times over if you’re after intelligent stuff that rocks, blowing out brain trenches in a blast of strange opium and leaving one feeling bulletproof. (I still am.)

Already being touted by hacks as 2009’s first big crossover, Checkpoint Savage blazes guitar energy with all the juice of an open-air power chord. Presumably having sprung from the same spinning mirror that held General Zod and his cronies in Superman (1978), the Phantoms touch down from No Man’s Land and start empire-building immediately, lining up various pop and rock superpowers to duel with psychedelic armadas. Marvellous, but hang on just a phantom-spinning minute: didn’t Chemikal Underground just tick the anti-folk laboratory box a few months back when they let loose Mt. Wilson Repeater? Maybe, but Checkpoint Savage wades along distinctly deeper shorelines, piranhas nibbling at the bones of indie that might peg it out as end-of-Mean-Girls music. “The Howling,” one of the record’s more straightforward of the nine pieces, is old-school Snow Patrol on Viagra: one in the eye for Gary Lightbody and the pact he made with the ambassadors of dadrock. Frontman Richard Anthony’s vocals wear his Scottish colours with pride, bonding the waves of ideas from the band as they master their snailshells and shelvaphones (they made that last one themselves from steel shelving brackets, apparently). “Throwing Bones” takes a rocket ship ride through cool Roxy Music and tweaks it with Jim Beam and acid—the homemade stuff with the seeds and ether that you have to chew forty times before swallowing. Cast your mind back and remember that steady drawl of your first trip—schemes, confessions, revenge—pouring out of you in raw divinity rather than whispered to a shirtless reflection. That’s the algorithm in play here and the Band cling to it like balloon string, knowing it’s as strange and valuable as baby unicorn shit. Follow the hoofmarks further and wig out with “Burial Sounds,” where black swamp and tinges of UK garage (it’s there, trust me) help gravediggers fend off Hell’s Angels.

Make no mistake, though: the Phantoms aren’t just a gaggle of gonzos who’ve been licensed to pound their own chests in. While Checkmate may glow like exploded californium and emit its sixty years of neutrons, it’s far too well done to overwhelm you totally and risk you shying from its lethal pink flash. The nine-minute “Islands” is flinty enough to run a full eighty seconds before you realise you’re into the slow track, and when Anthony and chums sing “Lord I swam / To the island shore,” you know it’s the most honest salvage you’ll hear this side of Will Oldham’s catamaran. These are the kind of comparisons the bigwigs are clucking about, by the way—Bonnie, Bowie, Zappa—and it takes just fifty-five minutes to see why: you can lose yourself in its knifey murk and then come up billowing rainbows. “Crocodile,” then, is the pot at the end of the beam, and the Phantoms throw the kitchen sink at this one (plus old socks, an oscilloscope, and the Yellow Pages for good measure). The result is an instrumental monolith that soars like a Wright Brothers biplane, piccolos and post-rock fucking in the sun to birth the pure taste of lofty fulfillment. Watch your wax wings at the back there.

I’m chancing my arm in saying the year’s best LP arrived with the first blows of Round Two, but good God this is fearsome stuff, this handmade mess that puts Radiohead’s “National Anthem” in a meat smoker and feeds pufferfish to a sick Seasick Steve. Down come the streamers, down come the dead fireworks, but the Phantom Band are mobilized, already making inroads on national radio with their edit of “Folk Song Oblivion.” See—sometimes all you need to repel the ice and receivership is energy. Energy and a dash of fresh cunning. Seriously, if Checkmate Savage doesn’t make you want to sail the high seas in the company of buccaneers while drinking your weight in spiced rum then I don’t know what on earth will. It saved me from crap film anticipation and that’s something, especially given the quality of recent Recession TV. Incidentally, the film I dug out straight after “The Whole Is On My Side” had faded? Dr Jekyll and Mr Hyde. Rouben Mamoulia, 1931, B/W. Classic.