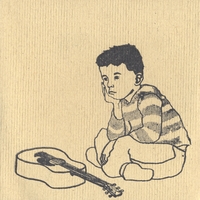 Whatever Happened To Your Loving Heart

Phil (Weinrobe: Massachusetts transplant now in Brooklyn) writes and performs countrifolk downers with post-rock vocals hiding in the closet. Over traditional one-two acoustic guitars and dry gumbo banjos, and way over a sly upright bass or a cello’s dolor, Phil chews damp scenery and chokes on mortality, his voice always bare and stark center stage. Phil Weinrobe is the affable whiskey connoisseur, the caring eyes behind huge aviator sunglasses; Phil is the beech bark voice haunting the warmer corners of Whatever Happened To Your Loving Heart, weathered if a bit stilted, emphatic about very little which sounds like it’s emphatic about general, worldly acceptance.

This debut album, for both Achord and the artist, is a sad affair. Admittedly, Phil’s said, it’s all about melancholy accounts, because if one can’t relate, one can at least empathize. This thematic resolution isn’t exactly limiting, for Phil is just one humble moniker in a spume of frowny faces, but with his gravel voice in the fore and both sleeves held together at the wrist by freeze-dried ventricles, these nine songs do seem more contrived than Phil deserves. And, tah-dah!, the Akron/Family helped a heap in these proceedings, each sibling appearing at least once. Ryan Vanderhoof produced. The Young God vein is aortic in Phil, his morose vocals the star of a slightly absurd and ramshackle communal-ish production. Only, where such bands—A/Fam, Angels of Light, Devendra Banhart too—seem willing to risk hardlined structure and copious arrangement for flighty, organic discovery, Phil slurps up and gargles the mire of his resilient ennui. Lets the grime rest against his palate. Inevitably, an album bored with itself is not fertile for much patience, and in Phil’s case, patience is the only tarry sedate enough to dredge up the songs’ moments of brilliance.

So, I guess, now the preceding sentence requires an example or two. First, try all of “Left Coast,” try its innocent, Midwestern gothic lyrics, try its anxiety bedded with smooth, smooth slide guitar, try Weinrobe’s voice, sultry but disturbingly juvenile. Most of all, fucking 92% on the CMG Sad-O-Meter: “I wanna be where the cars dot the freeways like the stars/ I wanna be where the songs sound like Beach Boys all day long,” and you know the singer won’t get any of this shit, won’t make it to California, because the best thing about his car is that it has a full tank and that it’s fast enough to sweep by local border towns where the good fortune of a family is measured in scratched lottery tickets. In fact, where the album’s “brilliant” moments are, at the most, ephemeral shadows of a bowless violin or an awry harmony in “Used Up’s” string-soaked chorus, Loving Heart’s most memorable parts are ostentatious and campy. “Bourbon Love” is plain silly, but still, ya know, sad, obvious as a clever comparison of bourbon to a lady love, and obligatory “The Happy Song,” complete with cacophonous sing-along, is about as sarcastic and self-referential as Destroyer can get. Despite the dynamic face these songs grant the album, neither can make it off the fence between tired alt.country blandness and deeper reflections on depressed, lost love songwriting. But what this explanation pretties up is the soggy uniformity of the album, the incessant, plodding twang and pitiful lyrics.

Mark Kozelek comes to mind as a spiritual lifemate, in a sense, for Phil, sharing meticulous, even rigid, attention to detail with a naïve poetic voice. So maybe Kozelek channeled a secret lust for thick post-rock riffs into Phil’s dainty backwoods cortex, and maybe Phil’s still too wed to a self-conscious artistic purpose to let the cosmic stuff color more than the legato verses of “Joke’s On Me” or more than the startling interlude of swampy musk in the middle of “The Sucker.” Maybe Phil should take some more chances. Sounds too comfortable for his own good. Sadness isn’t ever really comfortable, and neither is love, which is why Phil’s got so much room and so much fodder for many, many sad albums to come. Which should be taken, ya know, how one will.