Other Records by Phish 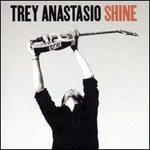 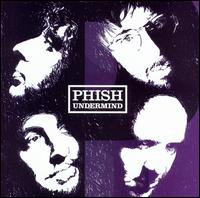 By this point even the most pretentious indie-snob knows that Phish, oft-derided jamband extraordinaire, has decided to call it a day after roughly 21 years. Undermind is their tenth, and final, studio album. What makes this unusual is that Phish seemingly had no plans to break up while the album was being made, and press interviews from early 2004 even had band members proclaiming that the future was as bright as it had ever been. But guitarist and de facto leader Trey Anastasio thought otherwise, and I’m sure many a bowl was smoked in silence after Phish phans opened their e-mail boxes two months ago to learn that Phish’s current summer tour would indeed be their last. So Undermind is essentially a swan song that wasn’t envisioned as such; but I’m sure this won’t stop hordes of stoned college freshmen from searching for subtle breakup hints within its fourteen tracks.

Full disclosure is in order here; I don’t own bongos and have never donned a piece of hemp jewelry, but I’ve seen Phish 33 times. Attending high school in a predominantly white, upper middle class suburb in Connecticut will do that to ya. I was hardcore. I was there (in the front row, no less) when Phish began their second set on November 29th, 1997 with a version of “Runaway Jim” that lasted 58 minutes. I was also there the night before when traditional set closer “You Enjoy Myself” was played as the second song. I even spent three days of the summer of 1997 at “The Great Went,” a Phish-y camping festival of sorts in northernmost Maine where the main attraction was six sets of your favorite band in one weekend. Surveying the crowd at the Great Went would do little to dispel the stereotype of Phish fans being dirty trust fund hippies, but I’m still convinced that far more indie-rocker types listen to this band than they care to admit.

I know for a fact that Phish themselves listen to indie-rock; Trey Anastasio used so much press in the late '90s to profess his undying adoration for Pavement that Steve Malkmus can no longer get through an interview without being asked about the Phish guitarist. The band even went as far to cover “Gold Soundz” at a Pittsburgh area show in 1997, a move which I’m guessing baffled a lot of record store clerks who failed to understand why so many bearded guys with dreadlocks were snatching up copies of Crooked Rain, Crooked Rain after the fact. They even jacked Bryce Goggin to produce their last two records.

The aforementioned Pittsburgh show was hardly the only time in which Phish has introduced their fans to bands that many would consider to be better than Phish themselves; their tradition of covering whole albums on Halloween (“musical costumes”) has led to hippies being exposed to such fineries as VU’s Loaded and The Talking Heads’ Remain In Light (to which they did amazing justice), and for some reason they couldn’t get enough of playing random covers in the Summer of 1998. The more notable among these would include the Beastie Boys’ “Sabotage,” and on one date, Smashing Pumpkins’ “Rhinoceros,” rumored to have been played in response to a Billy Corgan interview in which he bragged that the Pumpkins could jam harder than Phish.

But above all else, even at their absolute worst, a Phish show was never less than interesting, which is more than can be said for a sizeable number of indie-rock concerts. Face it -- hipsters attend rock shows to be seen, but too many indie shows are deathly boring affairs, consisting of anorexic looking dudes striving to make their songs sound indistinguishable from their studio counterparts. Spontaneity is non-existent. The four members of Phish are incredible musicians with an expansive song catalog far worthier than a hater would lead you to believe. But I saw Phish 30+ times for the same reason I watch baseball games; there’s an element of instant familiarity, yet you never know what you’re going to get. And when they were on, like in an awe-inspiring version of the song “Tweezer” from a Connecticut show I saw in 1995, you could think that God himself was about to descend onto the stage of whatever hockey arena they happened to be playing that night.

With that said, I wasn’t overly disappointed when Phish announced they were disbanding. I would argue that in terms of their live performance, they never really got better after 1997, and they’ve been basically mailing it in (by their standards) since 2000. It’s tempting to think that this is more a product of my maturing tastes than anything else, but that presumption can be rebutted by the fact that I still listen to mid-'90s Phish tapes on a somewhat regular basis, and Anastasio recently admitted on Charlie Rose that Phish hasn’t had a serious, full band practice in ages. The serious lack of direction in recent Phish shows seems to bear this out; while never sinking to the borderline unprofessional levels that the Grateful Dead did in their final years, clearly this is a band whose heart seems to be someplace else.

And so it goes with Undermind, a workmanlike effort that won’t do anything to harm the Phish legacy, but isn’t notable enough to make me wish that the band wasn’t packing it in. Produced by the seemingly ubiquitous Tchad Blake, Undermind follows the trend set by recent Phish albums in that songcraft and studio sheen is emphasized over improvisation, resulting in an album that while lacking the hairpin turns of their earlier work, holds together rather well. Blake even gets Phish to write the most overtly commercial song of their career in “The Connection”, a country-ish ditty that would have easily sat next to The Gin Blossoms and Counting Crows on the radio had it been released in 1995.

Truth be told, it’s actually quite refreshing to hear Phish so intent on writing simple pop at this point in their career, and Undermind is not without at least five or six songs that could have potentially become fan favorites had they been allowed to mature onstage. Despite the horrendous hippie title, “A Song I Heard The Ocean Sing” actually breaks a degree of new ground for this band, featuring decidedly Olivia Tremor Control sounding vocals and layers of psychedelic guitar that are far more Kevin Shields (who Anastasio loves) than anyone would have a right to expect. “Crowd Control” has a joyous '70s rock radio vibe, and “Scents and Subtle Sounds,” featuring an intricately composed section giving way to an airy jam, is satisfying in that it’s the one Undermind track bearing the strongest likeness to the Phish of yore (weed-riffic lyrics, too). The Fender Rhodes and subtle grooves of the title track have resulted in me dancing The Robot at least once, and keyboardist Page McConnell’s “Army of One” deserves a mention because it’s just friggin’ weird; a piano driven rock ballad sounding uncannily like Joe Walsh.

The remainder of Undermind is a mixed bag consisting of ill-advised two minute interludes (“Maggie’s Revenge”, “Tomorrow’s Song), the token filler track sung by bassist Mike Gordon (“Access Me”), and one “mature” ballad too many (in particular “Secret Smile," which was a notorious bathroom filler on the last tour). But does any of this really matter? Every self-respecting Phish fan has already owned Undermind for two weeks, everybody else thinks they’re completely horrible, and nothing I could possibly write at this point is going to change that. Undermind is a solid record from a unique band that existed for 21 years and has absolutely nothing left to prove. They’re solely responsible for some of my fondest memories growing up. Fare thee well, fellas.