1. A Picture of Our Torn Up
Praise
2. Be Dark Night 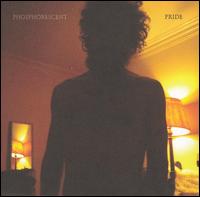 The most palpable success of Pride -- given the singular trajectory of each pastiche, the humility-by-way-of-grit that downs every note so that scared deprecation wins in the end -- is how thickly Matthew Houck seems rooted to the traditions of his gothic contemporaries. Not in a bad way, no. Like Iron and Wine, Phosphorescent’s hollow acoustic guitars and bedrock percussion mute regional boundaries, making catharsis catholic. Like Will Oldham or less obviously like David Thomas Broughton, Houck’s voice careens around solid tones, challenging the dearth and din of incomprehensible dread that seems to be, foremost, his deal. He’s being typical but he’s expanding the picture at the same time, posing behind suite conceits and disassembling uniform folk structures into repetitive beatitudes, like acting tongue-in-cheek but keeping dead fucking serious and not knowing the difference. That’s how he can be playful and precious without his shades of suffering…suffering, in the ways he shyly pushes the form of his sound just as adeptly as his ilk. Paint-by-numbers maybe, expected ape shit kinda, though Pride is perhaps the most sternly immersive record of 2007 and wouldn’t be unless it didn’t stick to the basics.

So, Houck enlisted help in some more of his contemporaries, bringing along for the haul guests like Ray Raposa of Castanets, Dave Longstreth from the Dirty Projectors, and Jana Hunter. Houck exploits them; at once, the congregation can be both devastating, as in the disquieting climb of “Be Dark Night,” and entirely immobile. “Wolves,” sliding carnival organs and ukulele under a wet mat of vocal harmony, under a cheap reverb-y toupee, just ends up feeling really long. After “At Death, A Proclamation” and “The Waves At Night,” two snipped shuffles that surpass any bliss Phosphorescent’s reached previously based on stunt vocal grabs alone, “My Dove, My Lamb” lumbers in to kill every rewarding, reflexive, warm thing the album’s got going. Not simply long, the shit is brutally monotonous, cut and dry back and forth, uninteresting (makes me make bitter half-sentences) flaunting of all the charm, latent iconographic buzz-faith, and communal goodwill that fans and critics and people think defines the genre in which Phosphorescent probably belongs, helps define, and struggles against.

Insularly, Pride doesn’t really work. Laid neatly side by side, Phosphorescent’s three albums work as dependent compliments, but Aw Come Aw Wry (2005) is easily the most interesting out of the bunch. Smack dab in the middle of Matthew Houck’s solo canon it operates like a hub, encouraging A Hundred Times or More (2003) and Pride to play the bookends. They play nice enough, moping in sync around their better if only to prove that, yes, Matthew Houck is capable of better, of yielding to what he probably sees as more indulgent impulses in multitracking and pop and multiple takes and non-stentorian drum schemes. Even “I Am a Full Grown Man” stands solo against, say, “My Dove, My Lamb,” and that means something, because at least a haphazard Dixieland bustle could relieve the tension Pride carries to the grave.

It’s that tension that phrases the album as a one word answer. “Pride” extends “Cocaine Lights” into listless noise but by then Houck’s disembodied from his music and the pleasant madness turns lifeless. The six minutes is unrelenting, the album is only remembered as the same, as an unwavering, unimpressive Phosphorescent album and an unwavering, brilliant take on the music Matthew Houck probably loves. Even if it doesn’t love him back.