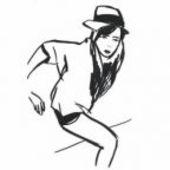 Released in November, it was unlikely this third full-length album from Pigeons would make an appearance on any of the top album lists that ran so rampant come year-end—and not only due to its late autumn release, but because if you find something remarkable in this album, it’s only in spite of the album itself. Or rather: despite Wednesday Knudsen’s and Clark Griffin’s washed-out, Urban-Outfitters-catalog-quality, laissez-faire attitude towards songwriting. While it’s become a personal favorite of mine over the New Years break, it’s an album that, well, makes itself as audibly accessible as the band has made their bio on their website.

The album’s small but—and I can’t emphasize this enough—very lovely aspects, they manage to just barely squeak past the album’s perpetual battle with its own French-infused, otherworldly, melodic remiss (its remiss even being one of those lovely things…for awhile). But still, if you churn it out through your headphones and hold your ears like a magnifying glass to the songs, Liasons is something I think worth hearing.

Having abandoned all moorings in west coast psych-pop, Liasons drifts entirely in its own ambience, with very few indications of song and even fewer indications that there are any sorts of structure underlying the weightless, track-by-track procession. And Knudsen’s vocals certainly only exacerbate the album’s weightlessness. The same way Sharon Van Etten has a uniquely appealing “boring” quality to her voice, Knudsen’s voice has a really wonderful sense of vacuousness, employed in a way that’s too unintelligible to be candid and far too distant to play off some earnest appeal. On the opposite end of the spectrum from “intimacy,” it’s a voice that touches me as a listener about as often as it touches the surrounding music. Which is to say…never, really.

Just like in the wilting-with-boredom figure in video “The Paradise”:http://vimeo.com/14143652 from previous full-length Si Faustine (2010), so does Knudsen seem irrevocably lost to ennui. Singing from far off in the haze, Knudsen’s presence has a dry, airy beauty and a vague, waifish swagger. Just like that Francophile girl at some house party, the one whose limp hand is only compensated by the dire over-intensity of her squinted focus. Who talks about taking pictures of her white, slept-in bedsheets and says she “doesn’t read Nin’s fiction because the fiction of her diaries made them redundant, n’est pas?” Or something. Right, full disclosure: the aspects of this album that grasp for the hip, chanson influence remind me of the lamest aspects of my seventeen-year-old “you really must read Proust” self. Or the self that dreamily mooned over so much Serge Gainsbourg.

Fittingly, the most “song”-feeling moment on the album is a charmingly re-tooled version of Gainsbourg’s “Laisse Tomber Les Filles.” While being immeasurably slower-paced and loosely rendered—the chanting chorus in lazy shuffle-march to the music—it has a striking and formulaic contrast to the rest of the album, which, by that point, really has ventured full-on into ambient, hot-house shoegaze. With the moody wails of a guitar winding and anchoring the song in a more emotive essence—moody wails at their finest in songs like “No Other Way” and “Pure”—smeared in dark, downward streaks like some morning-after eye-makeup, for a while balance, just right, the atmosphere of distortion that coats the air of the song in a fine, psychedelic film. The occasional yip-length scream or shriek breaks up the monotony, as does the retro appeal of elements like the (admittedly well-executed) jazz flute, saxophone, and the frequently-deployed tambourine, which, in songs like “Trésor,” sounds less like a rattling beat and more like metallic beetles scattering when the light goes suddenly on.

Liasons is an indulgent, transporting experience sometimes, even if not so emotionally involved as the luscious psych-folk examples set by Catherine Ribeiro or Brigitte Fontaine. But whether it’s the best parts of the perfume-light vocals, the unusual ornamentation, the vintage, Beirut-casual demeanor, or simply the great escapism all those elements allow—there are some really beautiful moments and chemistries happening in that detached, aimless, Parisian fog that the seventeen-year-old Francophile in me occasionally wants drifting around.