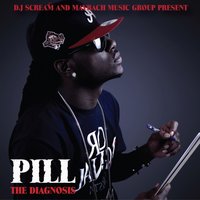 So, another rapper scrapped his official debut, decided to start fresh, and released the sessions as a mixtape. Today, that rapper is Pill, for whom The Diagnosis was supposed to be his first release on Rick Ross’s Maybach Music imprint. Whoever nixed this project—be it an A&ampR, Rawse, or Pill himself—exhibits keen instincts, or, at the very least, understands that an album is supposed to possess something resembling cohesiveness. It’s unfair to assume all of the material featured on Pill’s latest tape was slated to appear on his official release, but The Diagnosis is the sound of an artist having no idea who he is.

When Pill appeared on my radar with 4075: The Refill (2009), it appeared he was in step with Big K.R.I.T., G-Side, and others—a Dungeon Family revivalist who rapped about old school Chevys, his relationship with music, and societal ills. Then, puzzlingly, he dropped 1140: The Overdose last year, which was packed with aggressive, synth-driven production over which Pill almost exclusively spit about slanging. I’m all for unrepentant yay talk, but Overdose felt like either an exercise or play-acting. This is the dude whose best track is “Pain in They Eyes,” a vividly depressing song with verses about how fucked up life in the hood is, and whose hook contains the plea “All I’m asking, Lord, can you please get me off this corner?”

The Diagnosis reveals that Pill is confused, too. The most prevalent aesthetic on the record is the cool, South Beach sound of label boss Rick Ross, but Pill sounds clumsy over this sort of production, as he lacks Ross’s booming voice and goofy charm. Instead of pulsing through the beats or overpowering them, he just sort of stabs at them, his staccato drawl puncturing the glossy pap of tracks that feature R&B singers, which bleed glitter and form a pool at his feet. So, a song like “Tear It Down,” all slinky drums and a faceless crooner on the hook, sounds both boring and awkward. Someone as energetic as Pill doesn’t sound comfortable over a beat that sounds like it should be wafting from the speakers of a Bose stereo in an all-white room.

In other places, he interprets Wiz Khalifa (“Send One Down”), G.O.O.D. Music (“Thousand Poundz”), trap shit (“Scottie Pippen, Tim Duncan”), and the Lex Luger banger (“Pacman [Remix]”). Not all of this fails as egregiously as his attempts at Maybach Music—“Thousand Poundz” is quite pretty, even if it falls short of the amazing posse cut it desperately wants to be—but one can practically hear Pill’s compass whirring around directionlessly as he flips through the racks of other rappers’ wardrobes.

The best moment on The Diagnosis is “Spendin’ the Night,” a one-verse track backed by a nondescript electro beat with echoing drums. Pill lays down a verse about a girl he’s seeing, dropping in details like how he’s bumping New Edition on the way to pick her up. He sounds at home; his flow is comfortable; and I’m reminded just how pleasant listening to Pill spit about something as unremarkable as trying to talk a girl into bed.

“Spendin’ the Night” highlights the fact that, for a majority of The Diagnosis, Pill doesn’t sound like himself. He instead sounds like a less satisfying version of other rappers; the guy from The Refill is absent, perhaps scrubbed from the palette after being deemed unmarketable. Then again, I’m unsure how one markets a rapper who can’t capably mimic the style of others, either. Which: this is why we have mixtapes—they can function as rough drafts. Pill can dump this monstrosity onto the net for free, and develop something with a more distinctive voice. Hopefully, he knows what that might sound like.