Other Records by Pinch 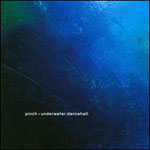 As a quick glance at that track list will reveal, Underwater Dancehall repeats it twice. The first disc features vocals from a series of collaborators Rob Ellis picked for this project (some insert their vocals over previously familiar tracks); the second offers the instrumental (and, in some cases, original) versions. It’s funny how innovative that seems, given the controversy over lyricism in the dubstep community (a controversy that generally indicates a split between fans of reggae/dancehall and fans of electronic dance music); it’s a move that essentially ensures that controversy for this album will be minimal. Fans of Pinch’s subterranean beats won’t have to listen to the sometimes cheesy vocals if they don’t want to, but either version of the album allows fans to navigate his music with a conscious nod to album format. And since Ellis is rightly venerated for his fastidiously sequenced DJ sets, the fact that his approach is so conceptual is hardly surprising, and neither is the fact that the sequencing here is pretty unassailable.

It’s funny, in a way: fans and detractors alike of dubstep have been getting increasingly concerned with the staying power of dubstep. A genre usually whipped up on 7 inch manifestos, the vitality of the genre lies in its immediacy, which tends to make these records brief incursions rather than entries in a coherent canon. So when Burial and Pinch release two staggering albums the same week dubstep fans rejoice, right? And even better: the albums sound completely different. If Burial molds vocal manipulations into a queasy mesh of pulsing ambience Pinch refashions the dubstep formula as an almost-orchestral affair: the typical substratem bass patches and percussion providing an obstacle course for wild, thick pads and sound effects that swarm like B and C plots through the major narrative arc.

I won’t dwell too much on the vocal/instrumental differences here. Let’s use “Brighter Day”/“Qawaali” as an example: the original, a butch baffle that made fluttery percussion sound starkly intimidating, captured the allegiance of dub and dance-heads alike. Reborn here as “Brighter Day,” Juakali’s vocals overtop range between vaguely uplifting sentiments that somehow flip smoothly over the brooding instrumentation and seemingly superfluous toasting. It’s quite clear throughout that Ellis allowed his collaborators pretty reign; it generally works for him, though the “Brighter Day”/“Qawaali” conundrum is a perfect example of where the album’s dual purpose leads: the songs don’t actually song that much alike: one is a serpentine apocalypse grinding slowly towards the occasional accordion explosion, the other a spiritual track of hope that transforms that accordion into a breathy prayer sign-off. Which is better? Hard to say for sure, since Juakali is in top form here, and his self-harmonies are freakin’ gorgeous, but the thick sludge that drives the instrumentation can clearly stand on its own. Or provide some dubstep karaoke, should you feel like attempting to replicate the brilliant melodies Juakali provides.

“One Blood, One Source” is the most reggae-roots track here, featuring some fascinating moody vocals from Rudey Lee that combine R&B reggae tricks with line endings that spiral innocuously into vague Middle Eastern/Indian sweep patterns. Ellis grows a furtive momentum from reversed synth stabs and a counterintuitive drum pattern that slows down a reggae pattern to cover like four measures and then fills the cracks with a bunch of gamelans, castanets, retro-house toms, hats, and claps—given the vague Japanese pastiche that breaks the flow just before the three minute mark, we’re covering a lot of territory here. Elsewhere, Yolanda’s presence on “Get Up” is intoxicating; her old-school house vocals split the difference between dubstep and dance music, allowing Pinch to build the track to an epic and concussive conclusion that marries a synth crescendo to the brooding techno drum patterns. Reminds me a lot of those old school Detroit joints that fizz and fuss until coherence sort of breaks through like a shaft of light. And then gets even fuzzier, as “Airlock” implodes around wind confections and groping punch hits.

The gorgeous “Angels in the Rain” is the best example of a track where the vocals seem official; Indi Khur’s plaintive wordless delivery is deployed like any other synth or sample, marshaling the direction and push of the track’s inevitable build over Pinch’s stereo synth bubbles and very basic drum pattern. Much of the intensity are the folds in the creases; filters that resonate around the basic figures, adding wonderful texture as Khur harmonizes with herself, her former vocal lines fading softly into a shimmering whole that drift back into the track proper. “Lazarus” rounds the album off, a thoroughly genius beat that plays uncertainty against confidence, at times sounding like the tape is being rewound just as it causes you to move forward. Pinch will only ever get away with this trick once, but holy shit is it impressive.

The rest of the album, with or without vocals, is less successful, though removing the vocals from “Gangstaz” makes it vaguely more palatable. Either way, the knock-out tracks are some of the most fascinating singles of 2007, and “Qawaali” is one of the best. Plus, Pinch has created momentary coherence out of a genre plagued with fleeting glimpses, and along with Burial has made a compelling argument for renewed interest in dubstep as a vital strand of electronic production. And of course, he’s also augmented the argument that we are accelerating towards less-firm boundaries between genre and geography. I still think we should be talking more about the political and post-colonial politics inherent in this transformation, but at least Pinch seems to be engaging honestly with Bristol’s history and diasporas, rather than hinging his music on the world waves he’s riding.