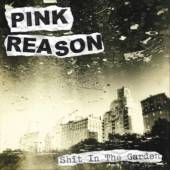 Shit in the Garden

“What do I do / Now that / I’m not / Strung out and alone?” This question, sung so plaintively on “I Just Leave,” hangs over much of the rest of Shit in the Garden. Hearing Kevin Failure’s (née DeBroux’s) second straight LP (though it’s really only an EP’s length) as Pink Reason for Columbus, Ohio’s brilliant Siltbreeze label (erstwhile home of PR allies Times New Viking, Psychedelic Horseshit, etc.), it’s hard not to dis-remember the dude as he of the prostrate vocals from behind walls of artfully illusive feedback, as nomad, and as general “shitgaze” progenitor. Because one casual listen through Shit in the Garden is enough to hear the massive change he’s undergone. Not only is this the most accommodating set of songs yet released under the Pink Reason moniker, but DeBroux himself seems to have morphed, phoenix-like, on some fundamentally spiritual level.

He’s not, for starters, murdering himself on nigh on every song (as he did on his cadaverous first LP Cleaning the Mirror [2007]), and he’s not, for super-seconds, even attempting to do that. He is (sort of) a changed man, or at least one more comfortable with the idea of the impromptu flute solo—because gone are the torpid chord changes and skeletal keyboard lines, the kohl-lined winks at the Joy Division playbook that has characterised much of Pink Reason’s output up to this almost jaunty point.

In the stead of all DeBroux’s abandoned, we’re dispensed a slew of unhesitatingly pretty melodies, electro-mutated glitch freak-outs, and (slightly) brighter vibes that, track for track, whip so much of what still passes as “lo-fi” “music” at the moment it’s, well, faintly ridiculous, even full-on virtuosic. For most of Shit in the Garden we get an un-moderated rock bent which lets its dingier moments soar into heretofore-unexplored psyche rock aethers where untethered keys plonkingly co-exist with guitars sounding like fire extinguishers and flutes sounding like guitars. It’s not “sort of” brilliant; it’s a mad-eyed, havoc-wreakingly brilliant good time, full stop. Call this Pink Reason’s flame-quoting ascension record into some joyously skewed “pantheon” and be done with the classifications until the album’s over, then hit re-start, burn some facile shit, whatever works for you.

But do listen first for the surprises. Opener “Holding On” even sounds a bit like Radiohead, though if Oxford’s finest were totally inverted: here the guitar line is buried under (and not dancing over) a channel-skipping beat which plays more like a sped-up cipher. It’s cryptograph-rock, and leads into the aforementioned “I Just Leave,” whose guitars run the gamut from bleak and frosty to runs of chime-like, sniggering harmonies that belie the song’s ultimate indecision. “Should I leave?” is what DeBroux is asking himself at every chorus, and the answer never comes. Pretty soon the circular guitar figures have built into a frenzied haze of confusion and what’s left is a retch of amp noise, an acoustic guitar on the verge of splitting strings, and round, annular thrumming that’s…actually fucking comforting. Well, should DeBroux leave all this? The question becomes meaningless; DeBroux’s confusion has been swallowed whole by the song.

It doesn’t matter anymore. This surety carries on into the record’s centerpiece and first (er, only) online single, the pamphleteering blow-out “Sixteen Years.” In its fuzz-edged orbit, we hear all the old popular riffs we know so well (all the Rolling Stones, Velvet Underground, Replacements) but recontextualized, or more accurately “returned” to their proper context—that’s away from the radio, from the advert, the syndicated TV program, and back to the refuge of the deeply sad and irresolute and lonely. “It’s been sixteen years / And nothing’s changed” is DeBroux’s salvo here, and one hears him appealing directly to the rejects wind-milling into an uncommon province of sneering, cassette-racked joy.

I could continue. “Here On In” is a beautiful fracas of Crazy Horse-indebted solo-ing, though it occasionally straightens into something leaner and more reminiscent of DeBroux’s damaged earlier work. That damage—and pain—hasn’t evaporated completely, and it drops back like a double shadow over the propulsion and big, big melodies that dominate this thing, four years in the making. There’s indeed a feeling of something very hard-earned about Shit in the Garden and it’s difficult to ignore—even after all the collapsed edifices of depression—the last track is titled, somewhat conflictingly (given its righteous flute solo), “You Can’t Win.” Well, maybe you can’t, but I think DeBroux has here, finally, in a big way. Though the cover art is by far the worst I’ve come across this year.