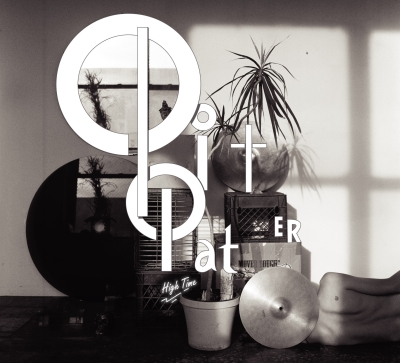 High Time, though their third album, is my introduction to Pit Er Pat, and it made me think of locations: paradoxical intersections formed in the decade between late ’60s rock canon and late ’70s New Wave, post-punk with enough sheen to sell cars, and city-specific subcultures turned inside out and laid bare for total consumption. I thought of a landscape where indie bands can put out terribly predictable and thoroughly pleasing albums to emit Deerhoof-lite cave echoes. It’s a pretty good indication of the health of the scene that an album can both draw from sources this diverse and be this boring. Or maybe we’re just talking about a mediocre record.

Pit Er Pat are so of their city (Chicago) and their label (Thrill Jockey) that they’re both an immediately comfortable and ultimately unsurprising listen, so one wonders if they’re simply too much a product of their scene to make an impact on it. And the spaces between High Time and what High Time could have been is best described by how the comfort of something so familiar might have been used to disarm rather that placate. Instead, what the band uses to suggest strangeness has been so thoroughly cycled that it resembles anything but. A good thing, too: were we still to find subterranean guitars evoking Eastern melodies an easy recipe for otherness, we really would be assholes.

The likewise stab at ominous by way of contrasting cutesy with minor key, minimal songwriting is diluted to the point of being ineffective. It’s precisely the band’s inability to unsettle, a basic collapse of premise and the stark absence of much else to grab one’s attention, that cracks the record’s façade. These are taut wires against empty sky; the problem is that to hang so much weight on the span, as Pit Er Pat do throughout, is to place all hopes on that solitary line. There are simply too few moments that attain that ill-defined space of a fresh listen to justify such an all-or-nothing approach.

In places the tripartite interplay of keys, guitar and drums makes playful use of spaces but in others, like the stunted “My Darkers,” the band treats us to tasteless, non-committal noodling. Pit Er Pat never seem to spread their limbs out into the spaces experimentalism provides—even more frustrating, given that “experimentalism” has been around long enough to provide well-trod ground and traditional sketch-patterns (another one of those paradoxical spaces). “Copper Pennies,” with its hesitant slinking and weak vocals, sounds like a band with a surfeit of talent unsure of what musical move to make and having neither the fortitude or interest to explore the moves they finally do make; “The Cairo Shuffle,” which manages to be both too thin and too plodding, makes one wonder if the minimalism the band employs doesn’t do justice to this destination they so tentatively embark toward. Sonically, High Time is starved.

This is, after all, the year that Offend Maggie came out. Perhaps Deerhoof’s biggest coup isn’t just the consistent excellence of their recent material or their prolificacy but that they don’t have to try very hard to make “different” indie pop. What other bands attempt in the name of reinvigoration, Deerhoof tend to create naturally. Pit Er Pat, a good band with otherwise serviceable tastes, aren’t playing to their strengths, just playing in someone else’s sandbox.