1. Footsteps
2. Fleeting Moments
3. Camera Angles
4. The Outskirts of Town
5. Cross the Line
6. Skating on Thin Ice
7. Sweetness and Light
8. I’m Not Going Out
9. Every Good Time We Ever Had
10. Paper Aeroplanes
11. All We Do is Rush Around 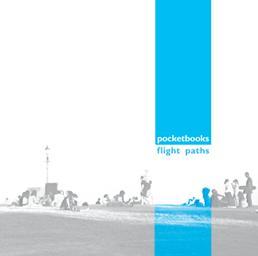 “Suspiciously quiet” whimpers Pocketbooks frontman Andy Hudson ten tracks into Flight Paths. He’s got a point—a hot new London indie band with almost a total anger lobotomy? Where are the swipes at the credit crunch; the puns skewering crooked MPs? It seems this fey quintet have a purer agenda, more concerned with boy/girl harmonies and finger-clicks than they are with bringing down Whitehall. But while the band may dress like volunteer biscuit-straighteners at a Christian bring-and-buy sale, they’re not quite that puny, holding court for forty minutes with their tales of polite city hi-jinx. If you don’t get the picture by now, go eleven seconds into first single “Footsteps” and see if you can stay still: spritely piano, spiraling guitar and semi-operatic diary entries; a twenty-four carat toe-tapper. I call it “tennis shoe rock”—simple, springy, white in sole, and suitable for all ages. No blisters.

The only problem is, of course, no street cred. In places, Flight Paths feels very strongly like reconditioned Belle & Sebastian, Isobel Campbell returned to vox and the lyrics lambasting effete hipsters instead of championing them. The moonlit twinkle of “The Outskirts of Town,” where Pocketbooks’ own Isobel Emma Hall documents her trip to the badlands (“Charity shops and blue flashing lights / I guess I’m naive if I think I’ll survive / On the outskirts of town”) paints the prelude to some bad vigilante film; a hopeful darling in potential hot water. A looped piano line keeps the mood light, though, and of course things end up sounding more Hans Christian Anderson than Ross Kemp on Gangs. Some parts of Planet Pocketbooks are even harder to visualize: the nifty Syd Barrett jazz of “Cross the Line,” for example, explores some hyper-real London, where you can be “asleep by the Zone 2 boundary / Awoken by the weary sigh of the ticket guy / Locating some young lady by his side…” Come off it—ticket guy? This isn’t 1969.

But then, just as you’re ready to place the ‘Books in the Tinker Bell box, it clicks: you haven’t bought tickets to some moody UK grooves here—this is funtime, not dubtime, so sit back and enjoy the gaiety. Once that thought takes off—took a day or two with me—Flight Paths can be a highly enjoyable record; Scott Joplin for salad bars. The celluloid stories and warm horns of “Camera Angles,” the rockafella twee of “Every Good Time We Ever Had”...it all begins to take hold, like being locked in a room with an irresistible puppy. Even “Sweetness and Light”‘s ode to student living doesn’t instantly make you want to set fire to things: the faint jazz organ and Cher stunts sweep you along like a yard broom (the kind not found in a real student house, by the way, where you can’t walk for tripping on Heat magazines). So you may have to suspend disbelief now and then, but imagination’s hardly a hanging offense, is it. When you read about the weekly teen stabbings or walk home every night to faint gunfire, you realize the Pocketbooks’ take on London isn’t uncomfortable at all—Flight Paths is a spritely little blighter, whose punchy snapshot of throwaway summers assures you won’t get killed by the runways. Just delayed, maybe.