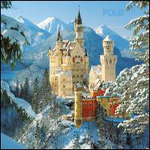 From Here We Go Sublime's synthesizers hit all the right pleasure centres; I like Chromophobia's kitchen sink approach to source sounds; This Bliss maintains a studious sense of balance; but I'm going to tentatively claim that Steingarten is my favourite techno or house album of the year thus far. It probably has something to do with the fact that I've never really bought into the trend of critics making concessions to electronic albums based on their dancefloor credibility. It always strikes me that what gets played in clubs has less to do with how well the music moves the crowd than the fickle, attention-deficit tastes of an audience. When I say an electronic record is "fun" it usually means pretty much the same as if I say a rock record is "fun" -- which is to say I inadvertently bob my head up and down while sitting in front of my computer monitor. I mean I like to dance when I have the opportunity, but reviewing albums is a lonely business. I'm out in the middle of the woods in British Columbia, and even if I were somewhere closer to a club, I can't really tell you if you're going to like Steingarten after 4 beers and a hit of MDMA.

My point is that critics can sometimes cover up a paean to artistic crassness by suggesting that this is a fair compromise in order to allow you to shake your ass without actually thinking about what you're listening to. And I get that it's necessary to talk about "dance" music in reference to what you would commonly expect to hear in a techno club; however, it's a lot more tenuous to suggest that an album's success can be gauged by how well it takes with DJs and their audiences. I like to dance, but I'm just as happy with music that gets my synapses firing. The fact that most people see a huge difference between the two reactions has more to do with a commonly perceived separation between physical and intellectual stimulation. People who want to be off the hook (for their taste, their actions, or whatever.) get off the hook by suggesting that physical desires are instinctual, ancient, and animalistic. This bullshit assumption precludes, of course, any chance that our desires can be progressive. At the same time, it provides ammo to dance jockeys who want to let music off the hook: why bother trying to get all preachy or academic or cerebral about music that is mapped towards those base instincts? If it services our asses, the argument goes, it must be the right stuff.

Look: I'm not trying to sound pretentious. I just want an electronic album that I enjoy enough that I listen to it more than once or twice before I throw it away. And I bring up these concerns because Steingarten, more than any other techno album I've heard in recent memory, epitomizes the complex relationship between popular dance music made for a dance floor and anything that's rather uneasily blanketed under the term "sound art" -- what most dance jockeys would see as cerebral. Artists like Pole (the alias of Stefan Betke) who have been around since the early days of glitch have carried a pretty rough reputation as a result of this marriage. The ease with which the less adventurous of these artists fade into the background allows them to be associated with naïve high art pretensions; it sounds good next to that Mondrian painting, and it's no more offensive or abrupt than a piece of furniture. Whether it's actually enjoyable is as much besides the point as whether those E-fuelled kids in an abandoned warehouse actually like that pounding drum n' bass.

Luckily, Steingarten is far less austere than many of its stylistic predecessors. In fact it prominently features squeals, wails, scratches, and other sounds that might not be out of place on a hip-hop album, were it not for its song's skeletal arrangements. These sounds are welcome not only because they lend the album a jagged, industrial edge but also because they give the rhythm a more solid foundation. Ironically, a lot of the minute clicks and cuts that pervade this kind of music (which often bears the rather misleading title of experimental dub) not only sound overly academic but also tend to be about as visceral as a Timbaland production, which is to say not very. Steingarten sounds closer to dub than most albums of the genre, not because it sacrifices the experimental side of the equation, but because it's noisier and rawer.

At the same time, this music is remarkably precise: just when you think the siren in "Sylvenstein" is going to shift the track into something looser, it retreats again into the mirth, as if the sound were no more suggestive than the minute, low percussion that backs it up. All these sounds are kept in tight harmony without anything really standing out in the mix. And while this strategy tends to give the album a fairly even tone throughout, it also allows for gentle melodic fragments to co-exist peacefully with dissonant feedback, like the tinkling xylophones sidling up to fat wah drenches on "Mädchen." Similarly, the liquid reverbed horn sample on "Schöner Land" rising out of light percussion and gentle squalls before fading into a sudden burst of static is all the more effective for its briefness; most electronic artists would milk such a delicious motif for all its worth. I don't even know what to say about the handclaps and accordion which dot closer "Pferd" except that the track sounds like what I'd imagine aliens dance to.

If Steingarten appropriates sounds typically associated with dub and drum n' bass for something far more naked and sparse, it's also true that it lacks the pretensions of most sound artists who tend to waste a lot of time on developing new kinds of cuts and clicks. Pole seems to have no platform here except to juxtapose as many varied kinds of sounds as possible, which, when it comes down to it, is all electronic music is really about anyway. If this album sacrifices immediate pleasure in favour of something more murky and cerebral, the long term gains are more than worth it.