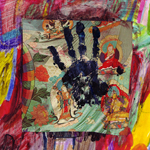 There are reasons to balk here. There’s that…packaging, watercolor-splashed like some Gen-X sitcom opening credits nightmare, all handprints and good times. There’s the inevitable fame (we’re kinda jumping the gun with this review) and the Wham! City hype, and though I like Dan Deacon enough I’ve always felt that there’s some specific drug I’d need to have taken in order to ever really like his music. And then (if such things are important to you) there’s Ponytail’s music, aspects of which stick out like broken digits. The record’s second half, for example, begins with two and a half minutes of what sounds like a kid making the sound effects for an airplane shooting lasers in a slow-motion dogfight. If that sounds annoying, it is.

Of course, before you get to all this whinnying you should probably listen to the first half, which in its small hands houses terrifying explosive power, just like the character GoHan from Dragonball Z. After a steadily exciting first few minutes of album-opening build-up—which is a tired-if-effective introduction—“Beg Waves” retracts and congeals into a big pop guitar line, a skittering coruscating guitar fantasia so sublime and welcoming that we welcome and understand the accompanying yelps and coos (which also sound just like the character GoHan from Dragonball Z). And then there’s this other moment that rules, it’s like the first seven minutes of “Celebrate the Body Electric,” so, all of it: a track that in its martial precision and unerring sense of sonic geography feels something like this year’s “Atlas,” some chants and breakdowns but mostly just hydrogen-bomb excitement.

Ice Cream Spiritual, then, is a very good debut—mewling, exotic and assured. In Ponytail’s wildest moments we hear the Boredoms; in their most sedate, maybe Talk Talk. I dunno, maybe. There are a lot of sonic touchpoints, but I’m reminded most of Love Is All’s Nine Times the Same Song (2006), only without the rigid structure to its pyrotechnics. I mean this in both a good and bad way. Love Is All created a record of a million climaxes, but things burst and burble at their leisure here, not at a controlled simmer but a random boil. It is all chaos and foam and the erratic trajectory of pop music.

It is, more than anything else, the sound of a band having too much fun being good to try being great. In this manner Ponytail channels childhood differently than the other bands currently straining to do so. There is, sure, the band name, and the track names, and that ghastly mess of an album cover, but other artists have copped kid aesthetics with way worse results (witness: I’m From Barcelona). There are the vocals, unchecked and unvarnished by the mix, but repressed squeals have been used toward literate ends elsewhere (remember: Joanna Newsom, Danielson). No, Ponytail comes across so righteously adolescent through their tangible, cartwheeling enthusiasm for loud shit, like they just singlehandedly invented Sound—which, remember, is the exact portion of being a little kid that ruled. Really: do you remember that shit? It wasn’t all summer evenings and wistfulness, re: Barcelona. It was fucking insane—pure anger, pure joy, pure Kool-Aid. Ponytail is in that space, and for now, it’s a thing to behold. Dolphin impressions and all.