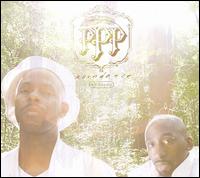 It’s odd that we writerly types are gesticulating adamantly towards Detroit these days, as if it’s just now flourishing and somehow worthy of our interest. That’s a half-truth. The D’s hip hop scene has unequivocally never been more fascinating than it is now: Black Milk’s ascension, Invincible’s incisiveness, Elzhi if he ever ceases the multisyllabics long enough to muster a bit more personality, et al. You’re acquainted at this point, but there is a foundation of artists to be praised (enjoyed, for that matter); after all, prominence is attained standing on the shoulders of one’s predecessors and all that. The perpetually exalted Dilla is eternal, but I’m talking about the guys who made this glut of joy. Wajeed and Saadiq have been around much longer than their debut, 2005’s Triple P, might suggest. Wajeed specifically has been lurking in the background since the early ’90s, DJing at Slum Village tours and presumably chopping it up with Dilla. To state tangible links is difficult, but there’s a certain incestuousness in Detroit’s hip hop scene. Everyone seems to know each other (for example, Saadiq and Wajeed were introduced by T3 in ’92, or so the story goes). Add to that the whole Okayplayer/Soulquarians networks of artists, greatly helped by the internet but still existing in some capacity before broadband, and PPP are well-known by the likes of Common, Badu, and their ilk. Quick story: Wajeed, who first started producing in 2000, was given a broken MPC by Dilla, which he was told he could keep if he could fix the damn thing. Wajeed toiled with it for a bit, figured out the issue, and the hardware yielded his first beats.

Why is all this important, exactly? Well, for one, ?uesto loves these guys, but, more essentially their sound is a pleasantly spry amalgam of their contemporaries. Abundance is an aptly-titled rush of exuberant soul, spontaneous without feeling tossed-off and sophisticated enough to hold up under scrutiny. But while it sustains itself through headphone listens, it is, at its core, meant to be shared, presumably perfect for substituting for polite conversation at gatherings. “Dirty Secrets” romps with a raunchy sonorousness, burbling synths and brash vocals meeting at the margin of danceability, and the title track flutters about in the same gospel-y manner the best of Dre 3000’s vocal work does. I would Wii Bowl and sip whiskey in good company to this stuff, basically.

What holds the record together, and elevates it beyond the sum of its parts—which are nothing to scoff at, incidentally—is the inherent delight injected into the compositions, perhaps because of the community Wajeed and Saadiq are so embedded within. To say PPP is merely two dudes from Detroit is deceiving. A more accurate summation would be that PPP is a producer, a multi-instrumentalist, and a host of extended family members. Coultrain and Karma Stewart are present on a good number of tracks here, and sound thoroughly at home, as do all the talented-if-somewhat-interchangeable guests that pass through. Frequently PPP sound something like an electro-soul band kicking out jams, and whoever is performing vocal duties happens to be heading the collective at the moment. This organic, familial feeling permeates the album, raising its stumbles a bit—masking them with cohesion, and coalescing the whole into an impressively showy strut across the dance floor, only to shake your hand politely and invite you to come shake your ass.