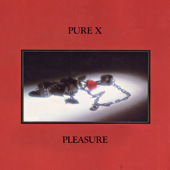 The signifiers don’t add up. Between originally being called Pure Ecstasy and releasing an album called Pleasure, with, of all things, that cover, on Acéphale, a largely dance-centric label responsible for stateside releases for artists such as Air France, Memory Tapes, and Korallreven, it’s easy to expect the Austin trio to specialize in some form of ’90s rave-influenced electronics, with the name serving as an ironic (or unironic) reference to drugs, euphoria, good times, or some combination of the three. That this isn’t the case at all feels like some form of manipulation, as if all parties involved wanted to poke fun at how easy it is to make one jump to conclusions entirely through associations before having heard a single second of music.

Contrary to all logic or expectations, Pure X is a guitar band, straight up, playing sun-scorched, texture-rich, understated bliss-outs indebted stylistically to Galaxie 500 and their heirs more than anyone else active during acid house’s commercial apex. Their songs deal in rich, gorgeously thick guitar leads encased in a distinctly Southern haze, somewhere between shoegaze and screw but neither as relentlessly loud nor as deliberately unfocused; at no point do any of these songs sound like three entirely different tracks played on top of each other with shout outs, nor will they ever be mistaken for such a thing beyond the wobbling synthesizer tone that begins album opener “Heavy Air.” Instead, the band deals in songs like “Dream Over,” where singer-guitarist Nate Grace’s falsetto provides an immediate, delectably fried hook in its first few seconds, with feedback drenching everything in its path but never being given the chance to swallow the song whole, and “Voices,” where what sounds like a skipping, mis-programmed drum loop serves as the backbone for something ambiguous yet clearly lovelorn and aching, as so much guitar pop past, present, and future has been.

If the trio has a particularly viable contemporary, it’s probably Real Estate, who began as a Galaxie 500 cover band but used that reference point to trade Dean Wareham’s snowstorms for stoned, low-energy beach trips. Pure X, on the other hand, sound landlocked, with Pleasure being the kind of thing one might make if they lived in a desert four summers in a row with nothing but a broken jukebox playing classic pop singles at the wrong speeds on a repeated basis. “Dry Ice” captures this feeling well, as Grace’s voice becomes strained and tense for a moment but finds itself reined in only by the fact that he’s been given so little of the mix to yell in, with additional guitarist Jesse Jenkins and drummer Austin Youngblood ceding no ground to the sudden change in tone. It captures a sense of inertness like few moments on any record, and it’s a surprise when it hits, unexpected and so crucial to the song’s success.

For another reference point, consider New Orleans duo Belong’s followup to October Language (2006), this year’s Common Era. Had their followup sounded anything like this—and captured a similar feeling to this debut, which sounds as humid, drenched, and unique as October Language did—I would’ve had absolutely no qualms with the drastic shift in direction that that band underwent. In the meantime, Pleasure essentially satisfies, even if I have to admit that it’s hard not to feel absolutely, completely, and totally lied to by virtually everything about Pure X that isn’t their music. Good thing that’s the only part that actually matters.