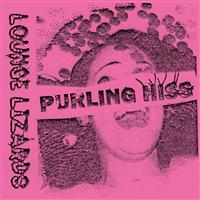 Purling Hiss (Philadelphia-based musician Mike Polizze) reminds me of that oh-so-‘80s scene from Back to the Future when Marty McFly, subbing for the injured guitarist, turns a pleasant-enough version of “Johnny B. Goode” into a crazed Van Halen jam, pulling off riffs behind his back and sliding around on his knees until he squeals to a halt, met by open-mouthed silence. “Maybe you’re not ready for that yet,” he stammers, “But your kids are gonna love it.” When I was treated to an ear-bleeding Purling Hiss show in Pittsburgh last Saturday, I felt a bit like those exaggerated prudes in their ’50s prom attire: I too was stunned into silence, cradling my aching head, wondering how a small band, particularly one small man, could make such an unholy racket. Kids these days, right?

Though I may not have been quite ready for the aural assault of Purling Hiss live, their latest EP, Lounge Lizards, offers the best of both worlds: melodic, languid slacker-jams that explode into guitar squall and noise rock. Polizze treats his guitar like it’s a child of 1985, but this combined with a classic garage-rock sensibility makes for an exhilarating, and only occasionally alienating, experience.

Though Purling Hiss released what might be considered a breakthrough album, last year’s Public Service Announcement (on Woodsist no less), it doesn’t seem to have fazed Polizze; Lounge Lizards continues, unafraid, to chart unpredictable territory. While things mainly ramble and squeal in equal measure, righteously, Lounge Lizards is somewhat tighter and more focused, genre-wise, than Polizze’s past work. And though listening to it can resemble a wild goose chase in search of structure, its songs aren’t shapeless—given space and time, each finds its own unique melody, one that slowly bubbles to the surface, oozing into form.

The standout track here is lead-off “Voices,” a perfect union of don’t-give-a-shit indie rock and hair metal soloing—two of Polizze’s specialties, after all. It could even pass for a muddy early-Pavement track as Polizze sings in a Malkmus-esque wobble, “I don’t want to be alone / Don’t wanna be stoned / I think I’m hearin’ voices.” “Voices,” and the subsequent “The Hoodoo,” argue in favor of Polizze exercising more restraint; it’s obvious he’s holding back, which does the songs a great service. Instead of shifting into soaring guitar heroics (a move that can ultimately feel stitched-on), he allows the songs to breathe, still patenting his own clear-headed yet urgent hybrid of indie and garage rock.

From there, Lounge Lizards seems intent on slowly unraveling. In the middle of the EP, with a song like “Midnight Man,” Polizze turns angrier, his voice gruffer. There are still melodies to behold, still hooks, but they recede over time, guitar revving up and cutting through all like a chainsaw. “City Special” is probably the most challenging of the lot; I need to check my iPod screen: Is this the next song? The same song? Is it a song?

But then the final track, “Karaoke Nite,” plays out epically—there are few intelligible words, but it’s blaring, it’s atmospheric, it carries out the EP on a wave of uninterrupted sound. “Karaoke Nite,” and in fact Lounge Lizards in general, is not humble; one can sense Polizze’s swagger as he contorts his guitar wildly, beating the crowd into submission. Lounge Lizards, as usual, is a dare: for their audience to keep up, for their audience to accept whatever challenge he feels like putting out there, and for Purling Hiss to keep balking at expectations.